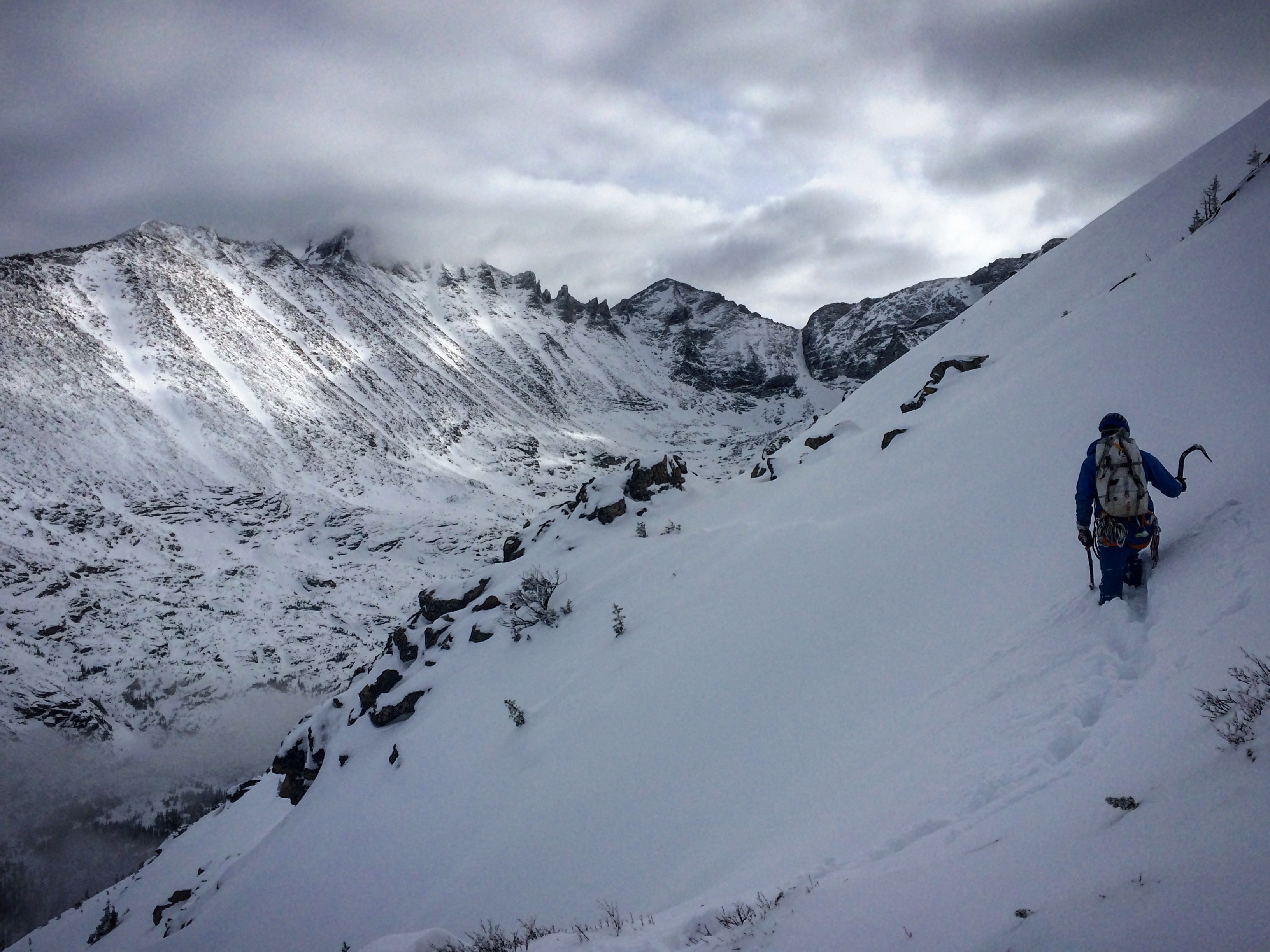 [This is an attempt to be more diligent about chronicling my mountain adventures in 2017. Because this is my personal blog, these posts will be quite detail-, gear-, and beta-intensive with an emphasis on recording the experience for my own benefit and not necessarily any kind of mind to writing something more compelling and appropriate for a wider audience. There should be plenty of useful beta for others if they happen to find these posts in a Google search (and are willing to wade through the minutiae), but mostly it’s to help me assimilate lessons and assist in my progression as a mountain athlete.]

On Monday (MLK Day), Jed and I got out for some ice climbing in Rocky Mountain National Park. I came back from Patagonia on the first of the year with my eyes opened to the majesty and satisfaction of true alpine climbing—i.e. routes and peaks that require a combination of rock, ice, and mixed skills, not just rock climbing at altitude—and a determination to start putting in the work to become more experienced in these complicated environments. All of the most inspiring mountains in the world require these skills.

In what has almost become typical fashion, Jed and I ended up climbing on a snowy weather day that came on the heels of a couple days of perfect weather. One of the many great things about climbing with Jed is that he seems to basically not notice this kind of stuff. When we climbed Alexander’s Chimney to Kieners on Longs Peak back in November, the day before was perfect weather, but the day of it was cold, blustery, and snowing all day. Same thing here: Sunday was bluebird splitter. Sunday night into Monday morning it snowed a few inches, making the roads a total mess, not to mention covering our intended route with a bunch of snow, too.

After almost two hours of slow driving on icy roads, we left the Glacier Gorge TH just after 8am. I was on my usual race ski set-up—65mm x 160cm La Sportiva RSRs, full carbon Stratos boots—and Jed was in Scarpa Aliens and a pair of 94mm x 170cm Black Diamond planks. The approach to Mills Lake went quickly via the winter shortcut. This cuts ascender’s right up the drainage before the usual summer shortcut. The few extra inches of powder made for some nice extra grip on the couple short, steeper pitches along the way.

Blurry photo for a blurry day. Jed skinning across Mills Lake on the way to AMU (out of photo, upper right).

Skinning across Mills Lake, the AMU amphitheater is visible up on Thatchtop’s NE face (Mountain Project route page), and Jed commented that it looked pretty thin (he’d climbed it one and a half times before). A lot of snow, not much ice. The night before I had asked if I needed a hammer on one of my ice tools for removing pitons and he responded that he wasn’t going to bring any pitons, only screws and three or four cams. Ok.

It’s approximately 1000′ of vert from the lake to the base of the route, and all the new snow meant that we were able to actually skin all the way, which is apparently usually not the case. We found a good line through the trees and deadfall (up a left-leaning ramp off the lake, and then following our nose up, sort of working our way climber’s right and up), putting in many kick-turns and switchbacks. We were super glad for this, as wallowing up through this much snow without flotation would’ve been a nightmare, but usually one is dealing with icy snow and much windfall. 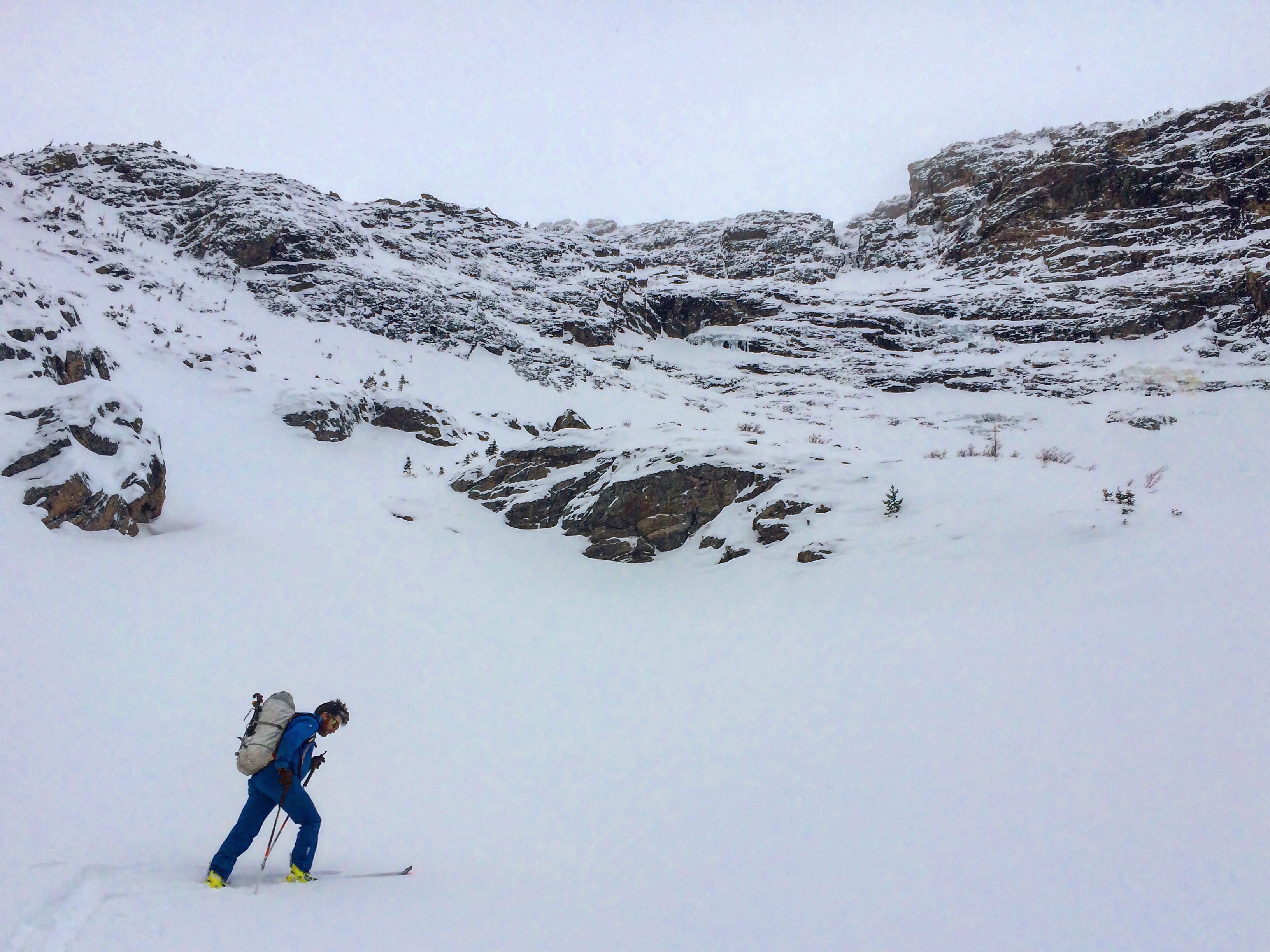 Final snow slope leading to the base of the (very snowy) route.

Jed’s more appropriate back-country ski set-up shined during this trail breaking and convinced me of the utility of such a system for future missions. When you each have ~20lb packs, the cadence on the skin-track isn’t very high-intensity anyhow, so adding a couple hundred grams to each foot is a worthwhile trade-off for increased flotation and security of skins with tail clips (my race skins rip from the toe with no tail clips; by time we got to the climb one of them had come half-way unstuck…which was actually better than I’d thought they’d do). My La Sportiva Vapor Sveltes (96mm x 168cm, 1085g) would’ve been a perfect option. Not to mention, these kinds of skis are much better on the downhill, too.

MP puts this route at four pitches and 400-500′. We didn’t have much ice to work with and found much loose snow covering rock (very insecure in crampons). Jed led up on our 60m rope on the left side of the amphitheater. There was a short initial step of thin, slabby ice (stubby near the top), a short section of snow, another short, slabby step in a shallow, right-facing dihedral (decent feet, good hooks), and another section of snow leading to a ~10-15′ step of vertical ice. Jed got two stubbies in this traversing ice step.

This ice deposited you onto an awkward, slabby rock step that traversed right under a roof before  pulling up into the roof (fixed pin and cam, Jed backed this up with 0.75) and traversing right on more slabby rock with terrible feet before finally heading straight up a snow slope to a belay at the base of the final pitch.

The crux was definitely the dicy traverse right after the ice step and then continuing to traverse up and right after the roof. The main problem was how insecure the feet were. In following (we simuled these first three pitches in one, with Jed placing a a Microtraxion on a 0.5 Camalot after the roof traverse), I found mantling up onto the ledge at the top of the ice step to be tough because there were no holds/hooks on the rock above the ice. The roof held good holds and hooks but was pretty steep and pumpy. I shamelessly hooked ‘biners and pulled on cams through here, just doing my best to not come off as the feet were heinous.

Appropriately, it took Jed a long time to lead through this section, brushing snow off looking for holds and making sure he was solid, and there is no way I could’ve led it. I felt close enough to coming off on top-rope. Mixed climbing is a delicate, tedious, careful process with seemingly almost zero sense of flow and lots of body tension. 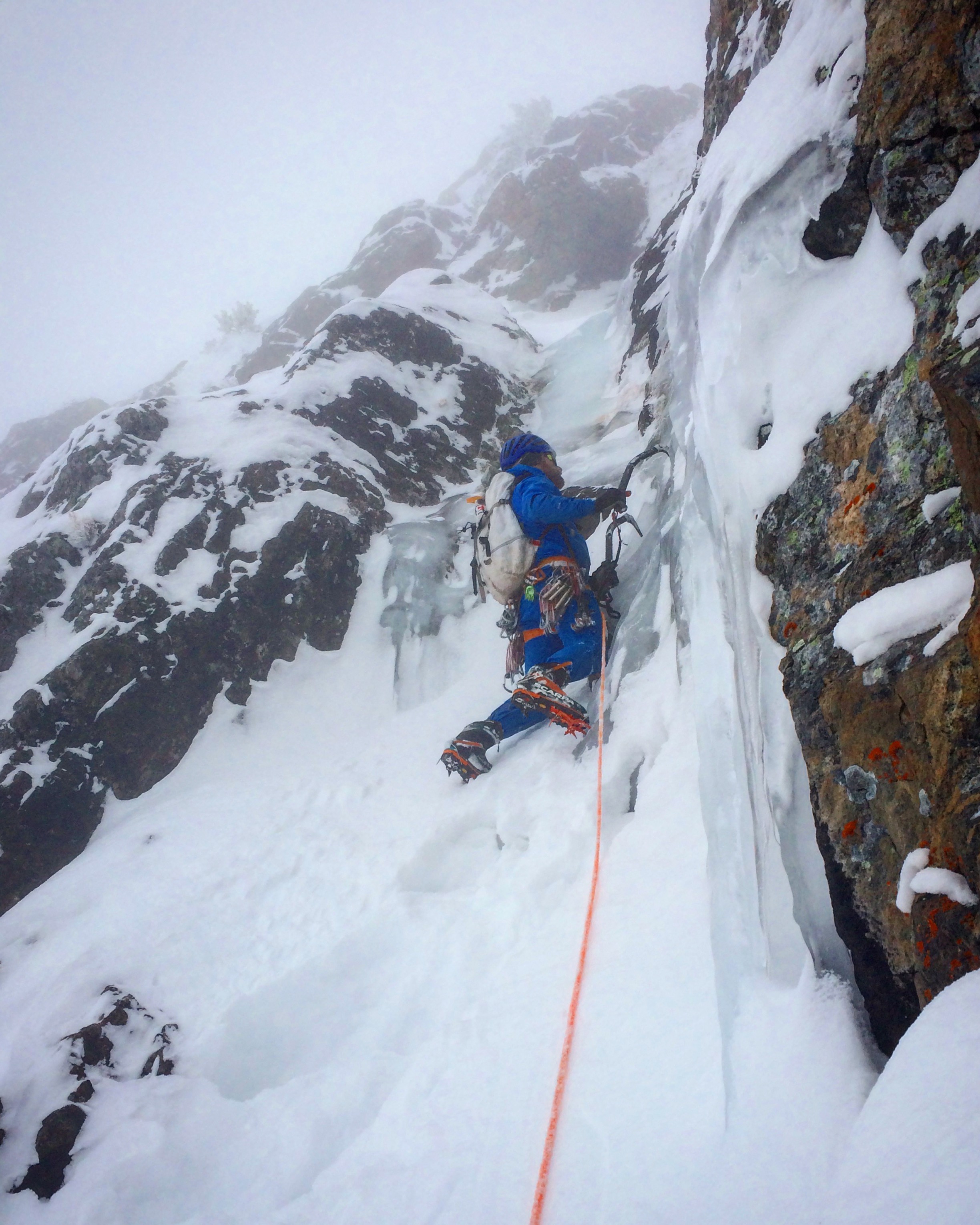 Jed belayed just below the final ice dihedral/chimney with a #2 and a slung flake as the anchor. This last pitch actually held a bit of ice and offered a few good sticks. I made it through with judicious stemming onto the rock on the left and a couple good turf sticks. 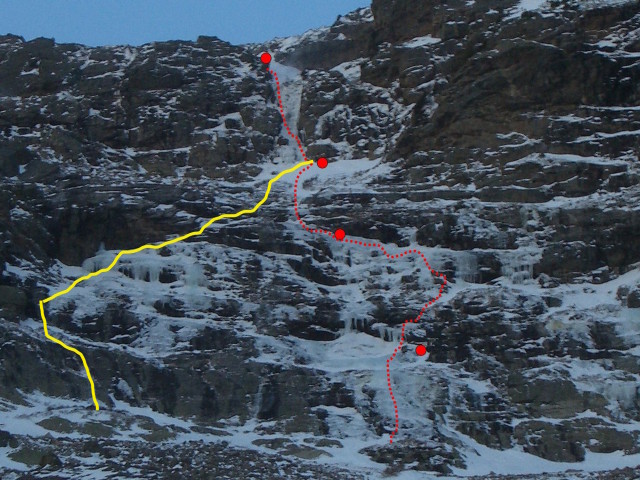 Our one belay was where we joined the red route line. Yellow line was our pitch of simul-climbing. Crux was the rightward traversing above the ice at mid-height (P2-ish). This photo is from my buddy Jason Killgore from a few years ago…Jed and I had much different (way less ice, way more snow) conditions.

Jed belayed from the top at a decent crack on the left and then it was just a steep snow slope to the top where we traversed climber’s left (south) to the snow hike descent back to the base of the route. There was a bunch of snow on these slopes, but it was all stable. We had climbed up and out of a thick pea soup of a cloud, and on the way down we had to descend back into this, which made finding our ski stash at the base of the route quite challenging actually. The base of the route was ~11,000′. 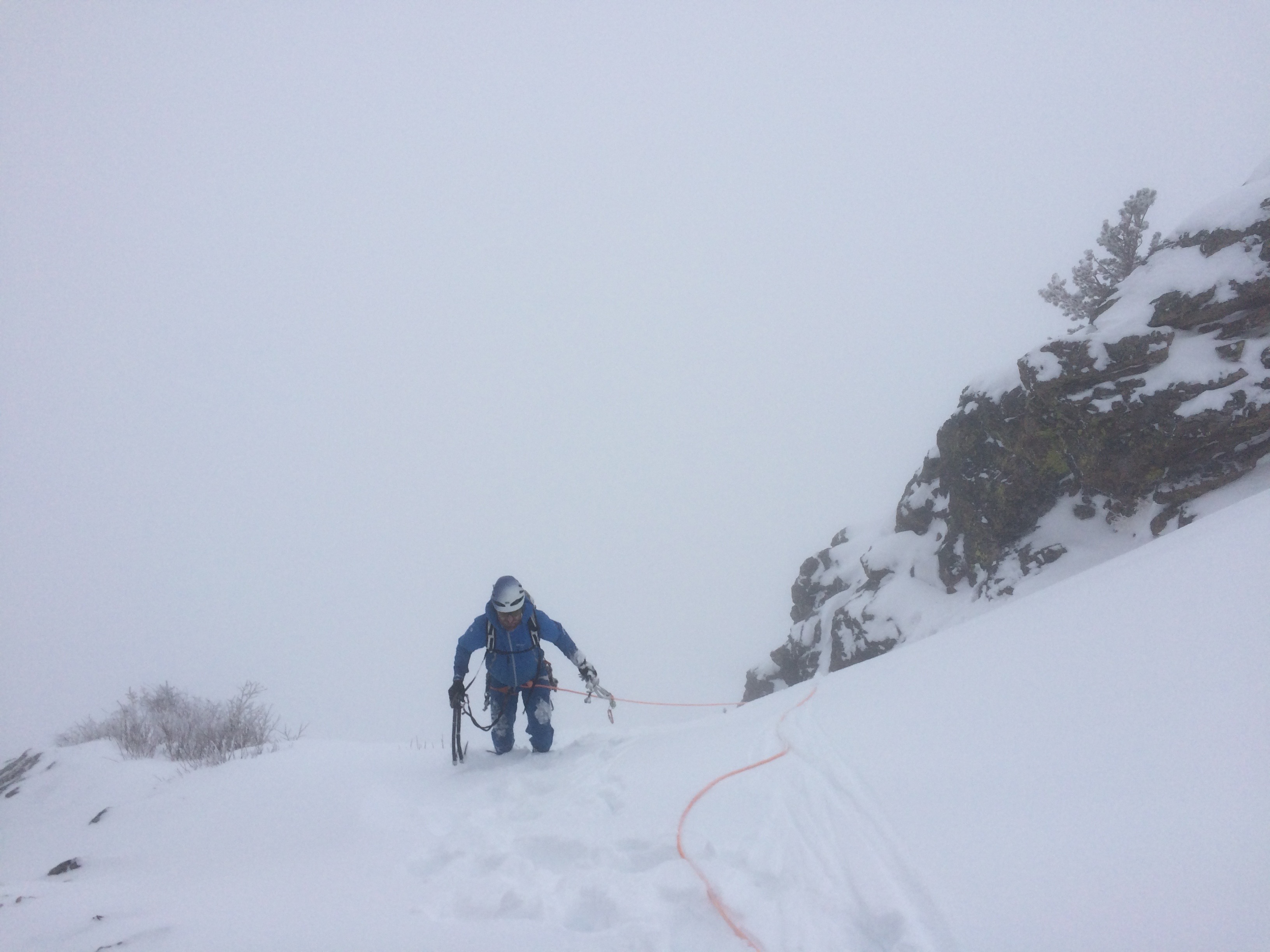 Snow slope at the top of the route.

Jed descending back down into the fog.

The ski back down to the lake was great—literally some of the best powder of my short skiing life—and then it was a lot of double-poling through the flats before some at times harrowingly narrow sections back down the singletrack trail in the trees. I was really thankful for the few inches of fresh snow here as it would’ve felt a bit kamikaze and dangerous (with the tight trees) in icier conditions.

-I wore knee-high compression socks, capri tights, and Laspo Troposphere longsleeve as my baselayer. Ski boot gaiters, Vanguard pants, suspenders, Syborg gloves, and Buff hat on the approach. This was just about perfect on the approach. Felt a little warm on the legs, but it wasn’t that cold of a day (20s?). For the climb I added a LS Stratosphere Hoody, BD Terminator gloves, and LS Stormfighter GTX jacket. This was perfect for climbing, but cold for the long belay of our first simul-pitch. I had a LS Pegasus 2.0 Primaloft puffy in my pack but didn’t put it on.

Suspenders are frustrating for me. They work well, but they often unclip. The Vanguard pants might not be quite water resistant enough for this snowy of a climb. But I like their non-flared ankles for tucking into the top of my climbing boots. Stormfighter GTX pants and Castle pants are too flared (though maybe I just need to get over this), and Colin’s style of a super lightweight shell pant just seems too fragile (and not warm enough for this application). Still experimenting.

-Packed everything in the Arc’teryx 45L Alpha pack. Had room to spare (even with helmet inside!), but that pack works so well, it’s great even when not fully loaded. I think it might be the go-to pack any time I’m having to carry climbing boots.

-Climbed with my Sitta Harness, Quark tools with only pinky rests, Dartwin crampons, Trango ICE boots. These were all great but I tightened my boots just a touch too tight making my toes unnecessarily numb sometimes, and all my sharp points are due some filing now after all that rock. I should put grip tape at the top of my tools, too, not just on the bottom half.

-Zeal Big Timber glasses helped a lot with visibility/contrast in the white-out fog, but seemed to fog up a lot while climbing. Not sure what to do about that.

-At our transition at the base of the climb, Jed had a large roll-top dry bag (not sure how many liters) to put his Aliens in while we were climbing. I was super lucky that it wasn’t snowing hard nor windy, so my boots ended up staying dry without a bag, but this is an important thing to remember for next time. When Colin and I were climbing the Supercanaleta this was also something he lamented not bringing for our running shoes (though we ended up not needing it anyhow because we bivied at Piedgra Negra—it’s important to keep your footwear dry, though, and when it’s wet, not have it making a mess in either your pack or the tent).

10 responses to “All Mixed Up with Jed”