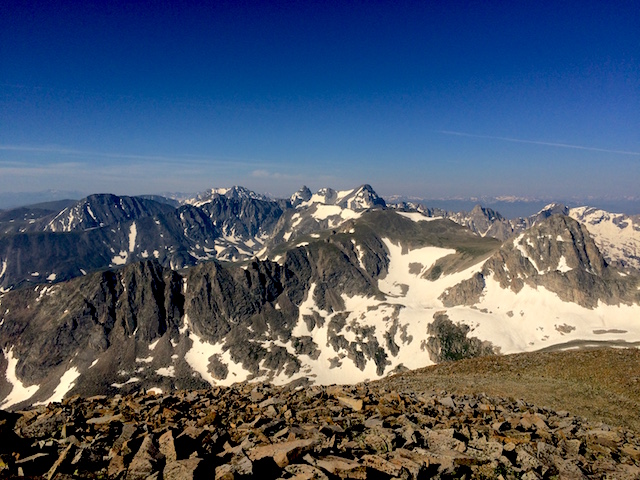 Looking south from Audubon. Lots of fun ahead.

I’ve been wanting to do this big link of the Indian Peaks for quite some time, and after scouting the unknown stuff last year, I figured it would make a good tester outing to see how my gradually-less-wonky knees would hold up on a longer outing.

The Indian Peaks are the southern extension of the geology that makes up most of the fantastic alpine climbing just to the north in Rocky Mountain National Park, and as such, the Continental Divide in this area is a pleasantly craggy, gendarmed, sawtooth of quality granite peaks. A long, obvious ridge at high altitude with reasonably solid rock, what else do you want? 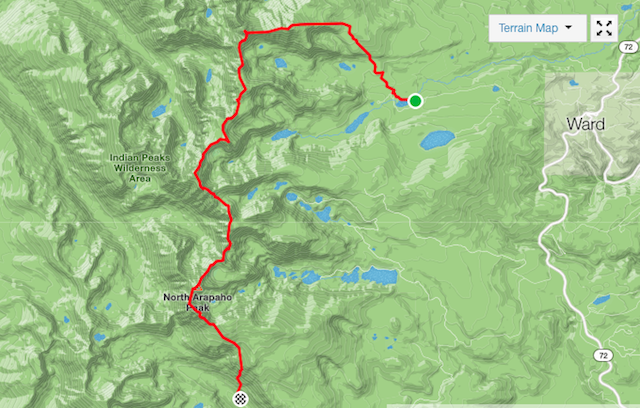 I still have quite little faith in my IT bands, so I decided not to push my luck with them and drove to Brainard Lake to embark on this adventure, even the last 2+ miles, which cost $10 to travel by car. I wasn’t sure my knees would go the distance on the Divide, so compounding the stress with some uphill biking seemed like a bad idea. I did, however, stash my bike in the trees before the fee kiosk so that when my buddy Kyle shuttled me back north to my start point, I could bike the two miles uphill then (presumably, my knees would’ve survived the run), and save him/me $10.

For some reason, the road is still closed for the last mile to the Mt. Audubon trailhead, so I had an extra 9min of bonus mileage to start my day before hitting the dirt and heading up Audubon. The big push up Audubon to 13,200′ went really well. I had a lot of energy and was moving quickly, hitting the summit in :53 from the trailhead, which I think might actually be a PR. I’ve never been on Audubon when it was completely windless, and this morning was no different, with a stiff breeze kicking up out of the west, reminding me to keep hustling. I was interested in a continuous effort today, so I stayed steady to the task other than the more-than-occasional pause to take a picture. The air was still a bit hazy—as it’s been recently—but it takes more than that to dull the magnificence of these peaks. What a place!

The traverse west over to Paiute—the first peak actually on the Divide—went well and I tagged its summit with lots of energy and excitement to get to the north ridge of Mt. Toll, definitely one of the scrambling highlights of this outing. 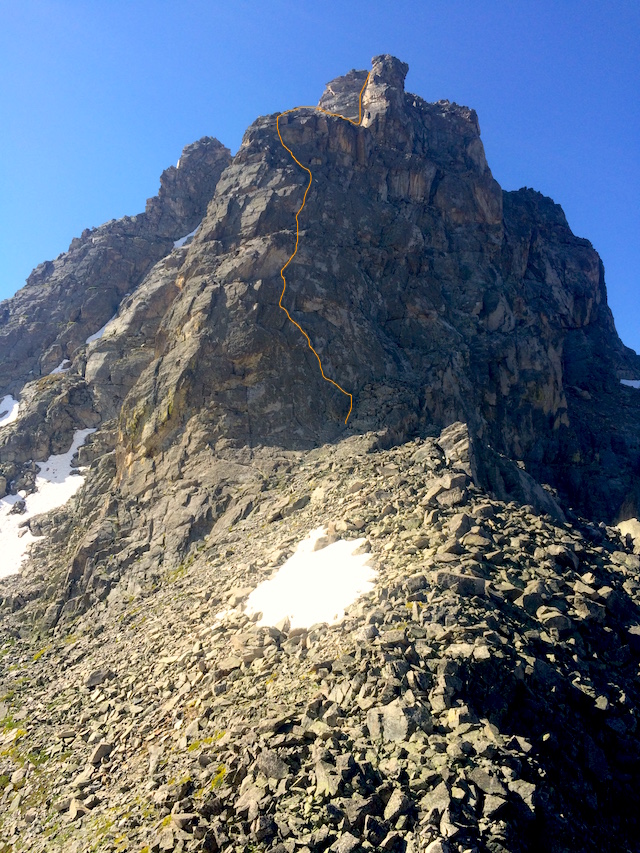 The North Ridge of Mt. Toll.

Looking down the crux section.

The pitches below the giant terrace were as pleasurable as usual—clean, featured granite, a steep crux but with positive holds—I love this route. On the terrace, though, I got a bit overzealous, and instead of taking the easy ramp around to the west for a short scramble to the summit, I selected a more direct line climber’s right of the usual gully/chimney (currently filled with snow) that provides an aesthetic extension to the lower pitches. It went fine, but the steep hands-to-fingers crack got my attention and I wasted probably 7min here making sure I was solid.

The next two peaks—Pawnee and Shoshoni—are the middle doldrums of this section of the Divide as they are little more than giant talus heaps, albeit with pleasingly distracting surroundings. The summit of Shoshoni provides a tantalizing appetizer of what’s to come, though, as the traverse through the Chessmen over to the summits of Apache and Navajo is laid out before you in all its splendor. I’d never been up there this early in the season with this much snow, and, dang, things were looking fine. 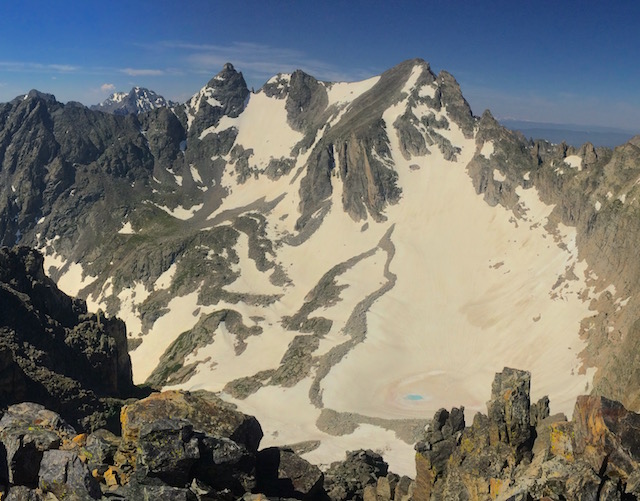 Isabelle Glacier, Apache, Navajo, and Arapaho (way in the distance). 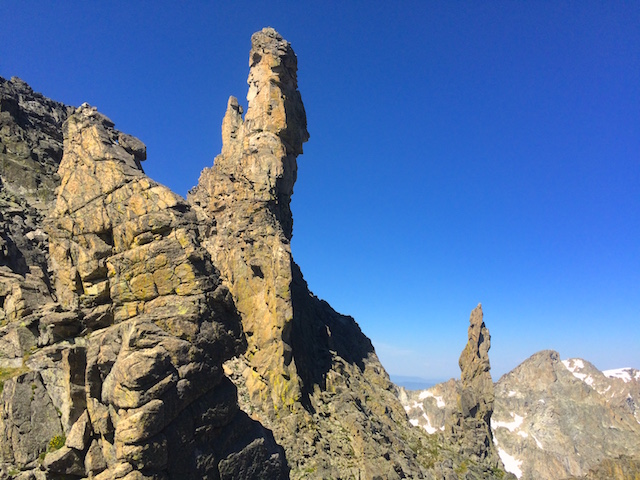 Some of the Chessmen, along the way.

The improbable route on 4th-Class ledges through this terrain went perfectly, and I even had good energy on the big scramble up Apache to its 13,441′ summit, the second-highest in the Indian Peaks (behind only 13,502′ N. Arapaho).

Typically, the bop over to Navajo isn’t a big deal, but today there was still a steep finger of snow stretching up beyond the saddle and because I was too lazy to re-ascend the maybe 50′ of vert to go around it, I ended up wasting a lot of time doing a steep, attention-grabbing downclimb into the couloir before kicking across the snow and enjoying the short scramble up Navajo.

Navajo was my mental half-way point for the day, as I usually descend northeast back down into the Isabelle Glacier basin to complete the loop from Brainard Lake, so I was excited to get there, but even more excited to continue south on the Divide to Arikaree and Arapaho.

The descent off Navajo was possibly the most annoying section of the whole traverse, with the footing consisting of that most awkward size of talus and scree that moves when you step on it but doesn’t move enough to be able to just plunge down it. Bumbly stuff. And I was starting to get a little bonky and dehydrated. Thankfully, I was able to hit a gel and drink all I wanted from some run-off, so the new-to-me scramble up Arikaree went well, with a pleasing and surprising sidewalk-in-the-sky north ridge.

Arikaree (left) and N. Arapaho as seen from Navajo.

The traverse from here to Deshawa is messy. I’ve only done it once before and did it by scrambling some ledges slightly to the east. Today that was a giant snow slope, so it was slow going, kicking steps with a rock in each hand and feeling like I was being baked in a solar reflector (which, I guess, I kinda was). I was excited to get back onto the ridge, though, as now I felt I was in the homestretch, with just a cruxy little tower and then the final grunt up to North Arapaho. After that, it’s all very familiar terrain and basically all downhill.

Kyle nearing the summit of N. Arapaho with Longs barely visible way to the north.

I’d coordinated with Kyle to shuttle me back to Brainard (thanks again!), so knew that he was going to be out on a run/scramble of his own on the ridge. We met up right at the handcrack tower (5h34 into my day) and continued on up and over the Arapahos and finally down the big descent to the 4th of July trailhead. Clouds were beginning to gather, so I was glad to be heading down, and doubly appreciative that A) my knees were totally keeping it together, and B) I finished feeling strong and ready for plenty more.

Overall, it was one of those days where everything just works and there was no major conflict or drama or really even much uncertainty, just lots of quality running and scrambling in one of the most inspiring places around. More to come, if things all work out…

8 responses to “Audubon to Arapaho”