8/4/2014
Mon – 1st & 2nd Flatirons (1:00, 1600′)
I had to get up to Twin Lakes for an NB photoshoot, so I just did another easy hiking/scrambling cruise from Chautauqua to baby my shin. After downclimbing off the First I decided to just downclimb the Freeway on the Second, too, to spice things up. This route is several hundred feet long but primarily 4th Class with an odd move of easy-5th here and there. Bumped into Joe and his fellow Arc’ mountain runner Amy Golumbia coming up the Freeway; gorgeous morning to be on the rock.

8/5/2014
Tue – nothing.
Spent the morning at the NB photoshoot in Twin Lakes. Easy excuse to take today off and give the shin one more day of rest.

As part of the photoshoot I had to give a little interview on camera and one of the prompts was about the “dark places” I might’ve visited during any of my five runnings of the Leadville 100. I delivered with some of the usual tripe about needing rescuing off the summit of Sugarloaf and an IV for hypoglycemia at mile 80, and walking down hills late in the race, and passing out at the finish a couple years later and hitting my chin on my truck’s tailgate, etc etc, but the truth is that I feel highly uncomfortable characterizing anything we do in the mountains as runners, racers, or climbers as visiting some sort of dark emotional space of physical pain and suffering.

Of course, we (I) do these things to have meaningful, altering experiences in an otherwise cushy world, but at the end of the day I’ve chosen to put myself in that position and I can generally choose relatively easily to take myself out of that position and it is a direct result of privilege that I am even able to make those choices. Forgetting that feels a bit melodramatic and like a pretty massive disservice to anyone who has or is experiencing true, involuntary emotional and physical pain and suffering, or life circumstances. Of which there are millions worldwide.

8/6/2014
Wed – Mt. Princeton (2:26, 5500′)
Up and down Grouse Canyon. Ah, so good to be back. The four days of leisure activity were good for the shin and there seemed to be minimal protest on this outing. Also, finally some glorious sunshine up in the Sawatch! The intense monsoon cycle of last week appears to have broken for now. Amazing how much more fun it is to scramble dry rock/talus instead of the perma-slick wet stuff.

8/7/2014
Thu – Mt. Yale (2:17, 5000′)
Up and down from the N. Cottonwood Creek TH, with Frosty. Anna wanted me to show her the somewhat tricky ascent up Yale from the north, and I wanted a running test of my shin (there’s a 1.5mi running approach and de-proach for this particular route), so Yale it was. We got a late-ish start (9:30am?) lingering over coffee, and as we approached the summit push a big grey cloud was gathering over Yale that ended up having a few unexpected flakes of snow in it. On the march up the tundra I’d thought to myself that while the sun was still powerful as ever, the breeze felt a bit chillier than usual—some of that autumnal crispness in the air. I love the change of seasons, but for some reason Fall always seems to catch me a little off-guard, despite it probably being my favorite/most-pleasant season of the whole year.

8/8/2014
Fri – Mt. Princeton (2:29, 5500′)
Up and down Grouse Canyon. Nothing too notable except that I rolled my right ankle (same as before Lavaredo back in June) pretty good descending the tundra right before treeline. Ugh. Not horrendous, but never a joy.

Last night I read this quite nice climbing essay that made me re-wonder why it is I often find so much climbing writing more compelling than running writing. The story there is pretty simple and on the surface not terribly interesting. Carter presents his experience humbly—not heroic, not death-defying—just personally meaningful in a very deep way, and he connects it nicely to the other humans and non-climbing activities that surrounded the link-up itself. Good writing. No pretension. I was inspired. To try to climb better and write better.

8/9/2014
Sat – Mt. Elbert (2:33, 5500′)
Up and down Black Cloud. This is such a great route on this mountain. The NE and SE ridges have a constant train of hikers on a Saturday morning, but I only saw two parties on this line, even though there’s a wonderful trail basically the entire way. It is ~1mi longer than the other routes and you start from a lower elevation (9700′), so this is really no great surprise. The great surprise for me, however, was that my shin was very cooperative. I ended up running every step of the first 40min or so, whereafter the trail switchbacks aggressively above treeline, but then there’s a lot more running still as you run the rolling ridge all the way to the summit of Elbert. Positive progress for sure, let’s just hope I can consolidate the gains.

I don’t currently possess the discipline or organizational skills to execute such a massive undertaking, but I’m still convinced that Elbert provides one of the more apt stages for a legit SkyUltra in the States, because it’s not in Wilderness and it has the cachet of being the state’s (and Rockies’) highest peak. My dream course would start and end in Twin Lakes and ascend the mountain by three different routes: run up the SE ridge, down the NE Ridge, up the West Ridge (this off-trail route would likely never get permitted), down Bull Hill/Echo Canyon, two loathsome miles on the highway (unless some route could be established through the trees), and then finish with a climb up Black Cloud and descent back down the SE Ridge to Twin Lakes. It’d be crazy. A 55K with ~15,500′ vert that would likely take the winner ~7h30! The course is even kinda shaped like a pair of lungs! Or, something else…

8/10/2014
Sun – Mt. Princeton (2:28, 5500′)
Up and down Grouse Canyon. An unremarkable go on what has become a bit of a default climb for me. The notable bit was that I’ve now detected nary a whisper of complaint from my shin since Monday…seems like progress for sure, and my imminent plans for Europe are seeming a whole lot more likely again. 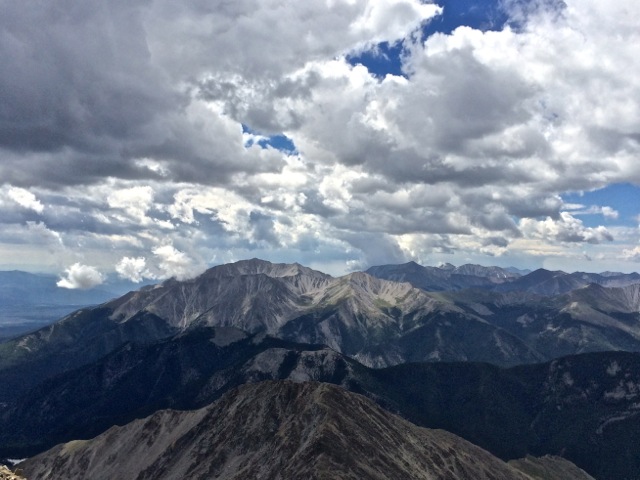 Princeton, Antero, and Tab/Shav all visible looking south from the summit of Yale. Oih.

Frosty topping out Yale. Not even posed. Seriously. 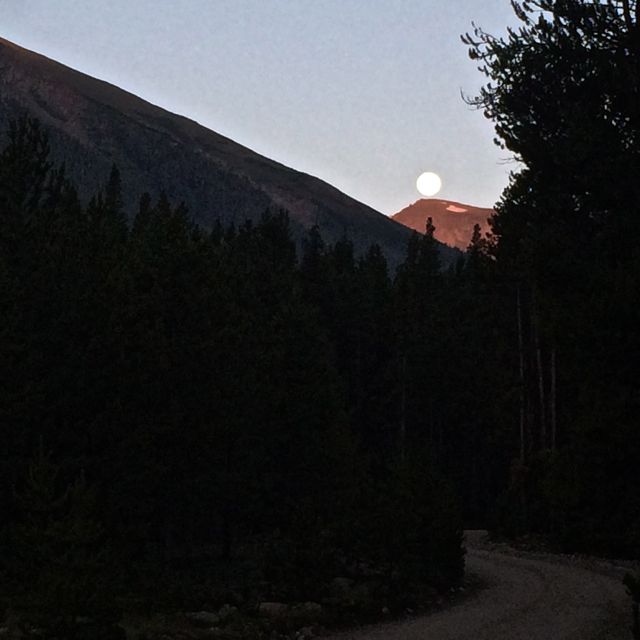 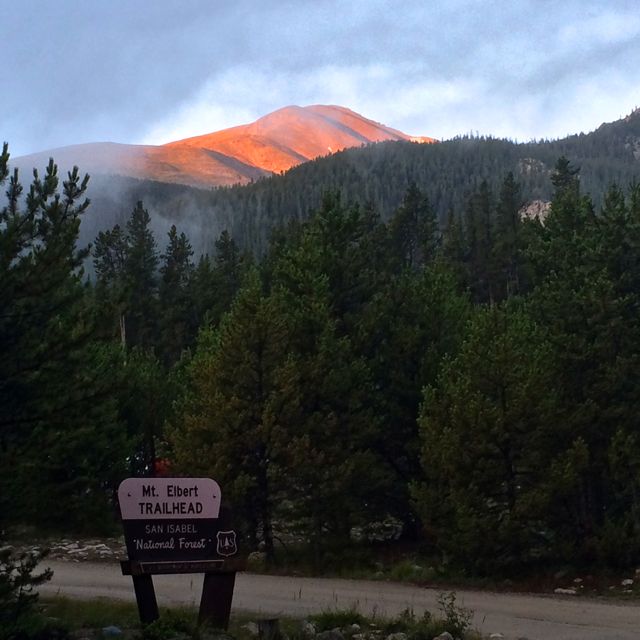