10/1/2014
Wed – Green Mt (1:39, 3000′)
After spending most of the day traveling back from Boston, it was great to get out in the evening for a lap on the hill. A big rainstorm blew through right before I ran, so scrambling was out and I enjoyed a nice, steep ascent up the 3rd access route. A giant cloud enveloped the summit just as I arrived, creating quite the magical atmosphere, and I had the good fortune to bump into Jeff V for some company on the descent. Immediately afterwards, I met up with Joe at the climbing gym for our first session of the season.

10/2/2014
Thu – 1st Flatiron+Green Mt. (1:38, 3000′)
Perfect morning on the hill. I felt a little rusty in my scrambling, but I particularly enjoyed the crisp, early morning temps—the last time I did any running in Boulder it was full-on hot, sticky summer. More climbing gym action in the evening with Joe.

10/3/2014
Fri – 1st Flatiron+Green Mt. (1:41, 3000′)
A reprisal of yesterday’s outing. Climbed through a cloud on the First Flatiron, which rendered the rock unexpectedly slippery near the summit. Combined with the still-cool temps, Joe and I scrapped our plans for climbing outside (wimps, I know) and instead hit the gym for the third day in a row. As such, I was pretty worthless; simply too fatigued and sore in the fingers and forearms.

10/4/2014
Sat – Odd Flatiron Trifecta+Royal Arch (2:08, 4000′)
Still feeling the effects of jet lag, I got out early before meeting Joe for some climbing in Boulder Canyon. After running up to Chat I felt unexpectedly on-point on the rock and ended up enjoying a fantastic morning on the 1st, 3rd, and 5th Flatirons. After the Fifth, I descended to the Royal Arch, climbed its West Ridge, and then downclimbed its east face before continuing on down to the Mesa Trail and back to town.
Because of our non-desire to take lead falls on trad gear, Joe and I basically never climb near our limits outside. This meant that today’s session on the Dome and the Elephant Buttresses was a nice break for our fingers and forearms and a nice re-familiarization with rope management, gear placement, and fall weather enjoyment. On the final route of the day, though, we did manage to get a small cam stuck—a first for us—which was a bit of a bummer considering the price tag. Both Joe and I have scored booty cams in the past, though, so, you know, win some, lose some.

10/5/2014
Sun – Longs Peak (3:28, 5000′)
Despite my accumulating fatigue due to returning to training and lack-of-sleep-from-jet-lag, I couldn’t resist the great weather and snagged a shoulder-season summit of Longs. I comfortably stayed in shorts until the Boulder Field, but then donned tights, a jacket, and crampons for the north face where I found what felt like full-on winter conditions . The Cables dihedral was the iciest I’ve ever seen it and I was grateful that I’d anticipated this by bringing a more technical hybrid tool (Petzl Sum’tec) instead of a lighter, straight snow axe. I don’t think I would’ve made it up otherwise and was even wishing I had a second axe. I was definitely happy for the rap cord on the descent, too. As is usual, after two months away from the high altitude I was pretty punted by the thin air and was worthless the rest of the day, nursing an altitude headache.

10/6/2014
Mon-AM: 1st Flatiron+Green Mt. (2:05, 3000′)
After the scramble and ascent to the summit I descended the Red Lion Rd down to Boulder Canyon for a little extra mileage and time-on-feet.
PM: The Regency+Royal Arch+Fifth Flatiron (1:34, 2000′)
Given this morning’s tired legs, I had no plans of getting out this afternoon, but Joe cajoled me into a little scrambling. We parked just down off Broadway and approached via Skunk Canyon before making this nice, logical link-up. The Regency and the East Face-South Side route on the Fifth were both new for me (the whole outing was new scrambling for Joe), and the EFSS route on the Fifth had both Joe and I shaking our heads that it is one of Gerry Roach’s 53 Flatiron designated Classics. Sure, it makes a great, direct link-up from the Royal Arch, but the quality of the line itself is a little suspect. After downclimbing off the Fifth, we descended by climbing back up and over the Royal Arch and trotted back down Skunk Canyon before heading to the gym for a quick hour on the plastic. Both of us were climbing much more strongly after giving our arms a couple days of recovery.

10/7/2014
Tue – 1st Flatiron+Green Mt. (1:45, 3000′)
Oih, proper tired this morning. A real slog getting up and down the hill. Afterwards, Joe and I went to Eldorado Canyon with the intention of climbing Rewritten on the Redgarden Wall, a favorite of ours, and one that we knew would be easy for us, making a nice re-introduction to the funky climbing in Eldo. Of course, being the classic that it is, it was busy. We didn’t realize just how busy, however, until Joe, having linked the first two pitches, ran into a party of three on the Red Ledge. With another party coming up behind us, and neither of us feeling particularly energetic or bold, we decided to just traverse the ledge a couple hundred feet over and climb the moderate but still very aesthetic Swanson’s Arete. This went fine, but we were reminded of just how tedious multi-pitch rappelling is, and how it seems nearly every trip down to Eldo ends up turning into some kind of ordeal that takes waaaay longer than planned.

10/8/2014
Wed – Arapaho Peaks (2:18, 3500′)
I met Joe and Fred up in Gold Hill at the ungodly hour of 4:30am; the early wake-up was at least partly mitigated by getting to see the brilliantly eclipsing blood moon. An hour later we were marching straight uphill out of the 4th of July trailhead by headlamp, hoping to catch the sunrise up on the 12,500′ ridge above us. Eventually, we made it over to the Arapaho Peaks themselves, where Fred grabbed some snaps of Joe and I on the traverse for Buff USA. It’s nice working with photographers like Fred whose fitness and mountain experience let you mix a worthy morning in the mountains with a photoshoot. After the last two months away, it was really nice to get back up in the high country again before the snow really starts flying.

10/9/2014
Thu-AM: 1st & 3rd Flatirons (1:07, 2500′)
I knew the forecast called for some precip to blow in this afternoon, so I switched things around and got up on the slabs this morning, leaving the up-tempo creek pathing for this evening. I felt pleasantly on-point for both scrambles/downclimbs; kinda nice to do a shorter, shake-out type effort first thing in the morning.
PM: South Boulder Creek Path Loop+barefoot (20mi, 2:06, 700′)
The rain came in as predicted this afternoon, but for a while I thought I would be able to sneak in this run in between downpours. Oh how wrong I was. Things were great for the first 8mi or so—a little too much coffee seemed to preclude my usual need for a warm-up and I was almost immediately cruising along at ~6:10 pace—but then it started raining. Hard. I was still able to maintain this pace through about 15mi or so, but then it seemed like the sky cranked things up to a truly biblical intensity and I gave up trying to run hard, dropping from 6-flats to ~6:40s or so for the last 5mi; all the while I wouldn’t have been entirely surprised to see Noah and his ark come slaloming down Boulder Creek. It was raining hard. Even without the rain I probably would’ve had a tough time maintaining things the last couple miles, but even so, this run was a good fitness check for extended, up-tempo running. I’m further along than I thought I would be at this point.

10/10/2014
Fri – Green Mt. (2:05, 3200′)
The remnants of yesterday’s meteorological theatrics still hung in the air and on the peaks this morning, so I took a rare day off from scrambling and did a simple run up to Green’s summit via the Third Flatiron access route before descending down Bear Canyon. I hadn’t been in this drainage since sometime in June, and it was a glorious run through the mist, low clouds, and brilliant red sumac. My legs were suitably exhausted after yesterday’s efforts, so I just trotted along, enjoying it all.

10/11/2014
Sat – 1st Flatiron+Jaws+Green Mt. (2:20, 3500′)
Another glorious fall morning. On top of the First Flatiron I was sufficiently inspired by the toothy profile of Jaws to actually go over and scramble it for once. After downclimbing the backside of the First, it was an easy 4min trot over to the base of the formation, and then a pleasant if mostly moderate and lichen-y scramble to the summit behind the Third Flatiron. Though this arete looks inviting and extremely impressive from afar, in reality, almost every tooth offers an opportunity to walk-off, which doesn’t lend much of a feeling of commitment or inspiring position. Even so, it was a nice exploratory outing for my still-tired legs, and after marching to the summit of the mountain I did the cruise-y Red Lion Rd descent back to town.

10/12/2014
Sun – 1st Flatiron+Green+Stairway to Heaven+Royal Arch (2:49, 4200′)
I had vague intentions of maybe doing a long run this morning, but within a couple of blocks I could tell that my legs didn’t have it. Sometimes energy levels and motivation are hard to predict. My scramble up the First was desultory, slow, and labored. On the slog to the summit of Green the clouds rolled in and it even started sprinkling a little, which was actually nice as it fit my mood a little better. I motivated to at least run down Bear Canyon for a little extra mileage/scenery, and somewhere in here things finally clicked a little, so on the run back over on the Mesa I spontaneously headed up Skunk Canyon for a little scrambling. I’d only done the top-10 Classic Stairway to Heaven once before, so I headed up this 1000′ ridge, particularly savoring the Like Heaven summit. At the top, I made the bushwhack/traverse over to the Royal Arch and did a quick up/down of its West Ridge—mostly to just practice its steep downclimb—before running back down to town feeling pretty pleased to have salvaged an originally uninspired morning with some fun scrambling and summit-sitting. 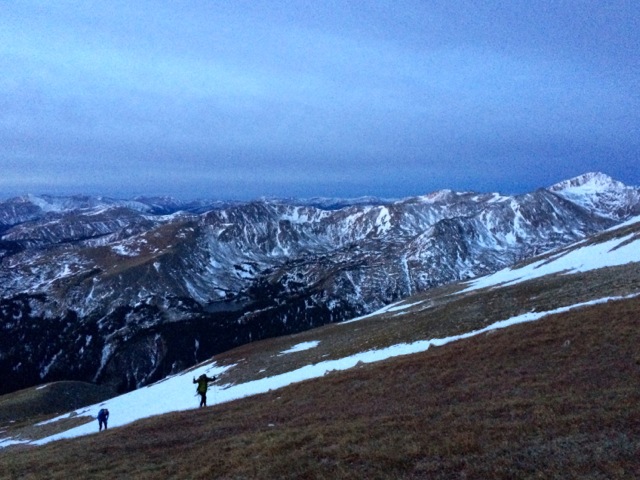 Waiting for the sun with Joe and Fred in the Indian Peaks. 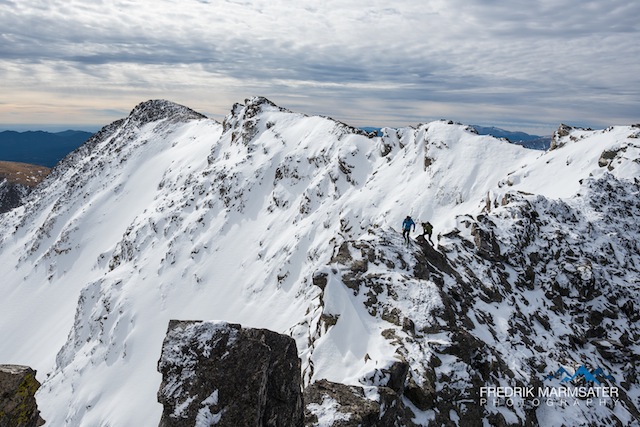 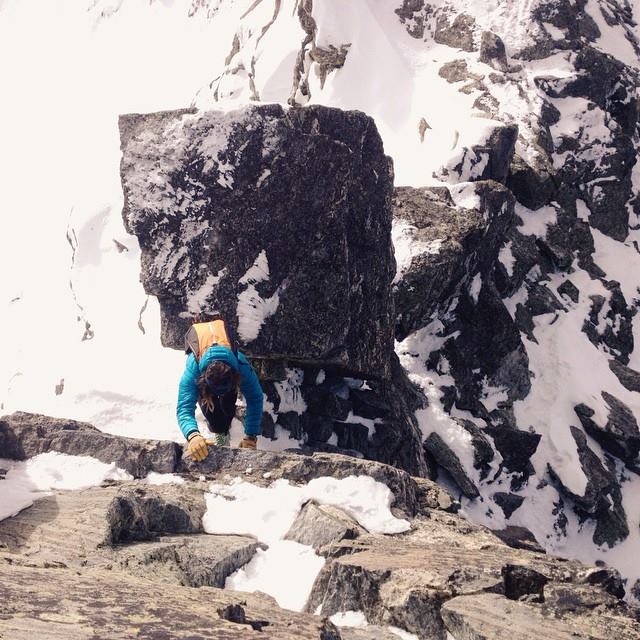 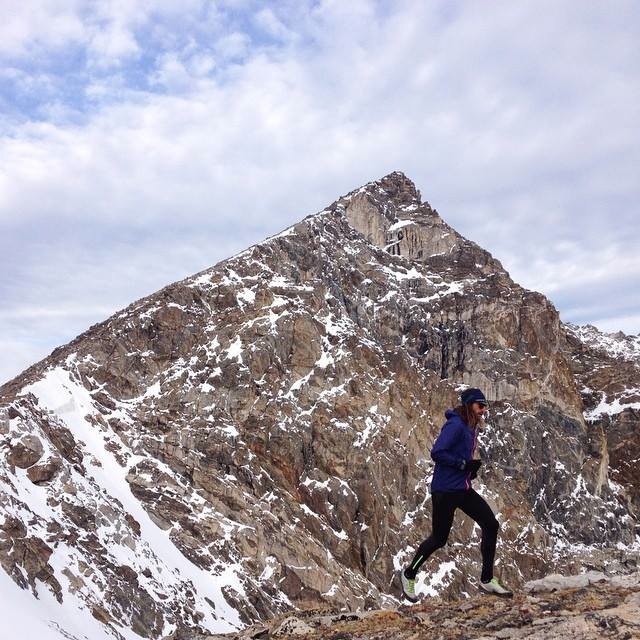