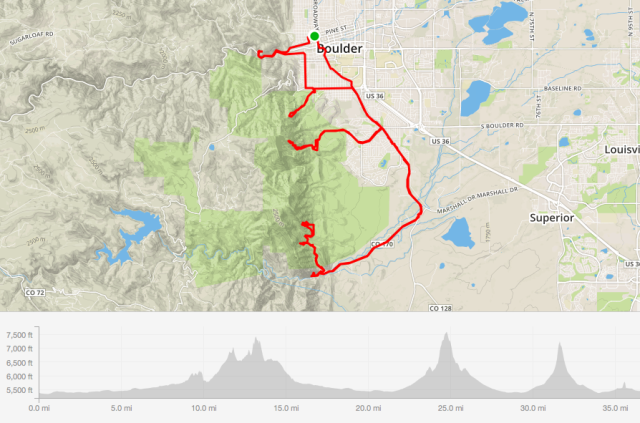 Last Sunday was my 32nd birthday; I marked it with a combination of the two activities I’ve been practicing most consistently this summer—biking and climbing. Earlier this summer, my friend and climbing partner Bill had linked the Wind Tower, the First Flatiron, the Monkey Traverse, and East Slab by bicycle. His thinking had been to climb something in Eldo, the Flatirons, Flagstaff Mt and Boulder Canyon—Boulder’s four major climbing areas.

I, however, don’t care much for bouldering (or, really, ever do it), and have a really hard time picking a favorite Flatiron, so I jettisoned the Monkey Traverse on Flagstaff in favor of scrambling something in each of the Southern, Central, and Northern Flatiron areas (as defined by Mountainproject.com).

As such, I settled on Wind Ridge on Eldo’s Wind Tower, the Matron in the Southern Flatirons, Satan’s Slab in the Central Flatirons, the First Flatiron in the Northern Flatirons, and East Slab on the Dome in Boulder Canyon (Strava posting).

The adventure element in all of this was that I’d never soloed Wind Ridge, the Matron, or East Slab (though I had climbed each several times previously).

I knew that the heat and direct sun would likely be the crux of the day, so I got an early start, rolling away from my front door by 5:30am. I had my Trek Madone outfitted with a half-frame bag for my climbing shoes and chalk bag and I had my approach shoes strapped to my seatpost. My full-carbon Madone is decidedly a race bike, so this was a bit unorthodox, but all of my biking would be on roads for the day, and, well, the Madone just feels sublime when biking a road. Pick the best tool for the job. 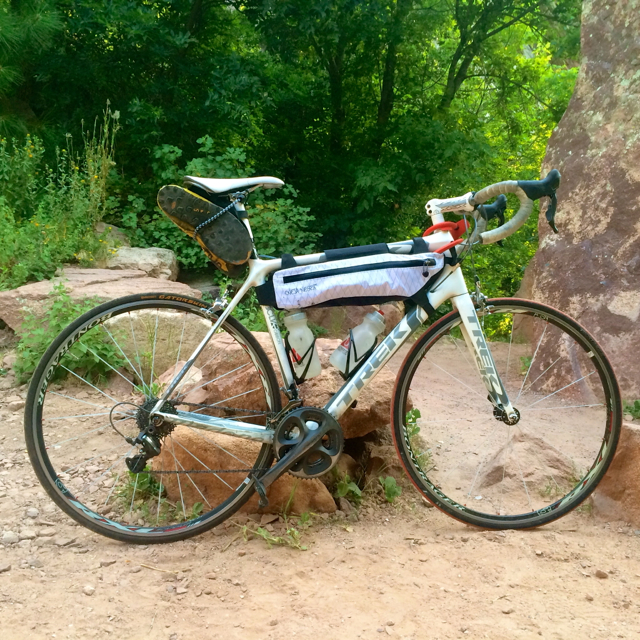 The nine miles from my apartment to the Eldo bridge passed quickly in the cool morning air, and after locking my bike to a tree I kicked off my bike shoes and did the short approach to the base of Wind Ridge barefoot before pulling on my climbing shoes. I’d followed this route once and led it twice, paring my rack down to only four pieces for the 3-pitch, ~300′ route.

Wind Ridge starts at the treed ledge and heads up the central arete, just right of the giant left-facing corner.

The start of this route has three variations. The traditional start is a short 5.6 zig-zag to avoid a steep flake and get on to the arete. I’d never done this one. Bill likes to traverse straight onto the arete below the flake. I’d tried this twice and it felt precarious and balancey both times. The last time I’d climbed the route I’d done the direct start—a few moves of wide stemming and jamming of a flake to a big jug at the top. This allegedly has the hardest grade at 5.7+/8-, but it felt very secure when I did it on lead, so that was the start I chose for the solo. The rest of the route goes at 5.6.

This climb went great. The start felt almost trivial and I found the two other tricky spots on the route were very securely surpassed by a key crimp and bomber hand-jams, respectively. Near the top of the second pitch, what appeared to be a virtually brand-new #0.4 Camalot was hopelessly overcammed; I stopped for a few moments to try for the booty retrieval, but alas, no birthday present for me.

Near the top of the 2nd pitch on Wind Ridge with the creek bridge far below.

The final pitch of Wind Ridge is a steep, funky bucket-flake thing that I used to struggle with because I would wedge myself in behind it backwards (facing out). Armed with Bill’s beta to simply do a pull-up on it and then quickly swivel one’s hips behind it, it was a cinch. It took me a couple extra moments to find the key crimps out right to pull over the crux bulge, and then it was an easy romp to the summit of the tower.

After downclimbing and hiking back down the trail I was so psyched (and feeling warmed-up) that I wanted to hit another lap on the route, but I had plenty more climbing ahead of me, so I resisted and moved on, clipping into my bike pedals just as the day’s first climbing parties started arriving, coffee in hand.

My intervening bike ride was a full minute or so, just over to the base of the Old Mesa hiking trail. I re-locked my bike here and started marching up the overgrown path with my chalk bag and climbing shoes around my waist, headed for the freshly re-opened Matron (it’s closed for climbing for six months out of the year, due to raptor nesting). 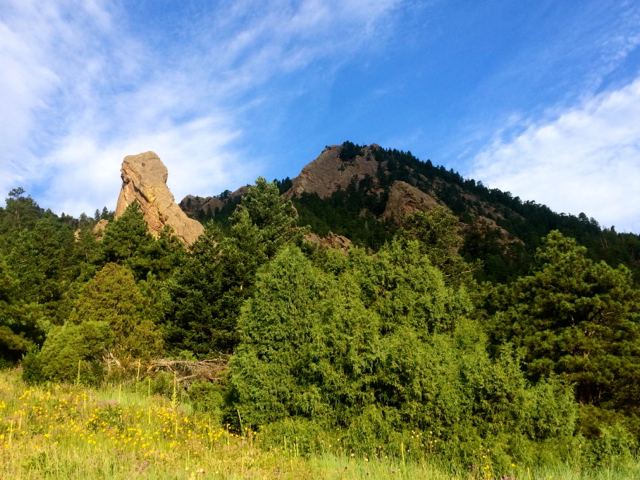 The Matron and South Boulder Peak from the Old Mesa approach.

I’ve tried scrambling onto the Matron’s East Ridge before—with no success—but armed with Bill’s suggestion to go around the corner to the left on steep jugs and with my new perspective after a full summer of climbing, I was optimistic about my chances. After this initial pitch to gain the east face/ridge, the rest of the route is your standard Flatiron slabineering of the low-5th Class variety, though I think much of the Matron is a few degrees steeper than your average flatiron.

I felt very solid on most of the first pitch, pulling the first bulge with ease (I know about the hidden jug) and then doing the exposed traverse on pin scars and horns. However, I just couldn’t commit to either Bill’s jugs or my usual precarious mantle out and up to the right. Mostly because I was unconvinced of my ability to downclimb either option, and I was without a rope. After far too much time chalking and re-chalking my hands and deliberating in the now-blazing sunshine, I finally gave up and downclimbed.

Since I was already up there, I hiked a ways up the hill to see how the North Face crack system felt. I figured out the key beta on the first crux (by the bomber fixed pin), and then climbed all the way up to the steep roof/flake crux, but again, I wasn’t confident in my ability to reverse such a steep/overhanging move, so I carefully climbed all the way back down, which was good practice at least. I’ll have to go back and check this stuff out again with a rope and a couple cams.

Not wanting to abandon my original plan of scrambling a formation in each region of the Flatirons, I stashed my climbing shoes and chalk bag on the Mesa Trail and reluctantly started on the hump over to the Fatiron. This is a justifiably large, proud formation, but just doesn’t have the panache and striking profile of the Matron.

After accidentally bumbling onto the Crackiron, I found the base of the Fatiron and uneventfully scrambled it, downclimbing between its two pieces and off the summit itself. The way I scramble this (to the left of the crack/water chute on the lower piece) is allegedly 5.6 (I’ve never found the supposedly easier terrain to the right), so I was able to maintain my hope of keeping each climb for the day at 5.6 or greater difficulty. 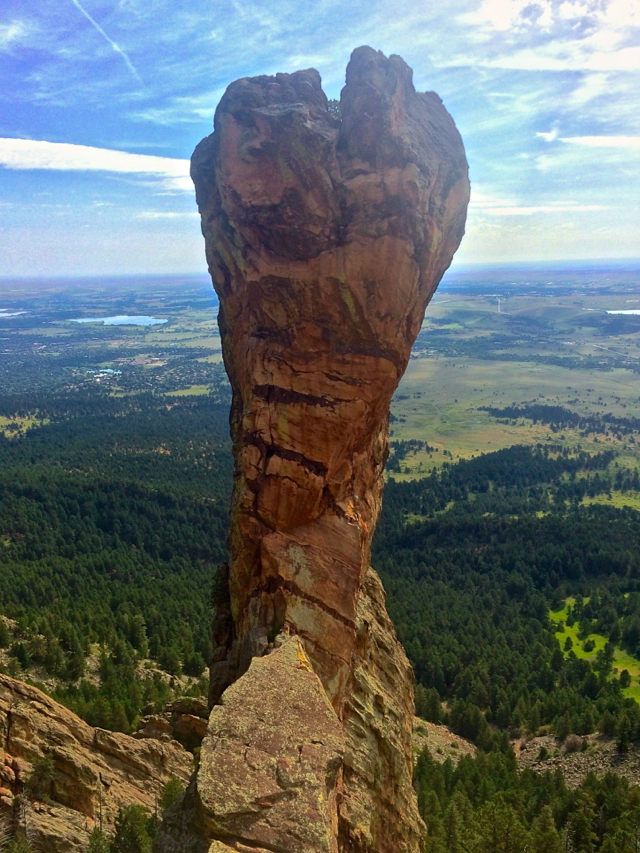 The fierce West Face and West Ridge of the Maiden.

The best descent from the Fatiron is the southside descent from the Maiden, so as I headed toward this I couldn’t resist a quick out-and-back to the Crow’s Nest on its exposed and knife-like west ridge (5.4). 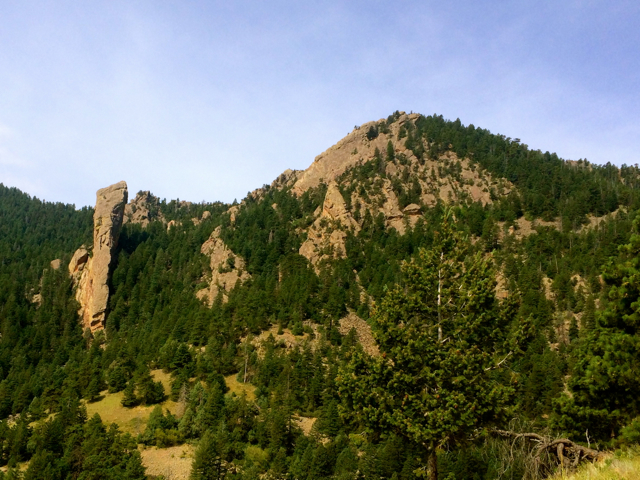 A different perspective on the Matron and SoBo Peak, from the northeast.

On the hike back down the Old Mesa to my bike I was definitely starting to feel parched, so once there I chugged both my bottles of water, changed shoes and started pedaling for NCAR and Satan’s Slab (I stopped at the Eldo Market Corner Store to refill my bottles).

With all the water in my stomach, I actually felt really good—though hot—on the NCAR road climb, and locked my bike at the start of the service road for the water tank. I was done with my climbing shoes until I got to the Dome, so this was a light and fast approach into Skunk Canyon.

Satan’s Slab is prominent on the left (it’s split by gullies into four distinct pieces). The Fist is the highest point in the photo.

Satan’s is a gigantic and imposing slab, and the Mountain Project description calls the first few pitches the “slabmongerer’s final exam” as it ascends a thin, mossy-but-dry water chute with almost no protection (not that I’d be placing any, obviously). However, I’ve climbed this exquisite chunk of stone literally dozens of times, so had no worries and it went well despite full sun exposure.

Simply because I really enjoy the summit handcrack, and because it links so well/obviously with Satan’s, I also tacked on the Fist/Hippo Head. And then, because I had to descend somehow—and because it also links so obviously—I downscrambled Angel’s Way back down into the canyon. Man, I love Skunk Canyon; such quality scrambling on the ridges in there. 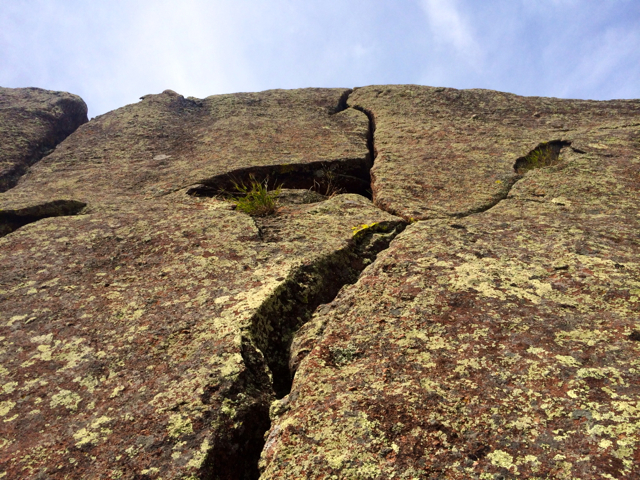 The all-too-short 5.6 handcrack on the Fist/Hippo Head.

Once I was back at my bike the trip over to Chautauqua for the First Flatiron was surprisingly quick (12min), but I made sure to chug two more bottles of water once I got there.

I’ve done the First Flatiron so many times (265 actually), that there wasn’t really much to mark this one, despite it being hot. On the hike back down to Chautauqua I gave Joe a quick call to let him know I’d be a little late for our meeting/interview with Kensuke, Taku, and the other visiting Japanese scramblers that afternoon, but then it was just another quick bike ride up the creek path to The Dome in Boulder Canyon for the last route of the day.

The Dome in Boulder Canyon.

I’d never soloed the East Slab before. Despite its steep start (great jugs and hand jams), I always thought the psychological crux would be the step out of the crack on the upper slab and smearing onto the face before gaining a small transversal ledge system. However, in my previous climbing I had discovered a truly hidden jug that makes this a very solid if somewhat athletic-feeling move (seriously, I think I even throw in a heel hook).

I again did the short approach barefoot, simply removing my cycling shoes. On the route itself, I was sweating copiously in the afternoon heat and had to repeatedly chalk both my palms and the backs of my hands in order to make the handjams feel secure, but it was a fantastic tag to the end of the link-up.

Overall, I had a blast and can’t wait to start doing more stuff like this—self-powered link-ups of climbs and peaks—and do it even more efficiently once my shin is back to full health.