I’ve been wanting to make a trip into the Cirque of the Towers in the Wind River Range for a few years now; it contains two of the vaunted 50 Classic Climbs of North America (East Ridge of Wolf’s Head and the Northeast Face on Pingora Peak) and all photos I’d seen of it evidenced the usual Wind River majesty.

The Cirque is pretty remote. Just getting to the Big Sandy TH access point requires 35-40mi of driving on dirt road, and then it’s a 9-10mi run into the basin, which is on the far side of Jackass Pass. As such, I was surprised to see a nearly-full trailhead parking lot on a late-in-the-season week night.

An early season snowstorm last week had shut down my plans for some alpine scrambling up in the Tetons, and a couple bike rides around Dubois in the previous days had confirmed that snow was lingering above 9000′, so I had low expectations for getting to do any scrambling in the Cirque. Still, I was looking forward to at least getting to run in a new (to me) beautiful area, and I packed my rock shoes and chalk bag in my running vest just in case there happened to be some dry rock.

I’ll let some photos tell the rest of the story of my last day of summer. 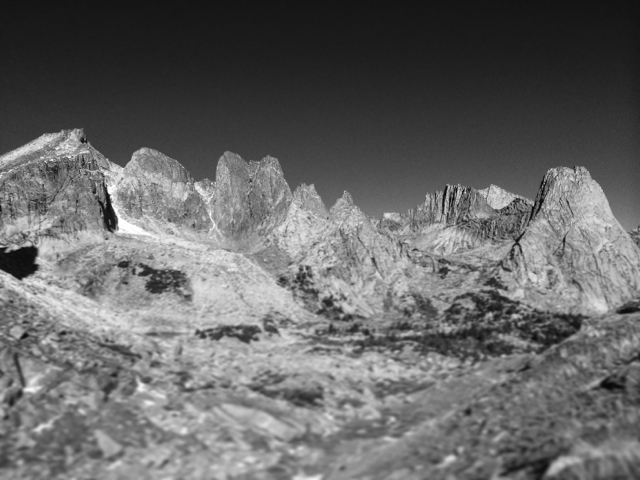 This is the view that greets you when you pop over Jackass Pass and get your first real view into the basin. Pretty unreal. Pingora Peak is on the far right, followed by Tiger Tower, Wolfs Head, Overhanging Tower, Sharks Tooth, Block Tower, The Watchtower, Warrior I & II, etc, etc. It’s an impressive place. 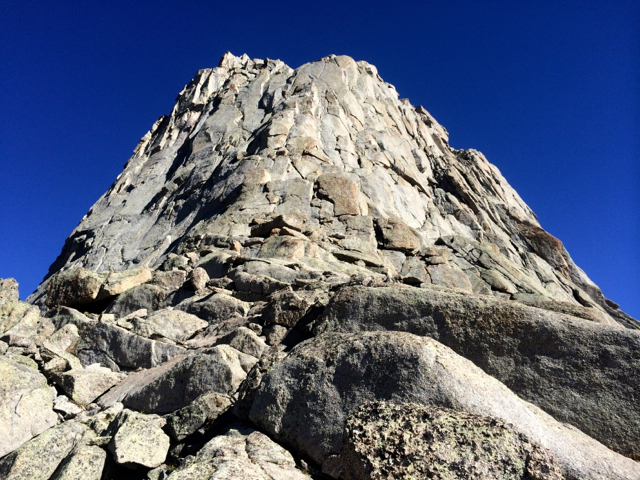 After running across the basin on a climber’s trail, it’s a 3rd/4th Class scramble up grassy ledges to the shoulder of Pingora at the base of the South Buttress. The obvious K-Cracks are at the top center of the peak with the right-facing dihedral below that providing the excellent two pitches leading to a giant ledge at their base.

Where the real climbing starts. I climbed the crack/corner to the left and then got into the right-facing double-crack dihedral above there. This pitch was fantastic. Super solid rock, perfect holds, fun movements stemming and liebacking. Really ideal scrambling on alpine granite in an amazing setting. The K-Cracks are out of sight above this pitch.

Looking up at the K-Cracks from the ledge at their base. The standard route (and the one I took) is the left-most crack system. Guidebooks rate this beautiful pitch a consensus 5.8, but that felt a bit soft to me. Maybe that’s just because the fingerlocks are uniformly super high quality and there’s sufficient feet the whole way. 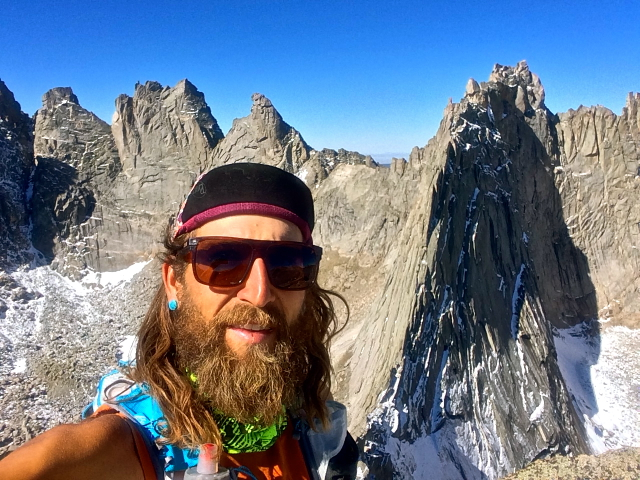 This is the view from the summit of Pingora. The East Ridge of Wolf’s Head erupts just over my left shoulder, followed by Overhanging Tower, etc just behind me. 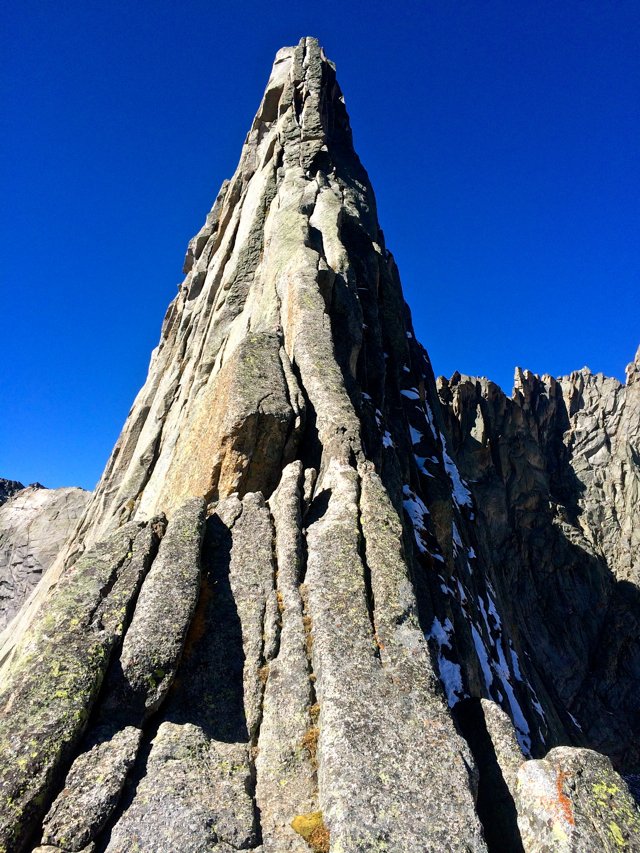 The downclimb from the top of Pingora was involved. I was onsighting the (supposedly 5.2) East Ledges route from above, but I don’t think I ever found the 5.2 line. After making it down, I traversed over to the Tiger Tower-Pingora Col and then along the base of TT to the bottom of Wolf’s Head’s East Ridge. What an amazing feature! 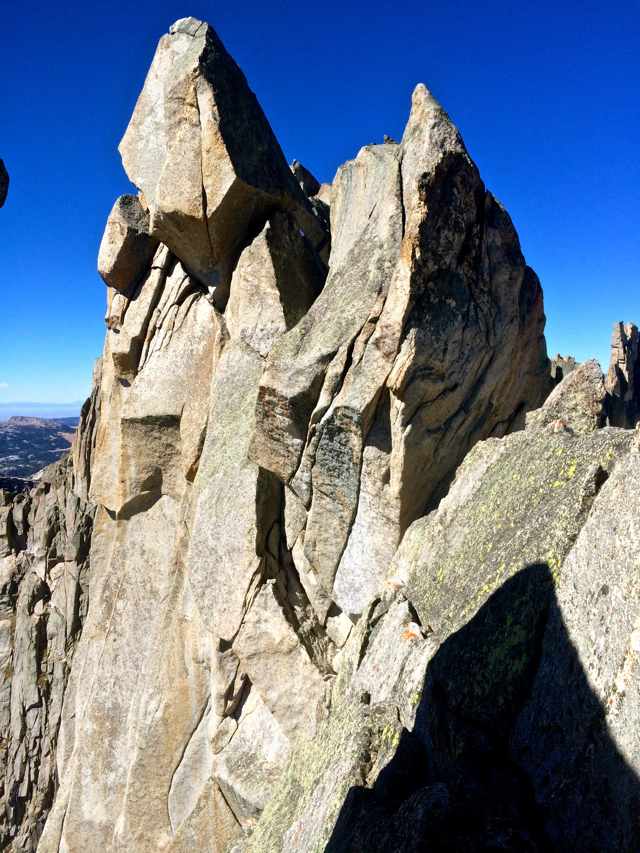 Looking at back at the first two towers on Wolf’s Head’s ridge. The first tower was easily passed on this (south) side by a short hand-traverse around a boulder. From there one would normally squeeze through a chimney to the north side of the rock to a roomy ledge and then a piton-protected face traverse. Everything on the north side was covered in snow and ice. Not gonna happen. The alternative was traversing beneath this diamond-shaped face on the south side, high on the ledge tucked just above all those short, parallel cracks. The crux was pulling over a small bulge/roof on handjams (deep in shadow here). I waited for a while as a party of three in front of me made the moves, but after they’d cleared out I decided to at least go have a look but wasn’t willing to commit to the final move unroped with 1000′ of air under my heels. The move itself wasn’t that hard, but I knew I wouldn’t be able to reverse it and I also knew that the route would subsequently deviate onto the north side a few more times (where I would encounter snow and ice again), so I humbly downclimbed. No worries, I still got to experience some of the more beautiful pitches of scrambling I’ve done. And in reverse, too!

The snowy/icy ledge/face that is the typical route around the second tower. 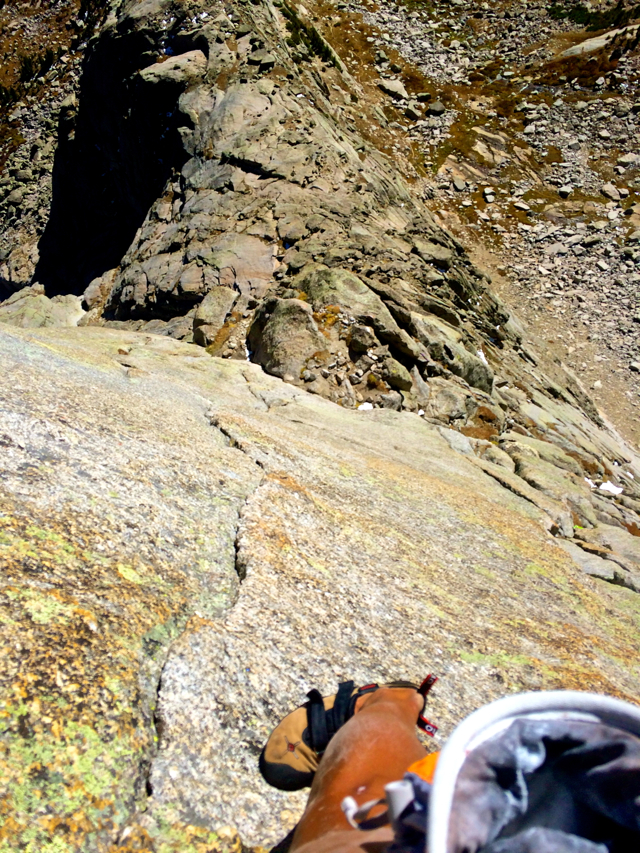 After I’d downclimbed the initial pitches of Wolf’s Head, I still had lots of energy and it was still early in the afternoon, so I decided to console myself with another lap on the beautiful South Buttress of Pingora before running the 10mi back out to the trailhead. Here I am at the top of the K-Cracks pitch, looking down the incredibly clean crux pitch. Just look at that finger crack! So much fun!

From my final time on the summit of Pingora, looking south back across the basin to Jackass Pass (lower left) and the north faces of Warrior II, Warrior I, and Warbonnet.

19 responses to “Cirque of the Towers”

Leave a Reply to ko