I have a couple of Flatiron objectives this fall—the Tour de Flatirons where friends gather five weeks in a row to time trial a classic Flatiron formation in car-to-car fashion, and a (hopefully, optimistically) single-push link-up of Gerry Roach’s 53 designated “classic” Flatiron routes. Yesterday morning I biked up to Chautauqua to work on progressing towards both of these goals.

Proper day on the hill.

The cloudy skies—always threatening rain—provided ideal summertime conditions on the Flatirons. With their exposed, eastern faces, most Flatiron routes are typically brutalized by the rising morning sun, making dehydration immediate. Yesterday wasn’t so bad, though after a few hours on the go without liquids in +80F temps, you’re still gonna get parched.

First up was the First Flatiron. It seems like it’s been taking a while for my Flatiron fitness to develop this summer, but today I finally saw glimmers of hope. A 12:25 approach to the base of the First was followed by a 12:18 scramble and 1:47 downclimb. I’ll definitely be a couple minutes faster in a few more weeks, but I was psyched about that effort on the day’s warm-up route, considering most of my scrambles of this rock have been languishing in the 14-15min range lately.

From there I carried my momentum down across the boulderfield and over to the East Bench of the Third (32:55 from Chautauqua) where I put in a 7:50 scramble followed by a 4:43 downclimb (this has got to be right around one of my quickest scramble/downclimb combos for this formation). I felt that was enough pace-pushing for the morning—next up was a linking of a few of the Roach Classics.

The Third’s SW Chimney deposits one right at the base of Winky Woo, so I hit that next. This route up the SW face of the Third has got to be about as steep as it gets for the 5.4 grade, but probably 95% of the holds are jugs, so it’s a real romp. From there I dashed down through the poison ivy (past its peak, to be sure, but still plenty toxic) to the Royal Arch Trail, which I promptly left to march to the base of the Morning After, one of my favorite scrambles in the Flatirons with its not-immediately-obvious opening slab sequence, overhanging 5.7 roof crux, and low-angle fist crack. The summit even has an arch! 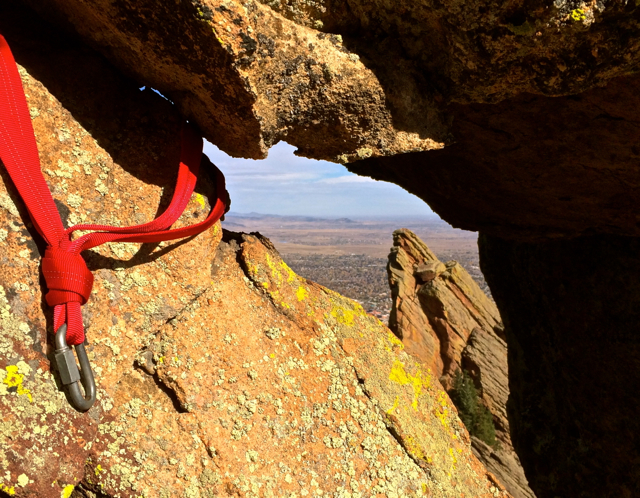 Third Flatiron as seen through the arch on the summit of the Morning After. Winky Woo climbs the face just above the evergreens.

My engines were still revved at this point, so I dispatched of this in a PR 5:10. My next objectives were the adjacent Green Mt Pinnacle West Chimney and Challenger. I love both of these formations—the chimney because it’s fun to climb something vertical, and Challenger for its surprising finger crack and magnificent arete. Things were still going great as evidenced by my 4:45 PR on Challenger. 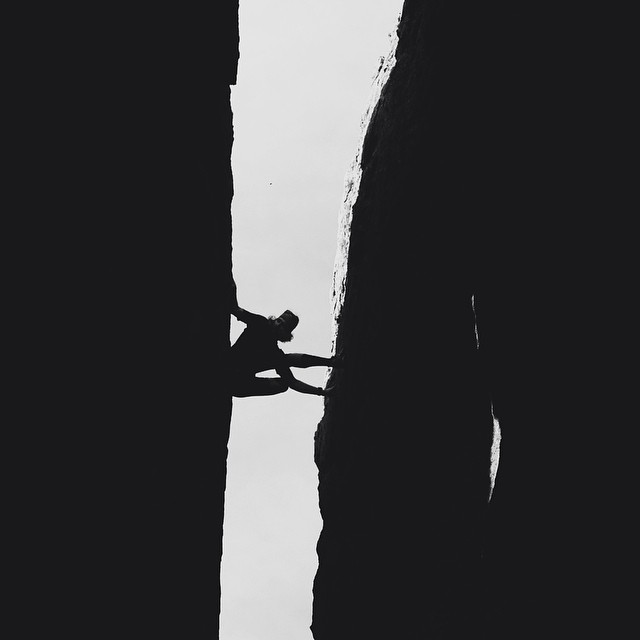 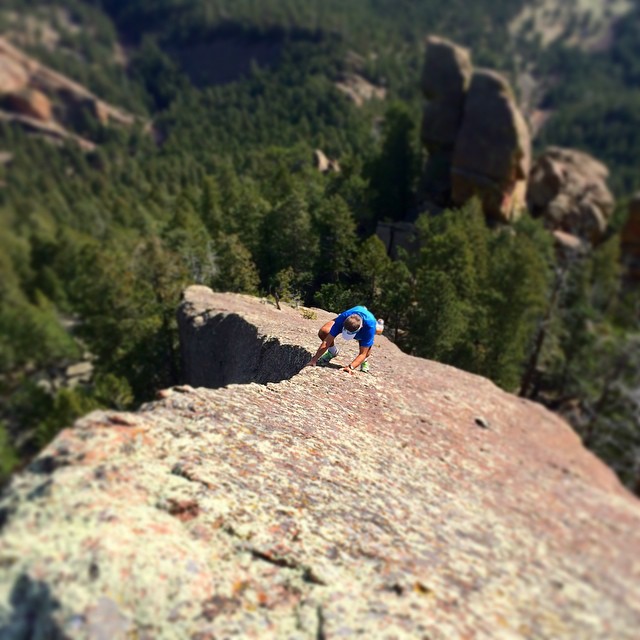 Next up was a downclimb of the Hammerhead via Yodeling Moves, which has to be about as good as it gets for 4th Class, and then a quick jog over to the base of the 5th Flatiron. I was a bit bummed to find that the spring was no longer running there (it was just a couple weeks ago), as I was starting to feel the day’s efforts a bit and could’ve used a drink.

I ascended the 5th by its most aesthetic line—the Northeast Buttress—and then downclimbed before popping over the pass at the base of the Fist that divides the mountain from Skunk Canyon, which has an incredible quantity of quality scrambling. 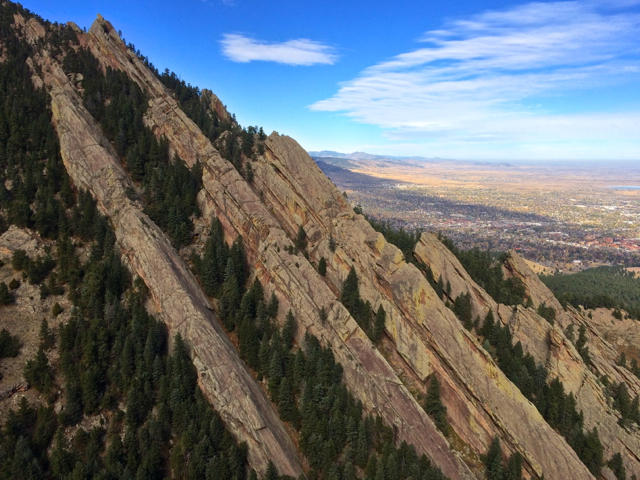 The five ridges of Skunk Canyon. Angel’s Way and Satan’s Slab being the two central rocks.

First up was a downscramble of Angel’s Way, which is way more intimidating when you look at it from across the drainage, but when you’re actually on it is really primarily a bunch of downhill crab-walking. Still I love the view when you first step onto it and look down the long ridge of rock you’re about to descend.

Now that I was at the bottom of Skunk Canyon, it was time to climb up the other side onto Dinosaur Mt. I’m not exactly sure why—definitely a lot of it was to do with how in the flow I was—but when I looked across to the Achean Pronouncement (the next formation on my list) I was immediately drawn to the crack separating the Lingum Pinnacle from the rest of the rock. This crack is called Electric Fountain Crack, and while the 5.4 hands-to-fist crack on AP’s east face is one of my favorite pitches in the Flatirons, today I was excited to try out this route on the back (west) side of the rock.

The bottom was scruffy with needles and lichens and a few loose blocks, but then the business started and I was a little surprised at its off-width nature. It went really well, though. There were just enough adjacent face holds to keep it feeling secure and climbing it in running shoes was even a plus, I think, because it made my feet jam in the ~4″ crack almost perfectly, sometimes even too well. With judicious lie-backing and foot-jamming I was soon at the top and scampered across the rest of the ridge (skipping the true summit of AP, as I always do…it’s steep and on crumbly rock. I’d want a rope.) to link almost immediately into the Primal Rib—easily the best arete formation I’ve climbed in the Flatirons. 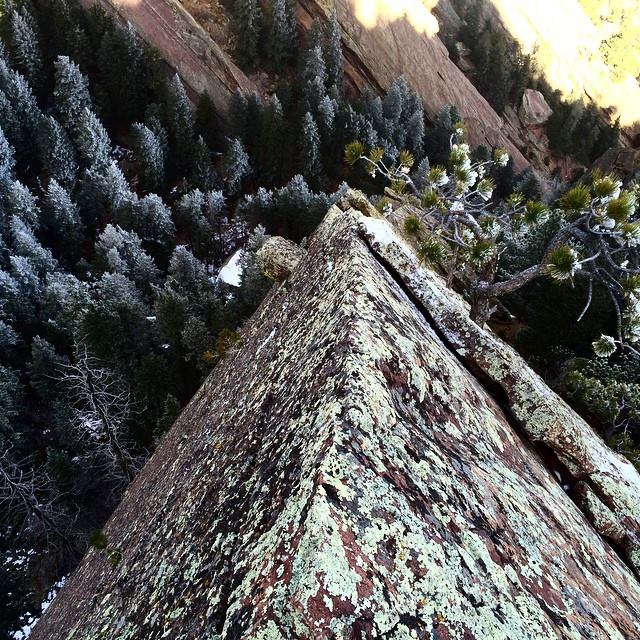 Emboldened by this ascent, I resolved to finally go take a look at the Backporch (just down the hill from AP and PR). This was one of the very few Roach Classics I had yet to climb and the only top-10 Classic of his that I hadn’t climbed. I’d always avoided it because: A) I’m too lazy to carry a rope up for the two rappels down the overhanging west face, and B) at 5.6, the standard East Face route always sounded too stiff to downclimb.

Nonetheless, today it went down easily with the steep stuff being on big, secure holds, and I can see why it’s a top-10 route. I’m not sure I’d put it in my top-10, personally, but it does ascend a prominent, tower-esque formation, the climb is atypically steep in spots for an east face Flatiron route, and there are some cool moves on it, including a lovely finger crack near the summit. On the way up I made sure I would be comfortable reversing anything that felt like a cruxy move, so the downclimb ended up feeling totally solid. Overall, this was a huge highlight for me, because this climb had been a sticking point on my list for a long time. 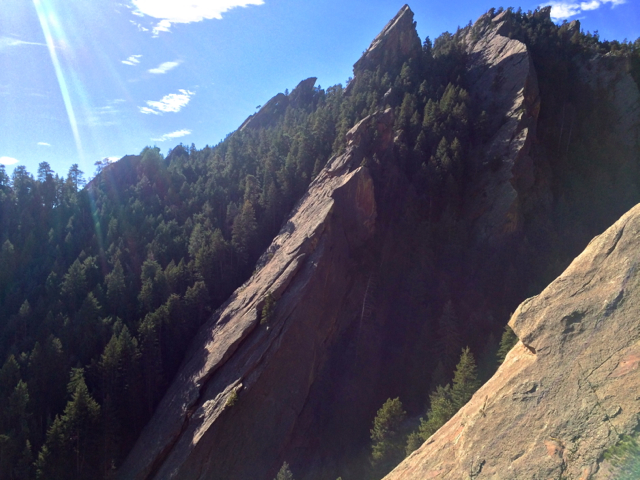 The Achean Prouncement, Primal Rib, and Back Porch (highest pinnacle) on Dinosaur Mt.

I’d had a few other Dino Mt scrambles semi-planned for the morning—Fi, Fo, Dino Rock, the Front Porch—but the sun was making a brief though intense appearance while I was on the Backporch and my now raging thirst was brought back into the forefront of my attention. As such, I bailed back down into Skunk Canyon for the final two formations leading to the summit of Green Mt—Satan’s Slab and The Fist. Scrambling these to the top of the mountain is one of my favorite things to do in Boulder. They link-up perfectly, the climbing on each is super engaging, and it’s a lot of scrambling. And after the final downclimb off the west face of The Fist, it’s only a clean <15min grunt to Green’s summit.

Within moments of stepping down off The Fist, it actually started raining—perfect timing!—and when I was just a couple minutes away from the summit of Green I had the pleasure of running into my friend Homie, who was out for a weekday wedding anniversary ascent of Green. Homie hasn’t been quite as active out in the hills this summer as usual, but he’s always been one of the most inspiring local legends for me in terms of pulling off all kinds of mountain adventures while working a full-time job and raising a family. Such a solid guy and really nice to see him out on the trail.

The rain had actually picked up slightly while we were standing around chatting, so I jettisoned any thoughts of tacking on the Amphitheater scrambles at the bottom of the mountain, but by the time I got down there the rock was completely dry, so I quickly scampered up T-Zero (really more of an easy highball boulder problem) and the southeast face of the First Pinnacle before running across the meadow back to my bike.  Super quality morning in the hills.