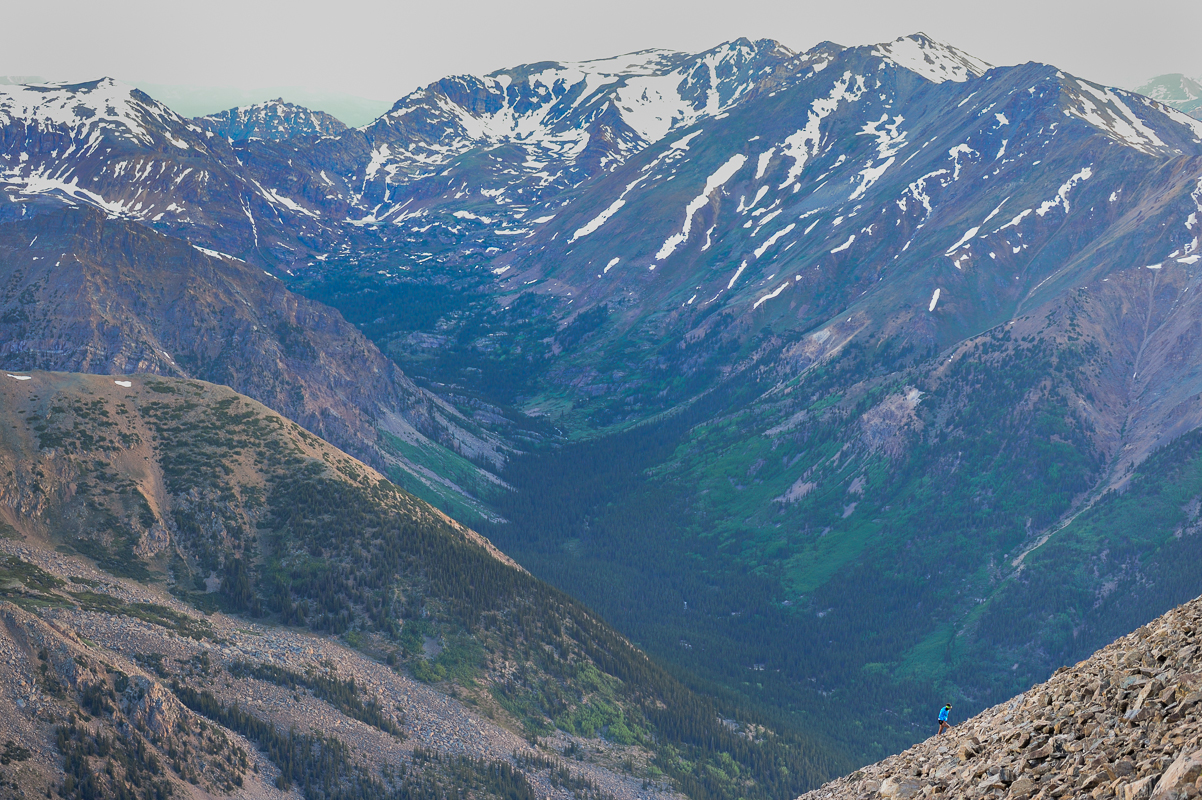 Since May 8th, I’ve been dealing with an achilles injury in my left heel. Insertional achilles tendinosis. As if ascribing it a label makes any fucking difference in my ability to do what I want with my body. This spring I was coming off a particularly productive season of skiing (by my standards), so I was cardiovascularly fit and ramping up the running in anticipation of any number of summer objectives (maybe even some races!). I remember that the possibility of tackling Nolan’s 14 in late June is what specifically motivated this particular outing (33mi/12k’). There was a lot of uphill.

I woke up the next morning with a very tight left achilles, but honestly, that’s been typical for me after long efforts for, like, almost 10 years now. So I went biking, which I’d planned anyways. The following day, I jogged through a flat run, but by the end I knew my achilles was fucked. It took more than six weeks to get back to 100%-ish (late June). I re-aggravated it with a week of big vertical and running outings in the Tetons and Wind River Range in early August, and sorta put the nail in the proverbial coffin with a long alpine run/scramble in Rocky Mt National Park in mid-August. I haven’t done any meaningful running, climbing, or scrambling on it since.

When I was in high school, I sucked at running, if one were to evaluate my racing by any objective standard. Sure, I ran more than anyone else, but even so, my meager talent allowed for only mediocre results.  I almost immediately compensated by taking solace in the fact that I was at least trying really hard, i.e. running way more than was reasonable or advisable. If I wasn’t going to win races, at least no one could accuse me of laziness or not caring.

This amounts to a sort of pyrrhic victory. Which is to say, not a victory at all. In fact, it’s kind of bullshit. There is no honor in running oneself into the ground.

In the beginning—even far after the beginning, in my case—assiduously cultivating an ironclad work ethic was the main goal. So much talent is squandered due to lack of motivation, lack of work ethic, lack of discipline. It has always been (at least for me) really difficult to differentiate between feeling reluctant to run because I’m overworked and tired (and thereby flirting with injury) and feeling reluctant because maybe I’m just being lazy or perhaps not tough enough. One of the things that really attracted me to the sport in the first place was the individual responsibility. If I was going to suck, it was going to be on me, not contingent on the apathy of teammates. So, from the beginning, I was determined to at least not fail due to laziness.

I distinctly remember lying on the floor in front of the propane heater in my childhood home, blissfully soaking up the hot air on winter mornings while waging an internal battle between just rolling over, giving in to the cozy comfort and skipping the morning run…or instead rousting myself, getting dressed, and heading out into the icy pre-dawn darkness for the 7mi jaunt into town for school. I was 13. What the fuck.

But back then (1997) I was <5’ tall, 85lb, and basically indestructible. Over the 20 weeks of that winter and then spring track season, I averaged more than 80mpw and ultimately logged more than 3000 miles on a single pair of retro Nike Cortez that I’d gotten for $1 at a thrift store. I basically didn’t know that running injuries were a thing.

Less than a year later, they most definitely were a thing, as I incurred my first (of ~15) stress fractures–this one in my left tibia–in November 1997. Back then, only 14 years old, I healed absurdly quickly, and I was back out there only three or four weeks later. But then it was my achilles, my hip, a femoral stress fracture, my hamstring, etc, etc. The last 20 years have basically been one injury after another, because once I’d gotten through the growing pains of puberty, it was back to that old trope of outworking everyone else and, suddenly, I found that, in my 20s, I could handle up to 200 miles per week of running, for at least a few weeks at a time, before something broke down.

Nevertheless, this obsession—combined with finding my niche in the then competitively immature sport of ultra trail running—allowed me to finally find success as a runner. Volume became both my security blanket and, ultimately, my foil. Due to my lack of success in the conventional (sub-ultra) racing distances, I’ve always denied that I have any talent as a runner and have always tried to make up for that with sheer volume.

Ultimately, whether I have any talent (I’ve accepted that I do, for what it’s worth) has become irrelevant, because I can’t fucking run. And I’d still really, really like to. Races and not. Recently, my physiotherapist made the assumption that I was still running 30-4o miles per week these last couple months (I haven’t, obviously). Gimme a fucking break. If I could run that much—consistently—I wouldn’t be here bitching about it so much! Being able to handle 40-50mpw with additional skiing or biking (season dependent), would be utopia.

Is that too much to ask? Did I really fuck myself with all those years of pointless miles? Is that why my Achilles hurts? (The prominent Haglund’s Deformity that I’ve had on that heel for literally as long as I can remember might suggest yes.) I still have so much shit I really want to do. Maybe I don’t deserve another chance, but, man, I’d really appreciate one.

95 responses to “Injuries and Related Thoughts”