7/14/2014
Mon – Handies Peak (2:01, 4500′)
Parked at the Grouse Gulch aid station spot and headed up and down the mountain via American Pass. I never really realized it, but the vast majority of people who climb this mountain are doing it from American Basin or even Burrows Park. It’s a long hump from Burrows, but there isn’t the frustrating 500′ loss in elevation that occurs when dropping into American Basin from the Grouse Gulch approach. The summit held a large, enthusiastic high school cross country team from Missouri. Cool to see them getting out and enjoying Colorado, but I wasn’t very inspired to hang out up there for long myself. I guess I’m turning into a bit of an old man; dammit!

7/15/2014
Tue – Mt. Sneffels (2:00, 3700′)
This was to be the final test for whether I would run Speedgoat this weekend as from where I park on Camp Bird Road it leaves a pretty long running approach to get to the peak proper. Unfortunately, it didn’t leave me very confident in my shin. It tightened a bit here and there, which was disappointing after no protestations the last couple of days. It’s still far happier with mostly-hiking outings. With that decided, I got in the car and drove back toward the Sawatch and the Front Range instead of the Wasatch. Bit of a bummer, because I really like Speedgoat, but I think the prudent thing is to make sure this is 100% before I head over to Europe.

7/16/2014
Wed – Mt. Princeton (2:23, 6000′)
Good lord I love the Sawatch! Certainly part of it is the familiarity—I spend a lot of time here—but the scale of the place is pretty hard to dismiss, too. Most of the 14ers offer nearly vertical miles of ascent, and there are a lot of 14ers to choose from. It’s a dramatic landscape. This morning I started from the Grouse Canyon “trailhead”, which is really just knowing where to pull off the main Forest Service road. Heading up and down Princeton on this route is one of my favorite lines in the Sawatch and today didn’t disappoint. It had rained (poured) overnight, so down low in the canyon I got soaked from all the moisture still on the foliage, but by time I got onto the main side drainage I was feeling great and marched out a great pace to the long, scrambling ridgeline leading to the summit. Despite hiking every step I managed a 3min PR—1:29 to get to the summit with ~5500′ of vert (there are a few bops and rolls on the ridge adding to the total)—which was a nice confirmation of my current fitness, but I didn’t wait long up top as lots of clouds were swirling everywhere, threatening precip. Sure enough, on the descent, as I left the ridge I ended up getting a little graupel that turned into rain, but, thankfully, no thunder or lightning. Great morning out.

7/17/2014
Thu – North & South Arapaho Peaks (13,502′ & 13,397′) (2:05, 4000′)
Parked at the 4th of July TH and after about 90sec of trail I veered right and charged straight up the hill into a wildflower-filled basin and eventually over to the Arapaho Glacier Overlook before climbing up to the peaks themselves. The initial 1500′ or so out of the parking lot is some of the most consistently steep, non-rock terrain I’ve encountered anywhere, and probably about the steepest grass I’ve seen. Really ideal for minding my shin while still working the legs and lungs. This vert is scaled in only half a mile and today took me ~22min. Fun stuff. It’s been two years since I tagged these summits, so the Class 3-ish ridgeline between the two peaks took me a couple extra minutes. It’s really fun if you stay right on the crest the whole way, but, unfortunately, that isn’t really necessary and a mostly probably Class 2-ish line exists just 50-100′ or so downslope to the west. But that’s no fun. The ridge had a bunch of swirling clouds and mist that offered an eery ambiance, and overall it was just a brilliant day that reminded me of the magic of the Indian Peaks. A real gem of terrain to have so close to Boulder.

7/18/2014
Fri-AM: North & South Arapaho (2:03, 4000′)
An exact repeat of yesterday’s “run”, except I did the traverse between the two peaks four minutes quicker. Fascinating. Basically, I just knew where to go today. Marching up out of the parking lot it looked like it was going to be a brilliant bluebird morning, but then the sun slipped behind a big lenticular cloud and that eventually turned into a more substantial cloud bank accompanied by a chilly, whipping wind up on the traverse. On the descent I even got a few sprinkles of rain. Great outing.
PM: First Flatiron (0:52, 1600′)
Started from Baseline and basically hiked every step (well, save the scrambling on the rock face) to be nice to my shin. Was either bonking or really hopped up on coffee, because my legs felt pretty shaky.

7/19/2014
Sat – North & South Arapaho (2:11, 4000′)
With it being the weekend, I expected a frustrating crush of humanity at the trailhead and while it was certainly busy—I had to park 1/2mi down the road—for some reason I wasn’t that bothered by it. Once actually out on the mountain, too, it was barely different from a typical weekday; I think most people stick to the simple Arapaho Pass trail and don’t venture up to the Glacier Overlook (which I pass on the way to the summits themselves). Like, I’m sure, everyone else, I was just grateful to get out of the upper-90s heat down in Boulder.

7/20/2014
Sun – Longs Peak (2:43, 5000′)
Up Kieners/Stepladder, down Cables. Spend too much time on the Front Range in the summer and it’s hard to stay away from Longs. I decided to head into the Chasm Lake Cirque so as to make my non-running locomotion more tolerable. Things have melted considerably, but I was pleased to still find perfectly kickable snow for the traverse across Lambs Slide. After scrambling up through the Crux Cracks (chimneys) at the bottom of Kieners, I decided to just keep heading straight up, parallel to the Notch Couloir to access the Stepladder and Skyline finish to the summit of Longs (Kieners technically finishes with 3rd/4th Class scrambling along the edge of the Diamond). Fun doing a little exploring up there. The descent was dramatically expedited by the absence of snow on the North Face, and then it was just managing the shin on the trek down through the Boulder Field and Jim’s Grove. Love this mountain; life-time ascent #48 for me. 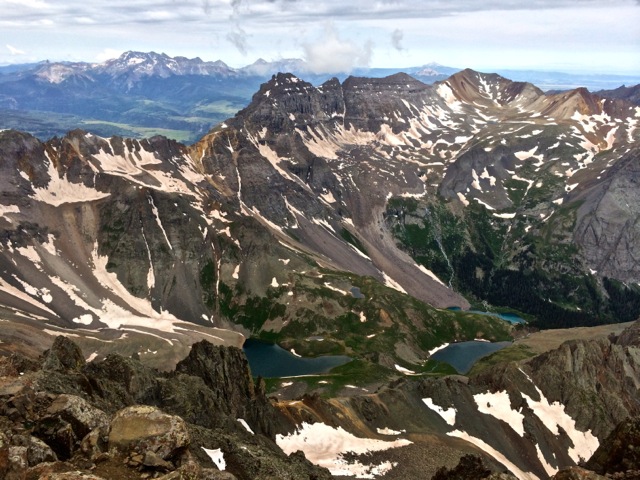 Blue Lakes, as seen from the summit of Sneffels. 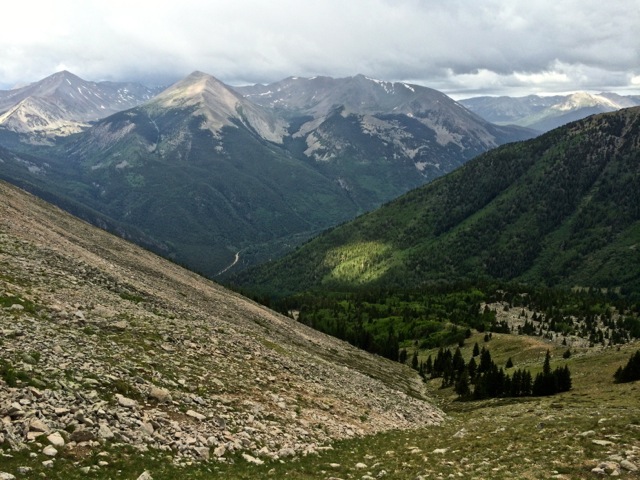 When descending Mt. Princeton, this is what the top of Grouse Canyon looks like after dropping right/west off the ridge at ~13k’. Descend directly into the drainage, don’t go farther west. 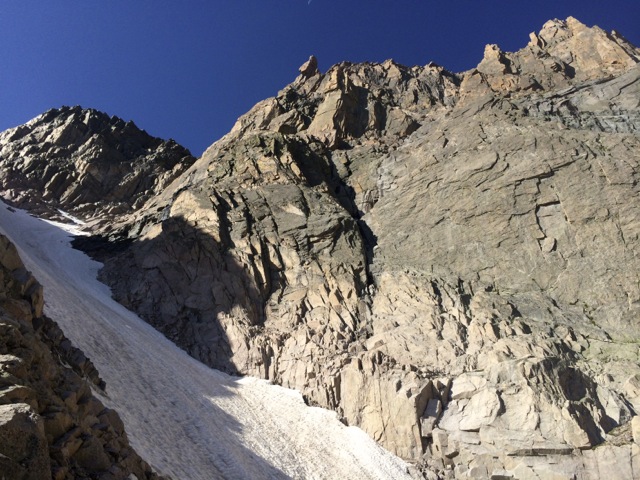 What Lambs Slide is looking like these days. Near the right, a pair of climbers on Kor’s Door, I think (between Alexander’s Chimney and the Stettner Ledges). 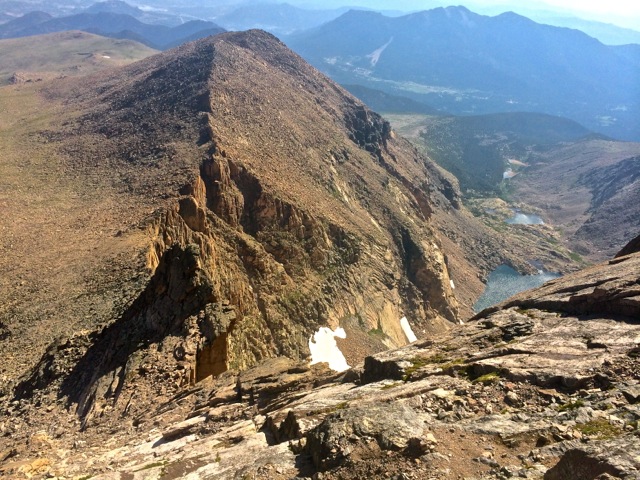 The Cables downclimb is barely even wet these days. 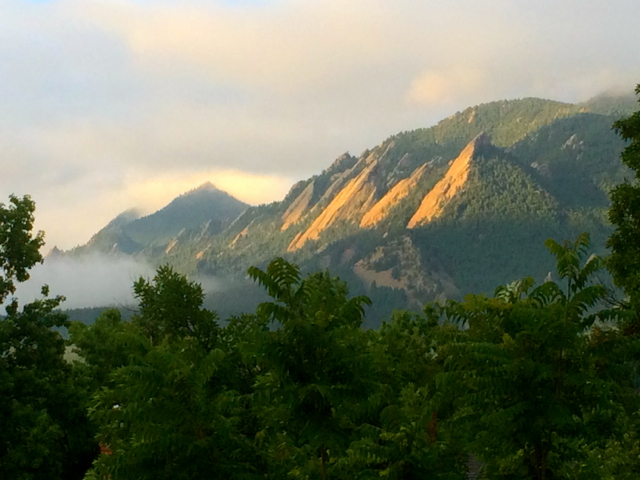 Sometimes even my bedroom window in Boulder offers a pretty nice view.

Without already being a fan of the songs and/or the artist, I can see where this recent NPR Tiny Desk performance would come across as not being terribly remarkable. But, I am a fan of both the songs and the artist, so I enjoy it. Either way, the power and range of Leithauser’s voice hasn’t seemed to diminish any in recent years (maybe best showcased by this blistering performance from what I think is The Walkmen’s best album (You & Me)).

I also recently read this article in The Atlantic about Leithauser’s creative process that I found to be pretty interesting.