Phew, just trying to catch up here.
Short version: I’ve mostly been hanging in the Sawatch, taking the steep ways up and down really big hills. My shin kinda hurts. Sometimes.

7/21/2014
Mon – 1st & 2nd Flatirons (0:58, 1600′)
Biked up to Chat under the merciful cover of some high, thin clouds—it would’ve been unbearably hot otherwise as temps have been pushing into the upper-90s in Boulder lately—and resolved to just take it easy on the shin, all hiking and scrambling, no running. After the usual lap on the First Flatiron, I spontaneously jumped onto the Second Flatiron on the way down at the top of the Freeway and downclimbed it. “Downclimb” is a bit misleading as there were only a couple of very brief sections where I was actually even turned face-in to the rock. The vast majority of the Freeway is 4th Class-ish and I spent most of the 9:10 it took to descend the route facing out essentially crab-walking down the rock. With some practice downclimbing from the true summit (which would require reversing some quite more difficult terrain), today was the first time that I saw Buzz’s technique of downclimbing the Second while linking up all five Flatirons to be a reasonable/quick tactic. Still not one I really appreciate aesthetically, but I think it certainly would be faster for the link-up.

7/23/2014
Wed – nothing.
I felt it coming on yesterday, so when I woke up this morning with a super-painful throat, raging headache, and full-body/muscle-aches it was an easy decision to just take it easy today. Really weird to feel like this in the summer.

7/24/2014
Thu – Eldorado Canyon New Balance Fresh Foam Trail group run (0:29, 200′)
New Balance was releasing their new trail shoe (Fresh Foam 980Trail) to a group of running media folks today, so I was on hand along with other NB trail runners to lead a run down in Eldorado Canyon and participate in a Q+A afterwards. I was pleasantly surprised to have my shin feel close to pain-free on this short-but-all-running outing. It gave me confidence that I could at least start doing some heavy duty hiking on my shin again.

7/25/2014
Fri – Mt. Elbert (2:32, 4500′)
Up and down the Northeast Ridge. After yesterday’s encouraging run on the shin I decided it was time to head back up to the high country where doing the Nolan’s routes would keep me in mostly hiking mode. This standard route on Elbert is quite direct and lends itself to a good hard hike. After summiting in 1h20, I was pleased with myself for hiking every step of the downhill, a task I usually find fairly infuriating, but today I was just so happy to be back up in the big mountains that it wasn’t too frustrating an ordeal.

7/26/2014
Sat – Mt. Princeton (2:29, 5500′)
Up and down Grouse Canyon. Such a lovely outing. This line requires hiking nearly every step (except for some short stretches on the ridge) and is steep enough that on the way down—even when “running”—I’m forced into a style of biomechanics that doesn’t fire up my shin the way more conventional running on smoother, flatter surfaces does.

7/27/2014
Sun – Mt. Antero (2:55, 6000′)
Up…North Ridge? ish? Down West Ridge/Baldwin Gulch. On yesterday’s grunt up and down Princeton I had exceptional views south across the valley to Antero and couldn’t help but notice that taking the gravel road through the small community of Alpine, crossing Chalk Creek on the bridge, and then heading up the Baldwin Gulch jeep road seemed like a terribly inefficient and out-of-the-way route for ascending Antero for the link-up. Instead, it seemed that one could ascend an avy chute straight across from Grouse Canyon, gain Antero’s long, undulating north ridge, and take that to the summit. Not so. The incredibly steep avy gulley gained ~3k’ in no more than 1mi—with much bushwhacking—and then the ridge itself had too many sub-summits with unstable talus/scree preventing any contouring. Result: exactly zero time gained by taking that route. I descended my more usual Nolan’s route of ascent—west ridge directly off the summit down to the jeep road at ~11k’. I did scout a shorter drop off the jeep road down to the St. Elmo Rd that will surely cut some time, however. The 2mi of flat-to-slightly-downhill running on jeep road was promising for my shin, though. Minimal twinges.

7/28/2014
Mon – Mt. Yale (2:25, 5000′)
Up and down from N. Cottonwood Creek. This route requires a 1.5mi flattish trail approach and de-proach again at the end, which after yesterday I was interested in running to see how the shin would respond. It was ok. I could feel some twinges on the way in but it was pretty much fine on the way out. The route in-between was the usual Nolan’s gnarliness of bushwhacking down low and steep tundra marching up high.

7/29/2014
Tue – Mt. Princeton (2:23, 5500′)
Up and down Grouse Canyon. After yesterday’s twingy shin I wanted to go back to my safe-zone route today to give it a break. This is definitely the Nolan’s route in the southern Sawatch that’s the kindest to my shin. Despite waking up feeling 100yrs old, once I laced up the kicks I felt fairly amazing and managed to squeak out a 15sec PR on this route. Not much, but I’ll take it, especially since it was a full 7min faster than when I stumbled up it back on Saturday.

7/30/2014
Wed – Mt. Antero (2:43, 5000′)
Up and down Baldwin Gulch/West Ridge. Great run; my shin never hurt, which was amazing considering this ~9mi roundtrip contains ~5mi of proper running on dirt road. Scouted the shortcut up to the jeep road and, indeed, it trimmed the ascent from Chalk Creek at the bottom of Grouse Canyon to 1h38, 1.5mi and 10min shorter than running all the way through Alpine. Today, I finally felt like, “Yes! I can still do UTMB!”

7/31/2014
Thu – Mt. Princeton (2:29, 5500′)
Up and down Grouse Canyon. More of the same. After yesterday’s euphoric, pain-free run, I played it safe today by going back to my hiking route, not wanting to push the shin by trying to continually increase the percentage of running in each day’s outing.

8/1/2014
Fri – Huron->Missouri->Belford->Oxford (4:49, 9500′)
Started from Winfield and finished at the Missouri Gulch TH, taking the Nolan’s route, with Anna. Anna is interested in taking a serious shot at the link-up of the Sawatch 14ers next year, so is intent on getting as much route knowledge as possible this year. As such, I agreed to show her the best line from Winfield to Belford this morning. The strong monsoonal flow weather pattern continued today, and after we left my truck at the Missouri Gulch TH, we drove to Winfield and embarked under typical cloudy, misty, stormy-looking skies. I only had a couple of twinges in my peroneals on the 18min run over to the Huron TH, and then it was a march up into the clouds. Things really got soupy the last 500′ or so to the summit, so I quickly turned and ran back down to the saddle to wait for Anna to tag the peak.

Despite the graupel, there were occasional partings in the clouds that let me point out the best way down the scree chute to the boulder field above Clohesy Lake. The scree was in excellent condition thanks to the moisture, but the trade-off was that the licheny boulders were frustratingly slick. I showed Anna the best line through this section and onto the elk path down to the Clohesy Lake stream crossing, and after directing her onto the excellent trail leading up Missouri, opened up my stride and made quick work of the day’s second 14er. Above 13,500′ or so it was back into the thick clouds, so on the summit I waited for Anna again to make sure she took the correct route down towards the Missouri-Iowa saddle.

Leaving Anna to fend for herself (she was on familiar terrain after Elkhead Pass), I did maybe my best job ever of picking a line through the scree and talus that leads to Elkhead Pass, and on the way over Belford and Oxford the clouds finally opened up a bit and I got my first rays of sun on the day. Anna skipped Oxford, so I was chasing her on the now-rainy descent down Belford and caught her right at the Missouri Gulch TH, perfect timing.

Awesome day out on the hills; my shin obliged the day’s efforts until the mostly-running out-n-back to Oxford and then twinged a few more times on the flatter bits descending through Missouri Gulch. I wanted to see how it responded with a longer effort, and the results weren’t entirely positive. However, despite the UK Fells-like weather, I was reminded of why I love linking up these Sawatch 14ers so much: it’s just such pure movement in a truly inspiring, humbling landscape.

8/2/2014
Sat – First Flatiron (0:50, 1600′)
From Chautauqua, with Joe. Today was my 31st birthday. I’m a bit confused as to why the Internet seems to think it’s August 8th. In order to maximize the amount of time with my parents today, I rose early and stopped off at Ozo–the only coffeeshop on West Pearl open at 6am–for a quick shot of espresso. To my surprise, Joe pulled in for the same, shortly after I did, so we headed up to Chautauqua together for some scrambling. I could tell my shin wasn’t particularly happy with yesterday’s longer outing, so while Joe had ambitions for a full Flatiron Quinfecta (the Third re-opened yesterday), I knew I needed to limit myself to just the single slab, and hiking. The cool early morning air was a pleasure and after being out of town for over a week I was happy to unexpectedly reconnect with Joe. The shin hurt, though.

8/3/2014
Sun – Satan’s Slab (1:30, 1700′)
From NCAR, with Joe. My birthday always seems to sour my mood a bit, and with my regressed shin, I wasn’t super psyched on anything today. Joe convinced me to join he and Deanne for a hike, which ended up with Joe and I hitting the Devil’s slab. Joe had climbed this yesterday as part of his flatties link-up, eschewing the 4th Flatiron for the much more aesthetic but difficult Satan’s Slab. So he had some confidence on the route and was happy to go up in his super-sticky dot rubber re-soled Inov-8 243s. Impressive.

I, on the other hand, was pretty severely lacking in confidence—especially given the +90F afternoon heat and direct sunshine—so I opted for climbing slippers and even a chalk bag. A first for me when it comes to scrambling. Satan’s is a committing scramble. The Mountain Project description has a sentence I like: “This is the final exam for all the Flatiron slab-mongers out there.” I concur (though I’ve yet to get on the Ironing Boards). Although Joe and I agree that there are two definite cruxes, each of those feels pretty tenuous for the grade, and overall, the scrambling difficulty seems quite a bit more sustained than on any other flatiron I’ve done. Keyhole Ridge on Longs Peak garners the same grade and I feel way more secure on that scramble; it’s not a problem in running shoes. Even so, the climbing was a pleasure and afterwards we lingered in the freshly-scoured Skunk Canyon drainage, enjoying the water and slickrock and sunshine and summertime. Followed up with burgers and brews at Southern Sun, my mood was drastically boosted by the end of the day. 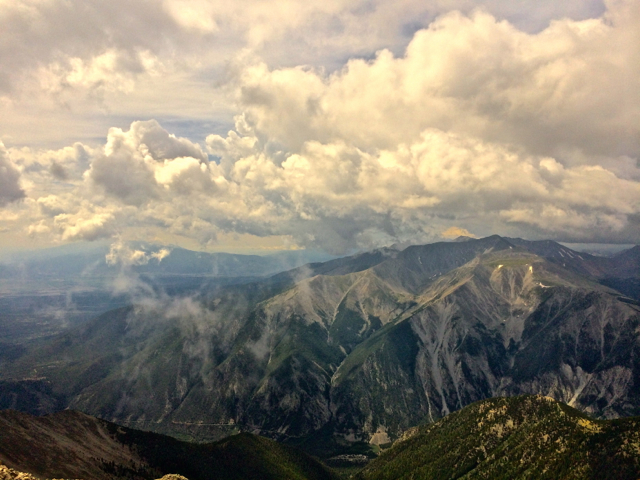 A stormy view of Antero from the summit of Princeton. Been enjoying this view a lot lately.

Pete Bauer is another former member of The Walkmen who has recently released a solo album. I bought it not really expecting much and have been pleasantly surprised. Each song seems to be a little different style and overall I’m really enjoying it.