6/02/2014
Mon-AM: Mt. Elbert (2:07, 4500′)
Up and down the NE ridge from Halfmoon Creek. Surprising energy in the legs this morning; I ran more of the steep stuff than I thought I would. Snow conditions are also much better than I thought they would be, really only an issue in the usual 500′ below treeline. It was odd, though. At some point on today’s outing it felt like the last 9 months didn’t even happen to me, like I was picking up right where I’d left off last summer, marching uphill through thin air and brilliant sunshine over talus and scree. There’s definitely something special about the big relief here in the Sawatch.
PM: East Leadville (0:47, 500′)
I’m trying to maintain more consistency with the proper running this summer, so I got out for what was my usual post-work evening jog when I was a barista at the local coffee shop a few summers back. It was lovely. Leadville has its quirks and certainly isn’t for everyone, but I’ve been coming up here regularly in the summer for eight years now (!!) and when I slot into my routines here, I feel like I’m really getting into shape.

6/03/2014
Tue – Highline Trail (1:02, 1300′)
Ugh. One of those days. Set off from the Fish Hatchery with intentions of summiting Massive, but right from the beginning I could tell my legs had nuthin’. Plunked along up to the Colorado Trail—hiking pitches I always run—hoping that things would come around, but by time I got to the CT I was almost a little concerned I wouldn’t even have the mojo to stumble back down the hill to the parking lot. Afterwards, I realized that it had been four weeks since I had a day appreciably under 2hr, so today’s fatigue shouldn’t have been a surprise. It happens. Took a nap and ate a lot of food.

6/04/2014
Wed – Mt. Massive (3:16, 5000′)
After yesterday’s disaster, I was just hoping to get to the top of a mountain today. Could’ve chosen an easier one, damn. Started from the Fish Hatchery again and took my “Nolan’s” route to the top, which involves taking the Highline Trail to 11,100′ or so and then charging up through the woods to treeline at the base of the East Ridge, which I then take directly to the summit. I definitely had more pep today than yesterday, but things still felt a bit off, which wasn’t helped by the exquisitely frustrating postholing/wallowing through the isothermal snowpack between 11k’ and treeline. Definitely was not charging. It was such a relief when I escaped the trees, the snow firmed up or disappeared, and I could just focus on marching uphill. These shenanigans added a good 20min to my usual ascent time, and convinced me that I should try a different way down, i.e. taking the standard east face trail down to the Colorado Trail and contouring on that back north to the Highline Trail and the Fish Hatchery.

This was a great plan at first. I was able to glissade directly off the summit of Massive for a spectacular 1400′ drop in only 5min. Probably the best snow sliding of my life, staying on my feet the whole way. The Colorado Trail, however, hovered around the 11k’ level and still had a frustrating amount of snow on it. Even with popping my emergency GU I was bonking hard on any little uphill and it was so nice to finally be going back downhill once I turned onto the Highline Trail.

6/05/2014
Thu – Mt. Elbert (2:23, 4500′)
After the last two days of low energy I was really happy to have the usual bounce back in my pins this morning. My run today took me up the West Ridge of Elbert before descending the standard NE ridge trail, and it’s one of my favorite loops in the Sawatch. The first 45min are runnable two-track with only 1500′ or so of gain getting around to the backside of the mountain, but then the tenor of the outing changes completely with a 1mi/3000′, hands-0n-knees/ground beeline to the summit. Boom! Talus scrambling at its finest. The summit held absolutely perfect conditions—vacant, windless, brilliant sunshine—and I just took it easy on the downhill, saving my legs for tomorrow’s ambitious plans.

I feel like climbing this mountain—Colorado’s high point at 14,433′—is almost cliche, but a lot of things about it appeal to me, not least of which is its convenience. It’s two frontside routes—one from the south, one from the north—are heavily-traveled, but I’ve never seen another person on the other three routes I take (West Ridge, Black Cloud, and Echo Canyon/Bull Hill), and they are among my favorite routes anywhere in the Sawatch. And they’re all on the same mountain! As such, today was my 35th ascent of this peak, second only to my 42 ascents on Longs Peak amongst my 14er tick-list.

6/06/2014
Fri – Massive & Elbert (4:33, 9000′)
Joe and I planned on linking up the first three peaks on the Nolan’s chain—an arduous run from the Fish Hatchery to Winfield that I’ve used to kick off the season the last two years now—but on the summit of Elbert, it seemed to us that the weather had different designs. To avoid the postholing I’d encountered on Wednesday, we started our run from Halfmoon and took the CT over to our snow ascent of Massive’s east aspect. Joe’s wizard sticks proved highly efficient as I punted up the steep slope with only my two feet for propulsion and we enjoyed a fast if quad-burning descent of Massive’s southwestern slopes together.

After fording Halfmoon Creek, I pulled ahead on the uphill running approach to Elbert’s West Ridge—Joe’s poles were no help there—and began the march up the back of the mountain under rapidly-clouding skies. A snow squall blew through a few hundred feet below the summit, and when I got to the top, menacing clouds seemed to be moving in from all directions. When Joe showed up, he agreed that it wasn’t really worth it to tempt the electricity gods, so we descended Elbert’s standard NE ridge back to his truck. Of course, the skies over La Plata appeared to eventually clear, but I tend to want to save my lightning luck for when I truly need it, like during the middle of a race or when my options for retreat aren’t nearly so expeditious. Still a fun outing with two giant climbs.

6/07/2014
Sat – Mt. Yale (2:33, 5000′)
Surprisingly, I ended up feeling relatively spry on this ascent—from Avalanche Gulch via the CT and Yale’s East Ridge—but the descent down the Avalanche Gulch basin was a bit of wreckage for me. I was excited to show Joe what I think is the best descent for the Nolan’s line, and it started off well with great boot skiing down snow fields into the basin. But, some slipping rubber on a routine rock saw me take a tumble that resulted in a particulary gory gash right on my shin bone. It was split open something fierce, but after wrapping it tightly with my Buff I was able to continue on with the next complex part of the route through a couple boulder fields and plentiful deadfall. Of course, with babying my shin I managed to turn my opposite ankle hard enough to make it pop audibly. I still picked the line perfectly, though, and 52min after leaving the summit I was back at the Roost for some quick dressing and bandaging of my wound so as to ward off infection. A few days later, it still hasn’t quite closed completely but it’s headed that way and there are no signs of infection.

6/08/2014
Sun-AM: Garden of the Gods 10mi+4mi warm-up and cooldown (1:31, 1000′)
Holy moly, trying to run quick on the roads is a whole different kind of athleticism compared to what I usually do, and especially in comparison to what I’ve been doing all week (i.e. hiking/scrambling up and down talus and tundra). To kick things off, I missed the start by about 20 seconds. So, I just clicked my watch at the gun and waited for the first pack to go streaming past me before I jumped in to start my race. The first mile down El Paso Blvd lulls you in, thinking this is going to be all fun and games, and then a hard left turn presents you with the climb up into the Garden to Balance Rock, and, if you’re intent on giving your best effort, you realize this is gonna hurt. The race is generally either up or down, rolling through a continual series of 100-150′-ish climbs and descents. I know, big deal, right? But those suckers hurt, exacting a more significant price each time. For the first half of the race, I was in the general vicinity of the 3rd place woman—Romanian 2:24 marathoner Nuta Olaru—by which I mean, generally 10sec or so back. Finally, around 5mi in I seemed to find my groove a bit and began to gradually pick off a handful of runners.

Running an ~1hr race like this with relatively consistent terrain reminded me of the slow-motion game that is racing uphill at high altitude, i.e. no one just blows by anyone else. Passes are these excruciating, drawn-out affairs. If you’re the one doing the passing (which, thankfully, was the case for me in this race), the moment of eclipse is anticipated for a long time, several miles even, and when it happens, it is awkward and fraught with effort, but also glorious. Finally, I have caught this person! In the last couple of miles, though, I ended up in a no-man’s land about 45sec behind the runner in front of me and a similar distance ahead of the runner behind me, so it was easy to lose motivation and just maintain, especially since the 2yr-old neuroma in my right foot was particularly fired up from all the unbridled, downhill, pavement pounding.

In the end, I thought I had snuck in a couple ticks under 1:01, but it ended up being 1:01-flat. I had been hoping to break 1hr, but the sub-6 miles on this course were very few for me, and my spectacularly unrested legs just couldn’t seem to clunk up the hills any faster. At least I negative-split it by over a minute (as if that’s worth anything), whereas it seemed everyone around me ran more evenly. Overall, it was an extremely fun morning. The psyche and general vibe was through-the-roof positive—I guess that’s to be expected when you put 1500 runners in one spot—and it was fun to catch up with some COS friends that I haven’t seen in a while.

PM: Cameron Cone (2:12, 5000′)
Had a great run between (well, during, actually) thundershowers in Manitou this afternoon. I parked at Memorial Park in Manitou and ran up Ruxton to the Cog before deciding that the thunderclaps were a little too close for comfort. After running all the way back down to Soda Springs Park (adding a few hundred vertical feet to the day’s total) I could see that things were clearing behind the squall that was blowing through, so I turned around and resumed my run up the Cone. Conditions were ideal. The precip had made the trail nice and tacky and my legs had some good pep in them despite the morning’s efforts. Summited in 1:06 from Hydro St—far off my best of 1:01—but the atmospheric conditions (even some fresh snow/graupel on the 10,707′ summit!) made for a great outing. I love this particular hill. Finished out the week with ~110mi, 20h24min, and 35,800′ vert. 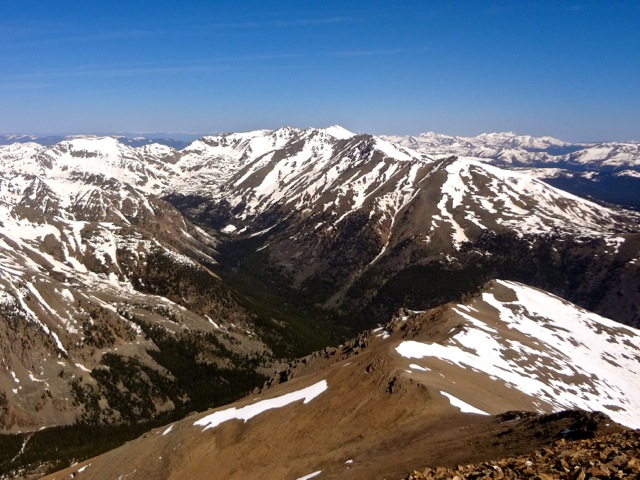 Looking back at Massive from the summit of Elbert. 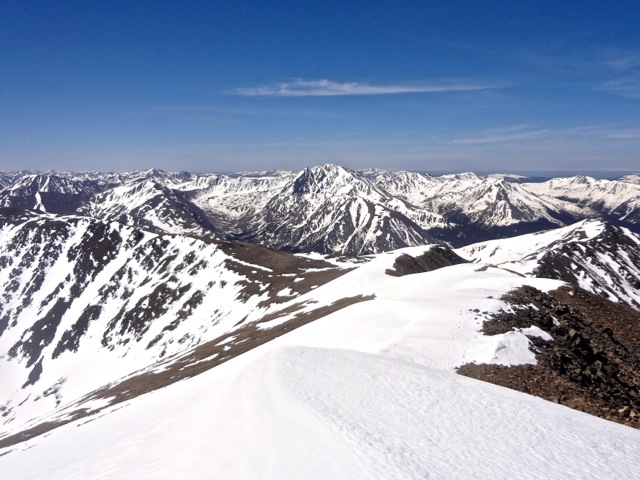 And La Plata in the other (southwesterly) direction. Looks snowy, but it’s really not that bad. 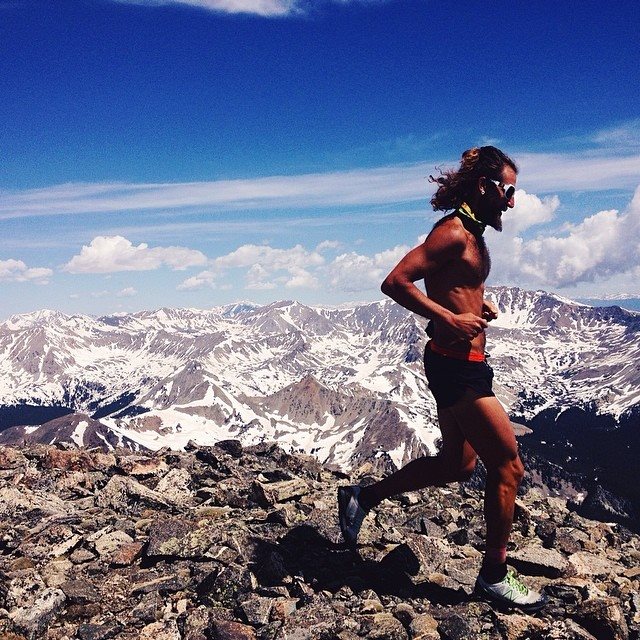 Sorta the way I feel about the Sawatch Range in the summer.