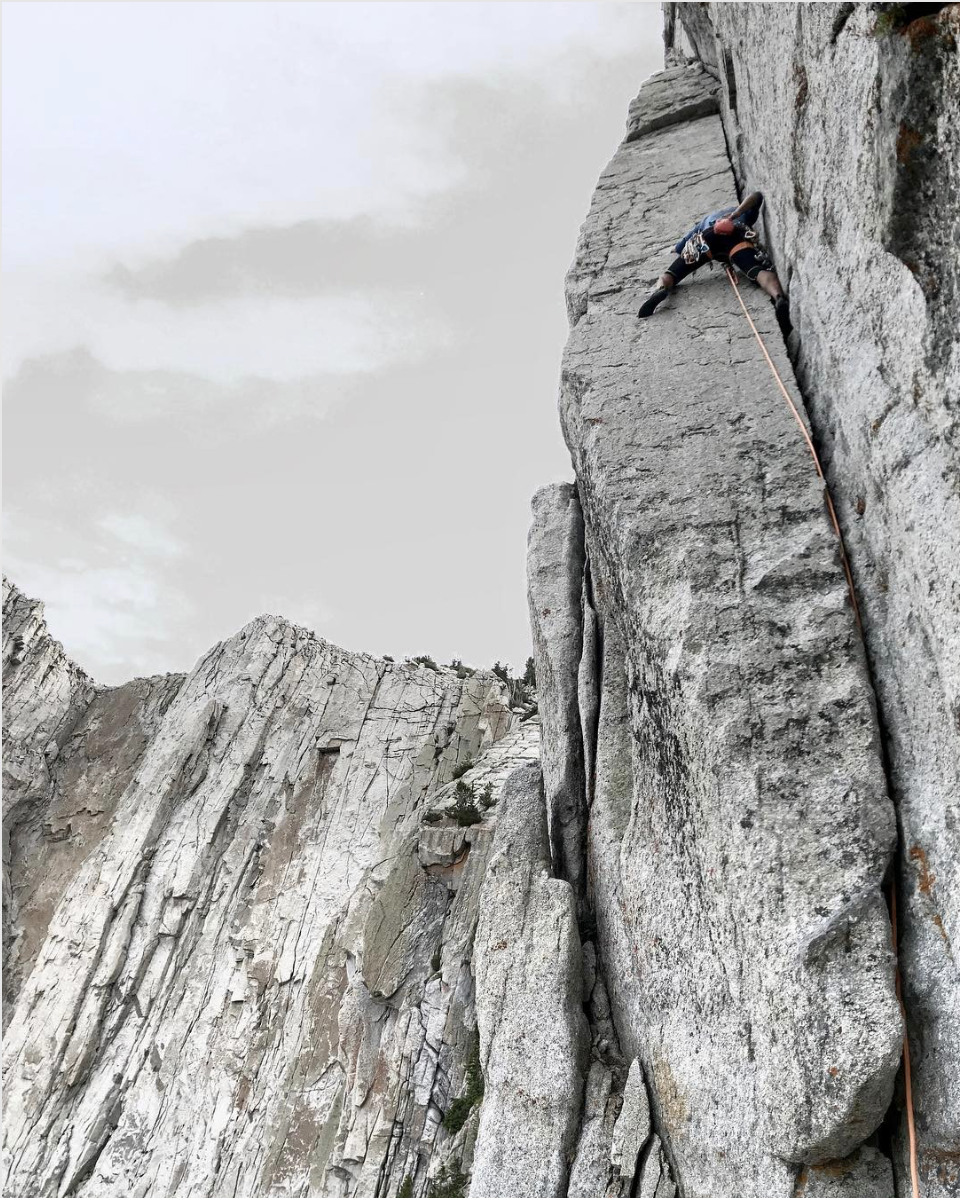 My not placing any pro lets Jason use both hands for photos ;-)

I’ve been going to the Outdoor Retailer Trade Show in Salt Lake City every summer for the past 10 years. The show—while always a great excuse to catch up with friends—is not my favorite scene, but I’ve always enjoyed the late-July days in SLC as an opportunity to explore the Wasatch Mountains a bit in the mornings. This is the last year the show will be held in SLC (it’s headed to Denver next year), and I’m a little bit bummed to not have the built-in impetus to head to the Wasatch every summer. It’s a very quality mountain range, especially considering its proximity to a large metropolitan center.

This year I cold messaged Jason Dorais to see if he’d be interested in a smash-n-grab style ascent of the uber-classic Lowe Route in the Lone Peak Cirque. As far as I can tell, this cirque is the alpine rock jewel of the range (not to mention being the highest mountain in the range, too). Last summer I’d run up for a solo of the route Open Book on the opposite Summit Wall. A fine route indeed, I particularly enjoyed the splitter handjams and exit directly onto the summit of Lone Peak. The whole time, however, I couldn’t help but be looking across the cirque and salivating at the sheer Question Mark Wall; I vowed to come back with a partner.

While Jason and I had never met before, let alone climbed together, I knew that we had a similar mindset in the mountains—no dicking around, move light and fast—and assumed, given his impressive and prolific ski mountaineering exploits, that we’d have a similarly aligned tolerance for risk. After some typical injury-waffling on my part (my right foot was acting up), I decided the route was good enough to risk aggravating my foot for, and we agreed upon a 6am meet/departure from the Jacob’s Ladder trailhead. I was happy to sleep up there in my truck the night before, the better for getting out of the valley’s pounding heat.

At the trailhead in the morning we decided on a single rack from yellow C3 to #2 with 2×0.3, 2×0.5, and 2×0.75. Our plan was to simul the three standard pitches in one long pitch (the extra cams were a hedge for my onsighting abilities), so we were using a 30m rope and two Petzl MicroTraxions.

It’s a nearly 6mi and 5000′ approach to the cirque, so we tried to make quick time of this, running the flats and hiking the steeps hard, despite our ~10lb packs. We both used poles on the steep stuff, and this was very worthwhile, especially since 1) there is a very extended steep section on the approach with somewhat poor footing, 2) the nature of the route is such that we could leave everything at the base (even our La Sportiva Mutant running shoes!) and just climb the route without packs like we were at a roadside crag. Almost all of the alpine rock routes I’ve done in Rocky Mt National Park work better if you just carry everything over the top of the climb, so this was a real treat and made trekking poles a no-brainer. 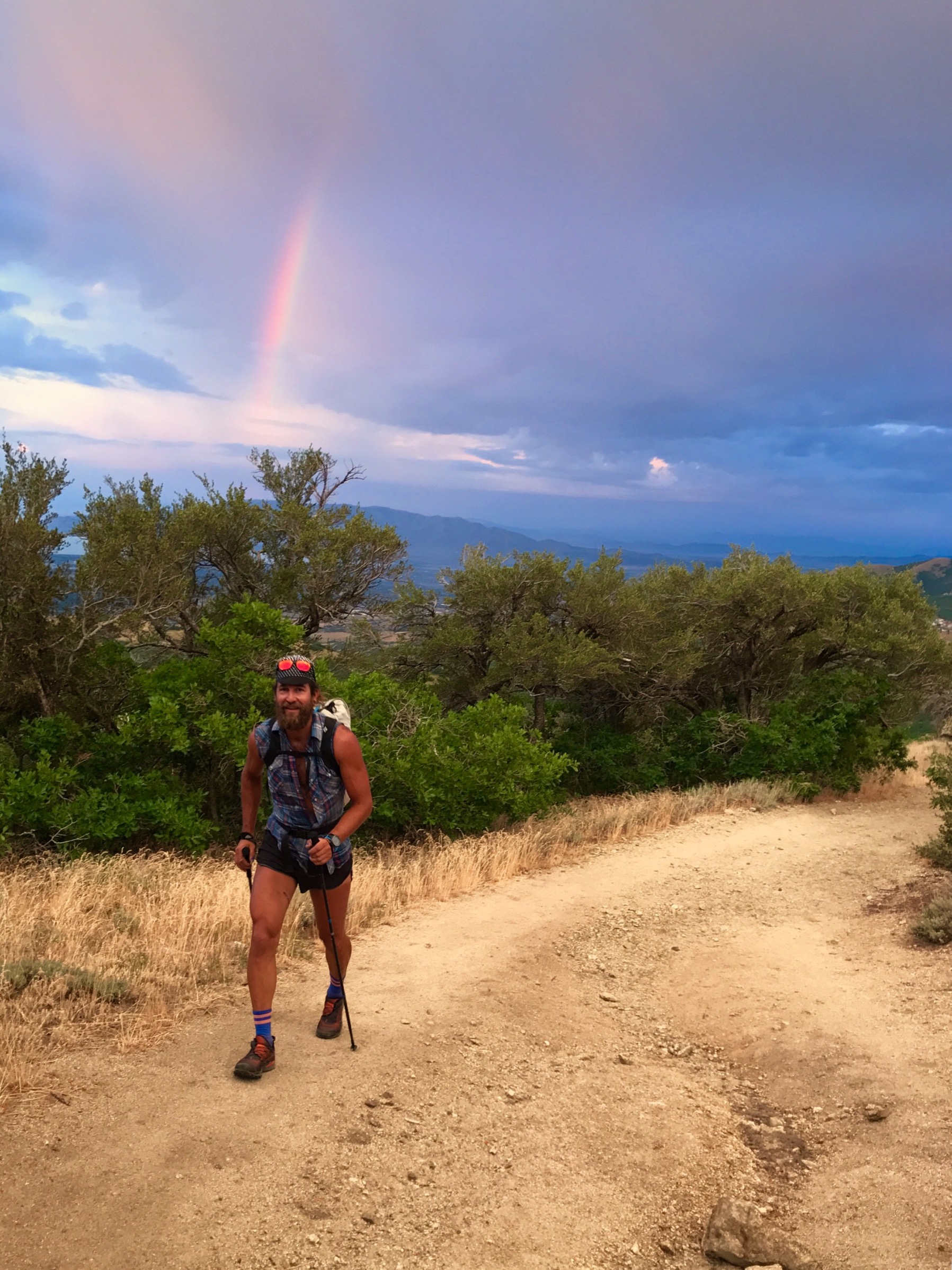 Saving my foot, using those sticks on the approach. That rainbow though! Photo: Jason Dorais.

As we headed up, the clouds that had been hanging around all morning dripped a little bit, but not enough to actually make the rock wet. Instead it was just really humid. We got to the base of the Pete’s Staircase scramble at 1h49, which I think was only a few minutes slower than I’d done it last year with only climbing shoes and a chalk bag on my back. Jason is clearly fit. 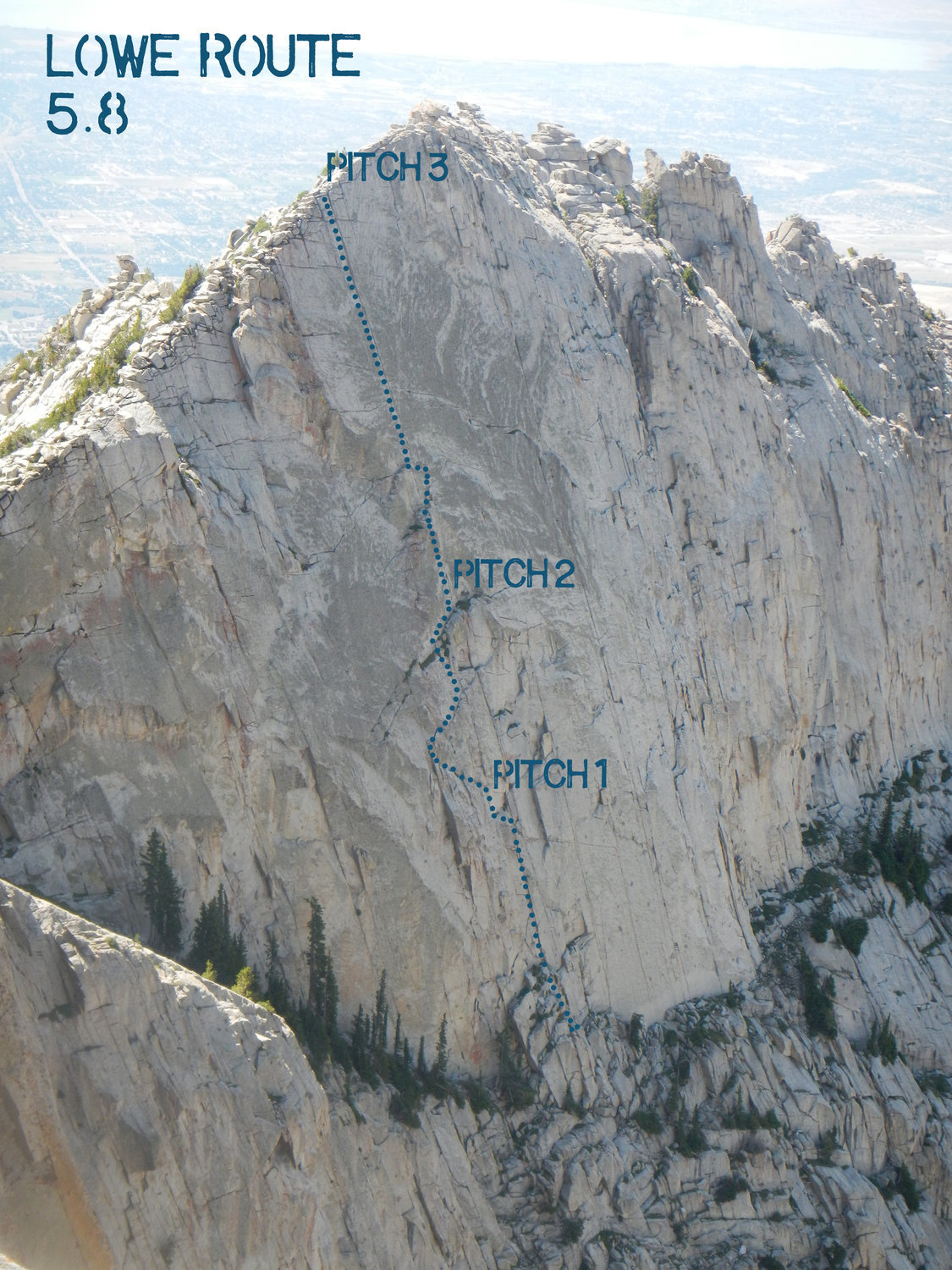 Photo: mountainproject.com. Easy to see why this is considered the Wasatch’s Diamond. (And I’d say the Lowe Route is its corresponding Casual Route—super moderate but super quality!)

We left everything on the big ledge at the base of the route by the rap anchors, then scrambled up the pillar to the brilliant opening 5.8 dihedral (see Jason’s photo at the top of the post). I led up, impressed with the quality of the climbing; I knew the route was classic, but dang! this was nice!

Good features on the face out left and bomber jams on the right made the corner feel very secure, but the face features ran out near the top and I finally threw in both of my 0.75 cams to make the exit moves. Above there I clipped a fixed bong with my first Micro and then cruised up the entire slightly wandering second pitch without placing a single piece, clipping a fixed cam near the top of the pitch when Jason had gotten to the Micro below. 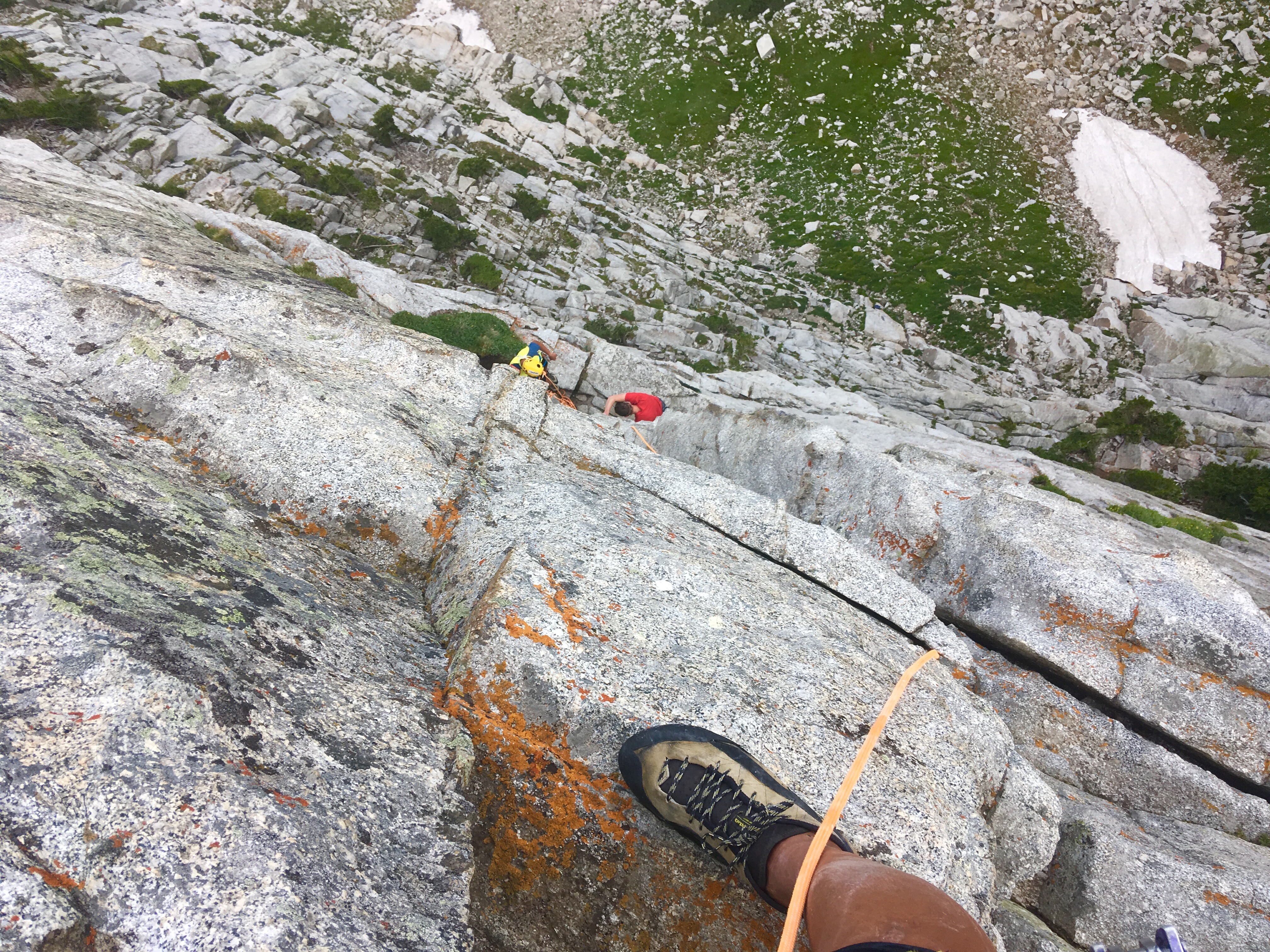 Jason topping out the first pitch, me in the middle of P2. The fellow in the red shirt is soloing.

The third pitch started with what, to me, felt like maybe the crux for the route. A couple of face moves (pinching/crimping always feels less secure to my weak fingers than jamming) led to a thin finger crack where I placed a 0.3 and then a perfect #2 slot above there. After that it was a few dozen more feet of easier terrain before the incredible final section. This headwall is completely clean without ledges, but has a pair of thin cracks splitting the just-barely-off-vertical face littered with a seemingly infinite amount of positive holds. 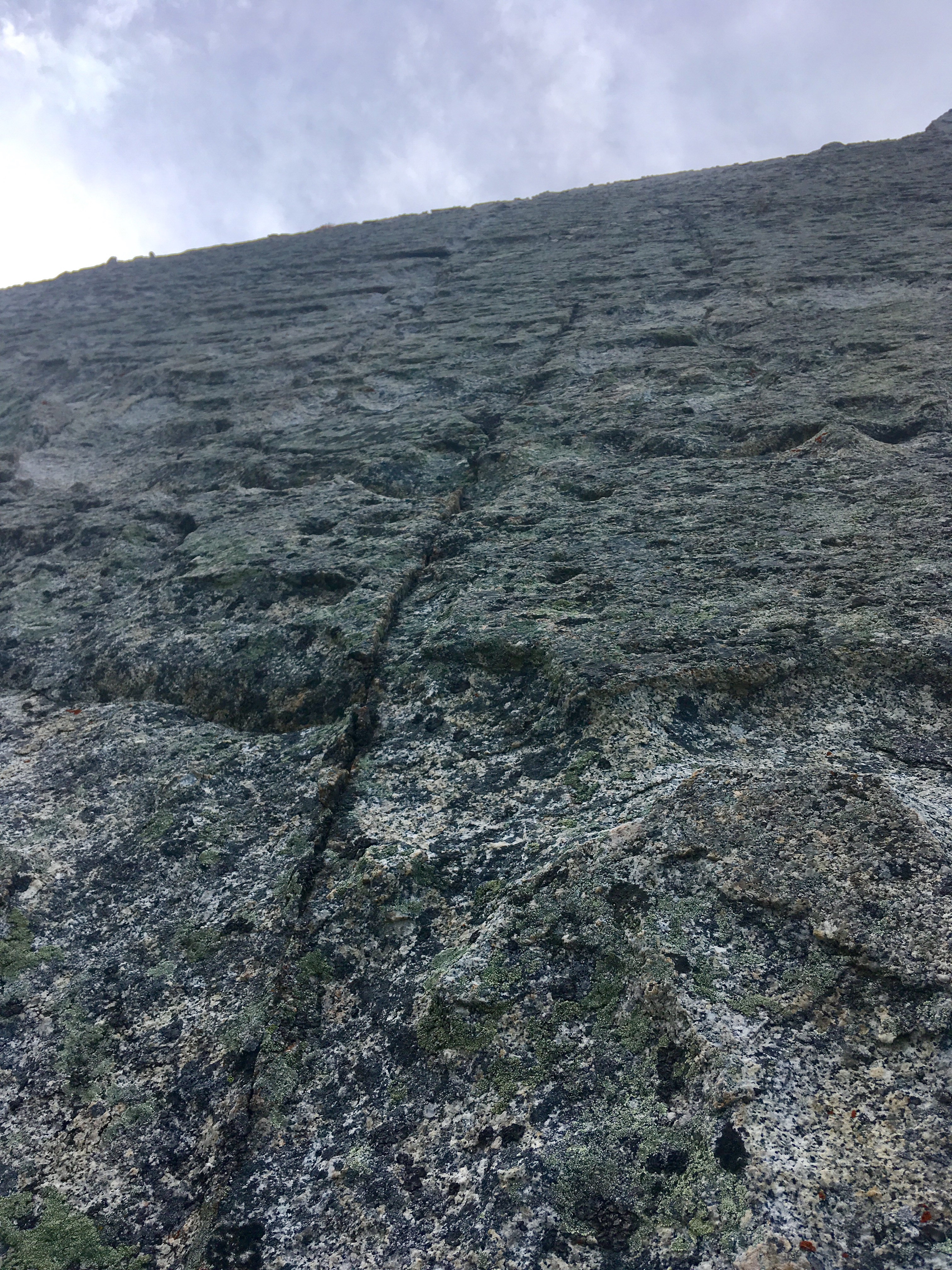 The exquisite, featured headwall terrain. An open sea of micro-jugs.

To me, the left crack felt better (offering actual pro opportunities, the right being more shallow and flared). The breathtaking position (exposure!) was countered with all the face features and it was a pleasurable and unique romp to the top. For sure, that last section would feel like the crux to me if soloing. Obviously not technically difficult, but it’s face climbing and very sustained and exposed! 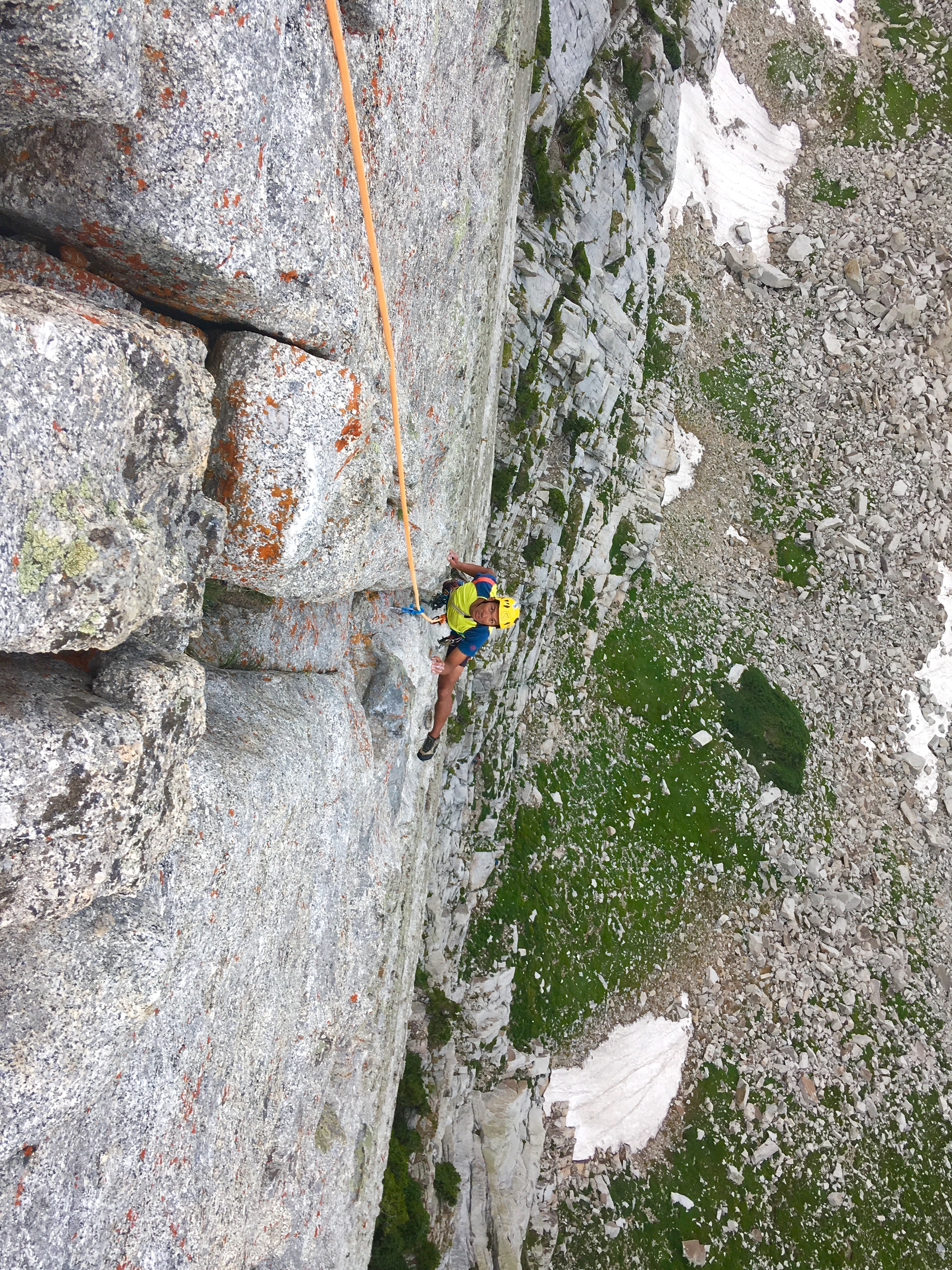 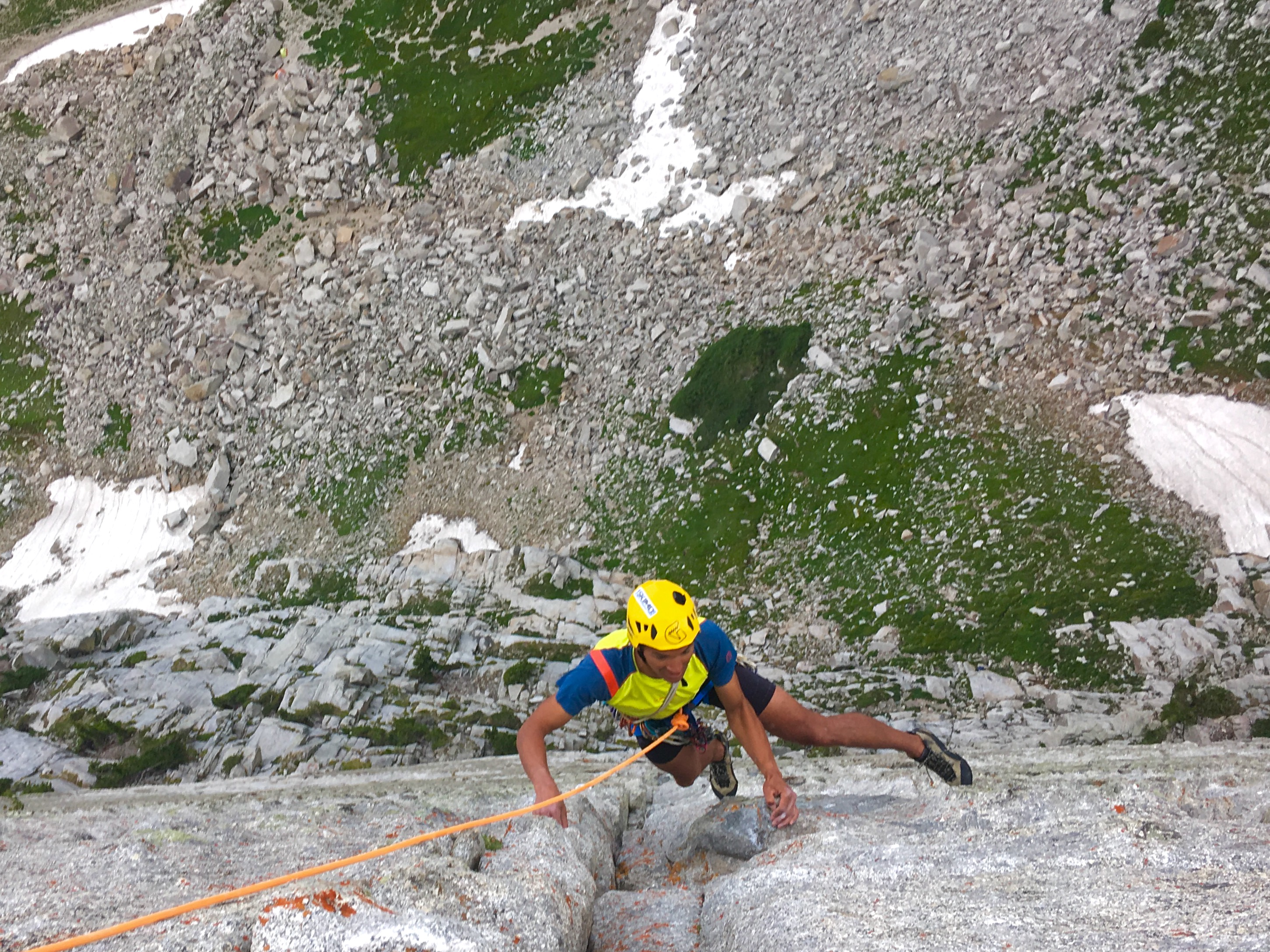 Jason on the final headwall. So fun!

I had only a single cam left at the top to belay Jason, but it was bomber and Jason was solid; base to summit had taken us 45min. On the hike/walk-off back down Pete’s Staircase in our TC Pros, Jason and I commented how fun it is when an alpine outing like this goes off perfectly without a hitch. Back at the base we rounded up our packs and were soon running back down the mountain, both regretting that we didn’t have more time for A) another lap on the LR or, B) a slightly heartier rack for a lap on the equally classic Triple Overhangs over on the Summit Wall.

About half-way down the hill we descended into a refreshingly cold and breezy layer of clouds that would intermittently rain on us the rest of the way back to the car. The only downer was that with about two miles to go my foot finally started its expected protestations and we were forced to hike. No matter, it was still a magnificent outing; I’ll definitely be back and looking to link-up a few routes.