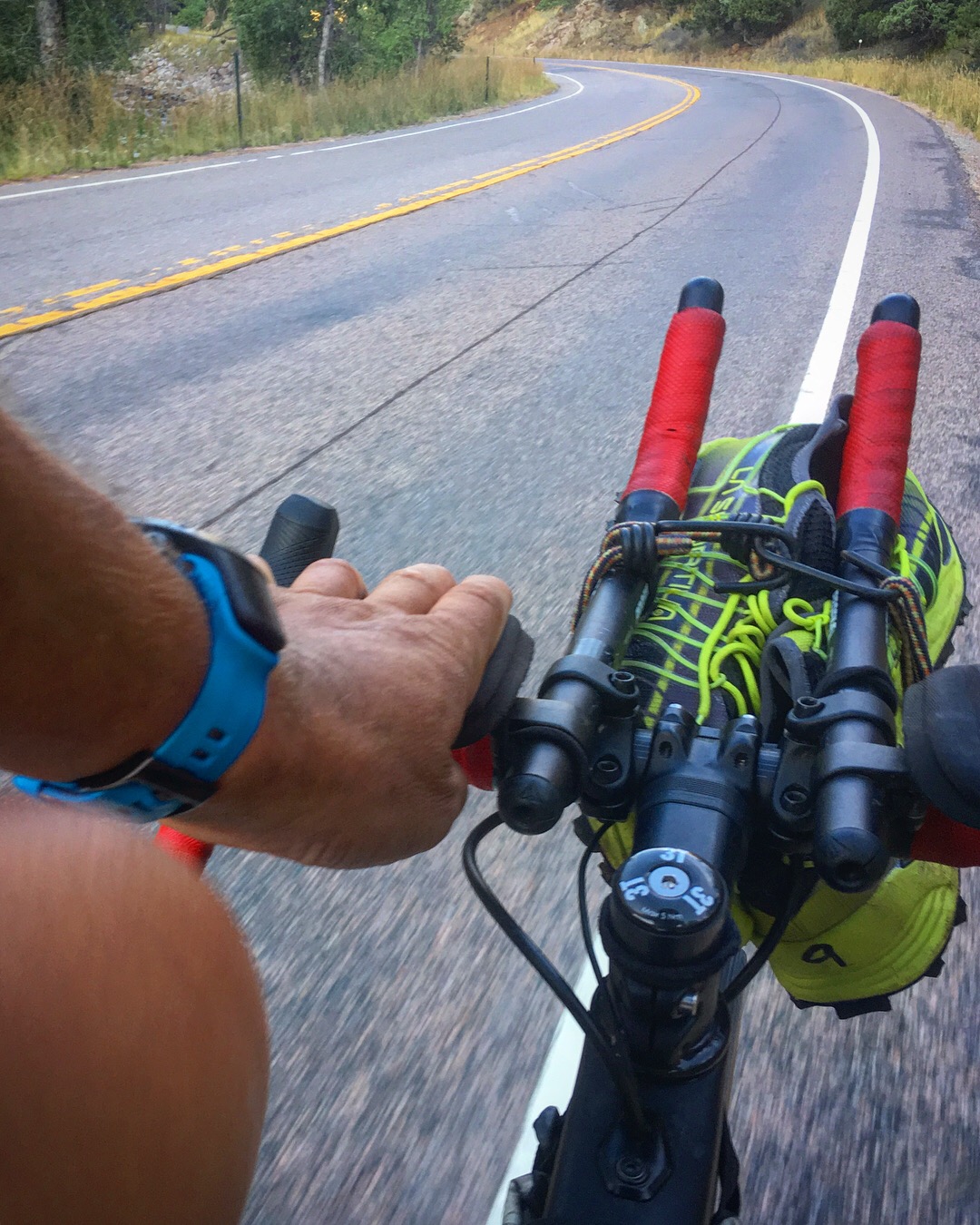 Today is the last day of the year, and tomorrow–the first day of 2019–I’ll be part of a roundtable discussion on the FKT Podcast designed to wrap up the year in FKT’s. Of course, this made me reflect on a couple of things:

One, I’m part of the panel of people who pick the FKT Of the Year (FKTOY), and as part of that process I was reminded that I actually set an FKT this year–the Longs Peak Duathlon.

Two, in my thinking about the most impressive/interesting/preeminent FKT performances this year I found myself weighing the importance of pure performance vs. creativity/style. This made me recall some Nolan’s 14 efforts from the final week in June and some thoughts I had started sketching out then, inspired by these efforts. I hope to finish that post later this week.

In the meantime, merely as a means of putting this someplace other than Strava, below is the unedited description/trip report I wrote on Strava the day I did the Duathlon back in September, followed by a few current thoughts.

God this was hard. 110mi day before yesterday didn’t help. Nor the pair of long runs this week. Completely negligent fueling/hydration strategy further screwed things. Also, windy! Doing these things solo is legitimately tougher (no drafting). Finally, 47mm x 650b tires…just laziness there. I do think they slowed things down a bit, though.

The question mark is because I’m not sure where Neal and Kevin started/stopped their watches. I seem to remember Peter saying Old Chicagos…which would make this effort frustratingly similar to their original 7h28m. [EDIT: Neal and Kevin did indeed start and finish at the Bustop, like I did.]

Bike up seemed ok except for some serious headwinds in the Allenspark area. Typical, I guess. It was just slow, though. I did have a 4min port-a-pottie break in Lyons, so that didn’t help. I would’ve liked to have been 10min faster. Don’t need to carry all that water, that’s for sure.

Run up started out rough. I was tired off the bike. Just not an Olympic day. Very average to below-average. I always thought sub-7hr on this was logical and almost a gimme, but not when you’re too slow like I was today, haha. Never had a good groove on the uphill, just ground it out. Quite windy above treeline and a not inconsiderable dusting of snow on the north face. 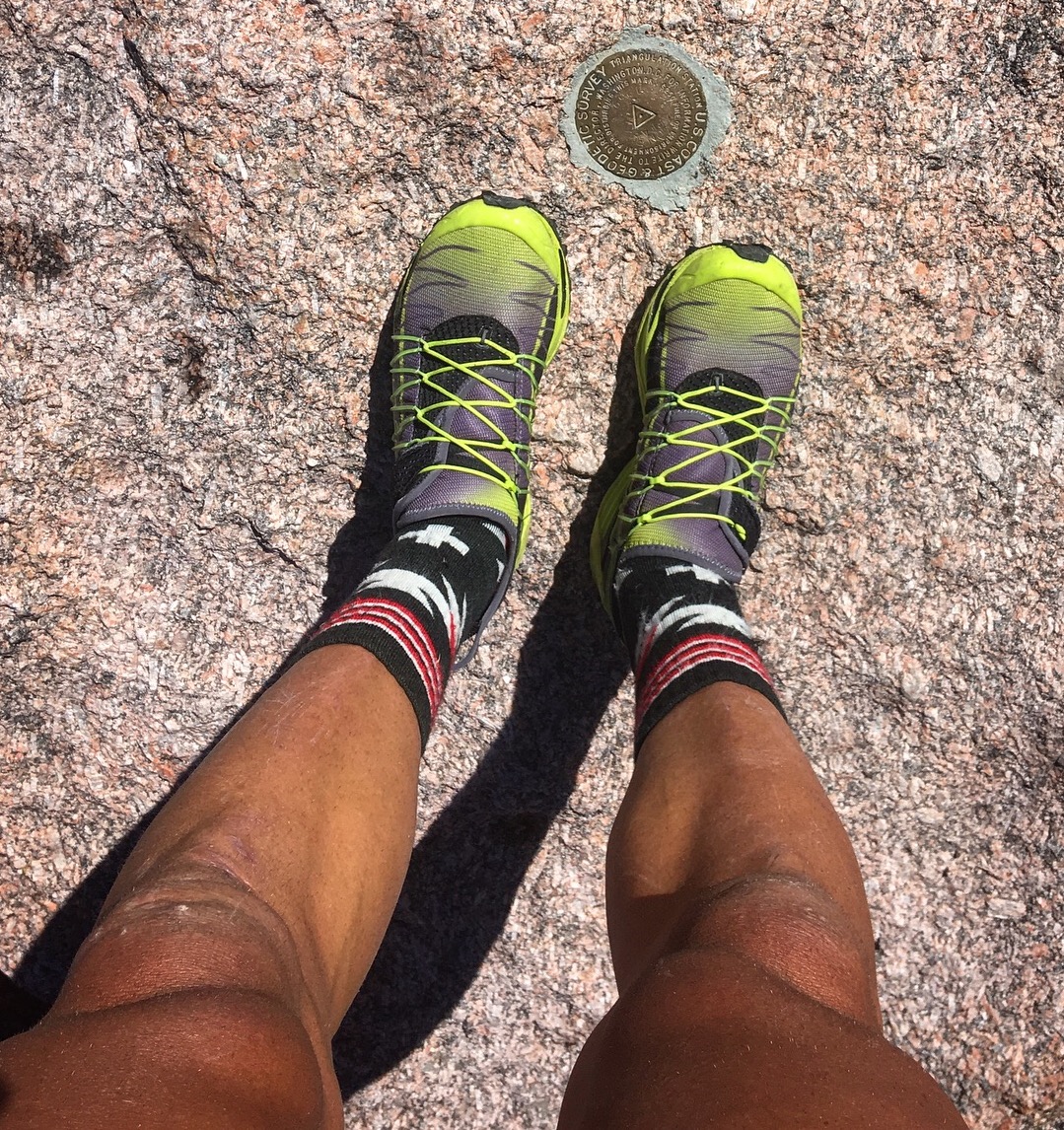 On the summit I was a bit unmotivated by my slow uphill, so I took a couple pics and then started down after :45sec. Definitely didn’t wingsuit the downhill. My failure to bring water or calories was a huge mistake. I forgot that it’s not just a 2hr effort, it’s a high intensity 2hr effort in the middle of a high intensity 7hr effort. The extra intensity really increases the caloric need. As such, I was basically bonking the whole downhill (I’d eaten a Clif Bar at the trailhead). I had a decent groove but pretty low motivation; I was just tired and bonky and didn’t want to take any risks with catching a toe. So was pretty conservative on the downhill. Did drink water from a pothole in the boulder field, lost probably 30sec there.

The bike back started out horribly. I’d chugged water at the trailhead faucet and ate another Clif bar but failed to fill any bottles so embarked on the bike with about 20oz of water to get home. Ugh.

I nearly gave up on the bike home. I’ve never felt so rough biking home from Longs (I guess this is only the 4th time I’ve done it). Allenspark hill was a crawl. I nearly decided to just soft-pedal it. Regained a little pep on the SSV downhill but I was out of water and the sun was out. Blah blah. Finished fucking worked. Mostly just dehydrated. And a headwind from Lyons to the finish! (And of course the typical canyon headwind, too.)

Now, almost four months later, I have a couple takeaways.

One, I wasn’t pleased with this performance, as evidenced by the annoying self-deprecation-bordering-on-humblebragging going on in that description. But sometimes you just have to go for things. The perfect moment rarely occurs; if you’re always waffling and finding reasons to not do something worthwhile, you’ll never do anything.

Two, looking back at the week leading up to this outing, my body was so unpredictable. A few days earlier, I’d bailed on a run after only two miles, concerned about my achilles tendon. The very next day I did a 20 mile run with considerable vert and scrambling. So, in retrospect, I’m simply grateful my body cooperated enough on the day to get this done.

Finally, I now have the FKT’s on three out of the four Longs Peak multi-sport options: Summer Duathlon, Winter Duathlon, Summer Triathlon (w/ Stefan Griebel). That leaves one final possibility–Winter Triathlon. I’m not sure any team has ever climbed the Diamond from Boulder in winter with a bike approach and egress . Certainly, doing so unsupported would be a truly heinous endeavor. Always things left undone.