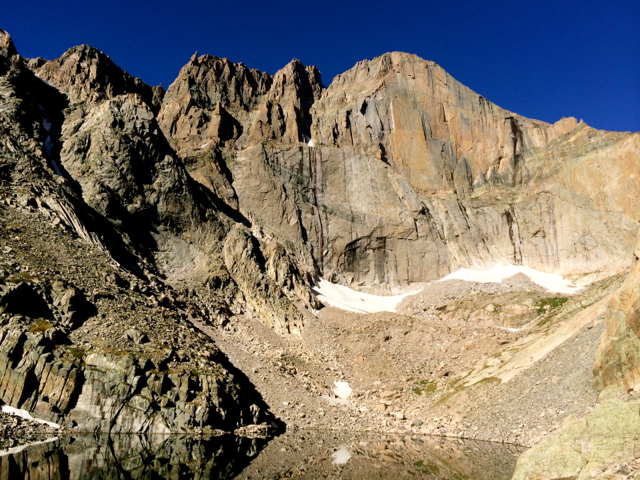 There is a long tradition in Boulder of ascending Longs Peak from town using only human power. Specifically, biking the ~40mi to the trailhead instead of driving; running and climbing the mountain; and then reversing it all back to town. I’m sure it probably happened sooner, but the earliest such activity that I have found documented is Bill Briggs’ 1974 15hr roundtrip of the Kieners Route (per this nice little column in the Daily Camera a few years ago).

The “triathlon” description of the endeavor soon developed, denoting summiting the peak via its technical East Face through a combination of biking, running/hiking, and climbing. This quickly came to mean actually climbing the Diamond, typically via its easiest route—the 5.10a Casual Route—but somewhere along the way, perhaps as both an homage to Briggs’ initial effort and also a softening of standards so as to include slightly more normal humans, the requirement for the Triathlon required simply the ascent of a 5th Class route. This makes Kieners the obvious line, as it ascends the East Face—albeit only flirting with the real difficulties of the Diamond—and has perhaps a couple hundred feet of 5th Class scrambling. (There are plenty of other low-5th Class ascent routes on the peak, but Kieners is the only one on the East Face.)

In the ensuing 40+ years there have been many an impressive effort in the Longs Peak Triathlon. Bill eventually shaved his 15hr time on Kieners down to the record of 9h52m (though this was timed from his house in Boulder, not the Bustop—as per the Camera article, he estimates a time of 9h40 from the Bustop).

Bill’s brother, Roger, established probably the most outstanding mark in 1991 when he biked to the trailhead, ran up to the East Face, and then free-soloed the Casual Route, arriving at the summit of the mountain a mere 5h45m after leaving Boulder. Wow! Unfortunately, there is no mention of him completing the return leg of the journey with any kind of focused effort or intention.

In 2012, Stefan Griebel and Jason Wells established the roundtrip mark for the LPT, biking to Longs, climbing the Casual Route, and returning in 9h50m. With Brady Robinson, Wells also holds the maybe even more impressive unsupported (i.e., carrying all their climbing/hiking equipment themselves from Boulder to Longs and back) Casual Route LPT time standard of 16 and 1/2 hours.

The starting/finishing spot for these efforts has become the Bustop parking lot/the stoplight at the junction of Broadway and Highway 36 in north Boulder. This is for simple logistical reasons—the parking lot is a convenient meeting/staging area, and this junction is the last stoplight as you leave/enter town.

Even before I took up biking with real consistency and seriousness this spring, the Triathlon was something that I knew I wanted to do. Once biking became my main (only) form of endurance activity this summer, I knew I had to give it a go once my shin was healthy enough to get up and down the peak on my own two feet.

My shin finally reached that level of integrity a couple of weeks ago, so on Friday, August 14th, I set out to see what I could do, despite almost no on-my-own-two-feet cardio training and only two trips to 14k’ so far this summer.

I left my apartment in Boulder at 5am. This seemed like the earliest time I could embark that would still let me bike at full speed without a powerful headlight. It ended up being just about perfect as the eastern sky gradually lightened on my ride up Highway 36 to Lyons. Along the way, I had passed the Bustop at 5:14am.

The ride up South St Vrain Canyon went quite well. Really the only extra weight I was carrying as compared to a typical road ride was the pair of running shoes strapped to my handlebars and a couple of extra Clif Bars as I wouldn’t be stopping at any coffeeshops, which usually provide my mid-ride fuel. I will say the last five miles or so to the trailhead dragged on a little bit, but I think I was just excited to get off the bike and head up my favorite mountain for the first time all summer.

I reached the ranger station in 2h39 from the Bustop in Boulder, but was immediately chagrined to find that the water hydrant at the trailhead is no longer turned on. What the heck?! This source of water had been a big part of my hydration strategy for the day, but I didn’t waste too much time worrying about it and tried to be efficient in my transition—changing into running shoes, stripping off bike shorts (I was wearing running shorts underneath) and helmet, scarfing a Clif Bar, and stashing everything behind the Ranger Station.

Sitting here writing this, I can’t understand how any of that should take more than two or three minutes, but it took me 12min, and in the subsequent bike to summit outings I’ve done since this, that 10-15min transition has proven to be the norm for me. I’ll admit, I am quite particular with my shoelaces.

I took off running from the trailhead and after about two steps, this actually felt glorious. I have done very little (as in, almost zero) running all summer and as a result the pure kinesthetics of it are still very exciting and alluring for me. The good news for my shin, however, is that the established shortcuts I take up through the woods are steep enough that hiking is even more efficient, so the running was very short-lived.

Near tree-line I stopped for a minute or two to drink from a spring due to the lack of trailhead water, and then, getting sucked into thinking I was being clever and efficient, tried to take another shortcut through the willows and krummholz and wound up actually losing quite a bit of time wallowing around here before I finally cleared the vegetation and was truly above treeline.

My energy and psyche stayed great all the way around Chasm Lake and to the scramble adjacent to Lambslide despite approaching 13k’ in elevation. Certainly the crux of the day would be the crossing of Lambslide at the Broadway Ledge level, so I was very curious to see what the snow conditions were like. Armed with a pair of pick-like rocks, I crawled down to the edge of the permanent snowfield and was delighted to find near-perfect conditions at 9:30am—soft enough to kick steps and securely make my way across. This is quite unusual for this late in the summer—typically the snow has melted down to rock-hard alpine ice by mid-August—so I was very pleased. 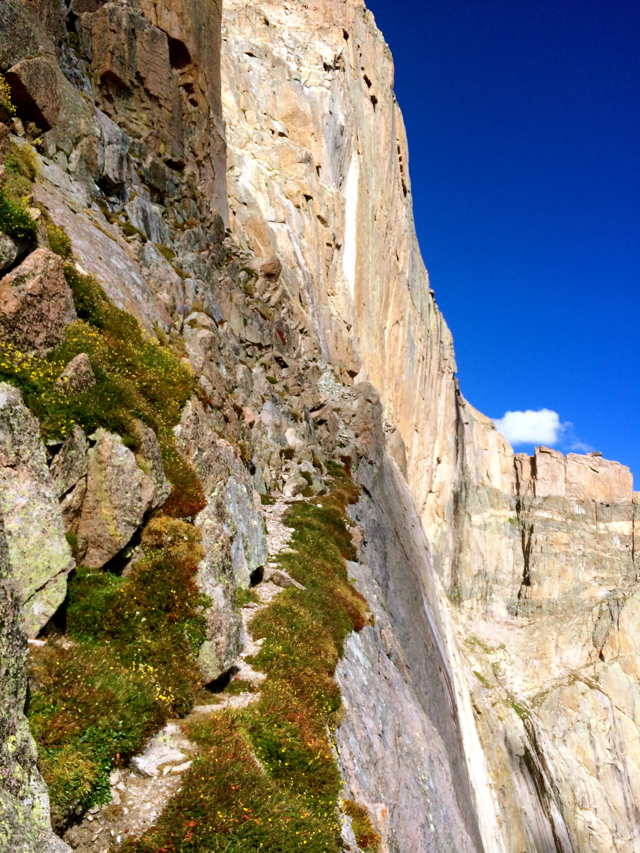 Broadway itself is an exhilarating place that requires attention and care but has no real technical difficulties. At the base of the Notch couloir I again stopped to try and tank up on water, and then I launched up the Kieners route proper, scrambling up beautiful cracks, chimneys, flakes, and ledges through a few hundred feet of 4th and low-5th Class terrain before popping out onto the 3rd/4th Class grunt of upper Kieners.

These last few hundred feet of vertical are almost always difficult for me, but today, with my lack of acclimation and, I suppose, the bike ride in my legs, I felt like I was moving excruciatingly slowly. My splits bore this out as I was on pace for a 1h45 or so ascent at the base of the Notch, but then ended up taking 2h04 from the trailhead to reach the summit.

Even with my slow ascent, I knew I was easily on pace to best Briggs’ 9h40 time standard, so I wasted no time on top, taking only 90sec to sign the register and catch my breath before taking off down the North Face/Cables descent. As is typically the case, once I had gravity working in my favor I actually felt great, and the descent went by in a blur of me trying to activate my very rusty downhill running/boulder-hopping skills. I cut down to the Jim Grove trail and then the usual shortcuts below treeline and finally arrived back at the trailhead after a :52 descent for a 2h58 roundtrip. Granted, this is my slowest non-winter Kieners time ever, but I was happy to at least squeak in under 3hr.

The transition took another 11min where I scarfed another Clif Bar (I’d taken a gel on the run itself) and then desperately asked the ranger where the nearest water faucet was. He offered to sell me water for $1 a bottle, but I politely declined and instead mounted my rig and started pedaling furiously back to Boulder.

Mercifully, within minutes of getting back on the bike, it actually started raining, which, while definitely cooling, did nothing to slake my thirst. It ended up being nothing but a short but intense cloudburst. I finally got water at Allenspark, chugging a bottle and then refilling, and then battled typical afternoon headwinds all the way down the canyon and then on the rolling final miles from Lyons back into Boulder.

I was really going for it the last 10mi or so into Boulder, bearing down, pedaling hard, and it was a total blast. While I’ve certainly ridden my bike a lot this summer, I’ve never gone particularly hard on it, despite grinding my way up plenty of steep grades. This was different; here I was externally motivated by the clock and pushing myself in that way was something I’d really missed over the last few months of injury. There’s something ineffably gratifying about really going for it.

It was definitely satisfying to join a tradition carried by so many people that I’ve looked up to in the mountains over the years, not to mention the fact that my shin was actually letting me even engage in this type of silliness once again. But, it has to be said, with some actual running and altitude in my routine, and a little more efficiency in my transitions, I think it could go quite a bit faster.

The steed, back at my apartment in Boulder.