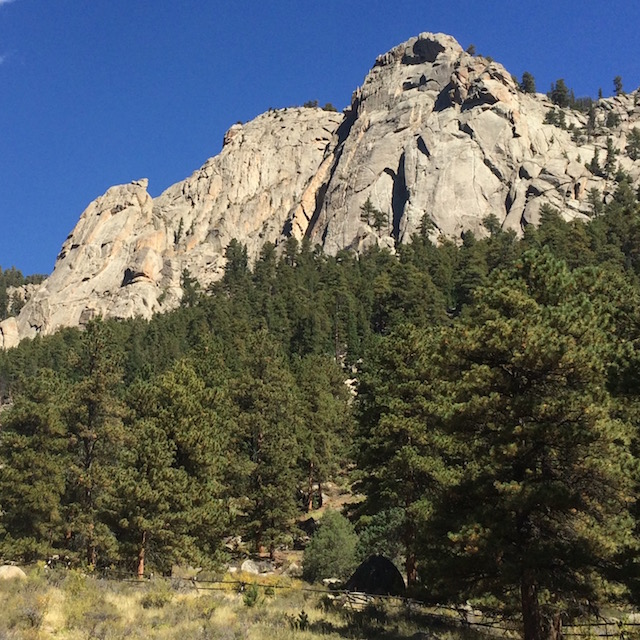 The Book (right) and Bookmark (left).

I’ve only climbed at Lumpy three times previously, but each time involved (along with other routes) a lap of both Melvin’s Wheel on The Bookmark and White Whale on Left Book, so when I was perusing the way, way, embarrassingly far back posts on Kelly Cordes’ website earlier this summer, his reminiscing of the “Triple Schmack Challenge” caught my attention. This was just a fun little link-up of some of the super duper classic moderates at Lumpy—the aforementioned two climbs, plus Pear Buttress on The Book—but is exactly the kind of thing that gets me excited.

Now that things are starting to cool off a little again, Lumpy is coming back into season, so I decided to head up there yesterday and finally link these three routes together. I also wanted to test out a bike bag for a little tour I have planned later this fall, so I strapped my La Sportiva Helios SR to my handlebars, stuffed my AK Mountain Vest, TC Pro rock shoes, and chalk bag in my Oveja Negra seat bag, and got a pre-dawn start pedaling through the dark streets. Might as well use that 3am jet lag insomnia for some good.

The ride up was very pleasant. I’d biked to Lumpy a couple of times back in June and both occasions were seriously stressful on my IT bands, so it was nice to make the ride up to Estes today with only slight murmurings from my knees. Also, after a summer of pedaling around on my lower geared, 23lb, steel-framed Reeb gravel grinder, it was an absolute joy to zip along on my 16lb carbon rig. Dang, road riding is fun! The This American Life episode in my ear buds about the travails of Afghan refugees in Greece made my achey head and knee seem pretty inconsequential, too.

The quick final drop into Estes froze my hands at 8am, but by time I’d pedaled the extra couple miles over to the Lumpy Ridge trailhead (exactly 38mi from my doorstep) the sun was fully out and I was plenty warm. Stashed my bike, changed into my running shoes, packed my rock shoes and chalk bag into my vest, and I was off. 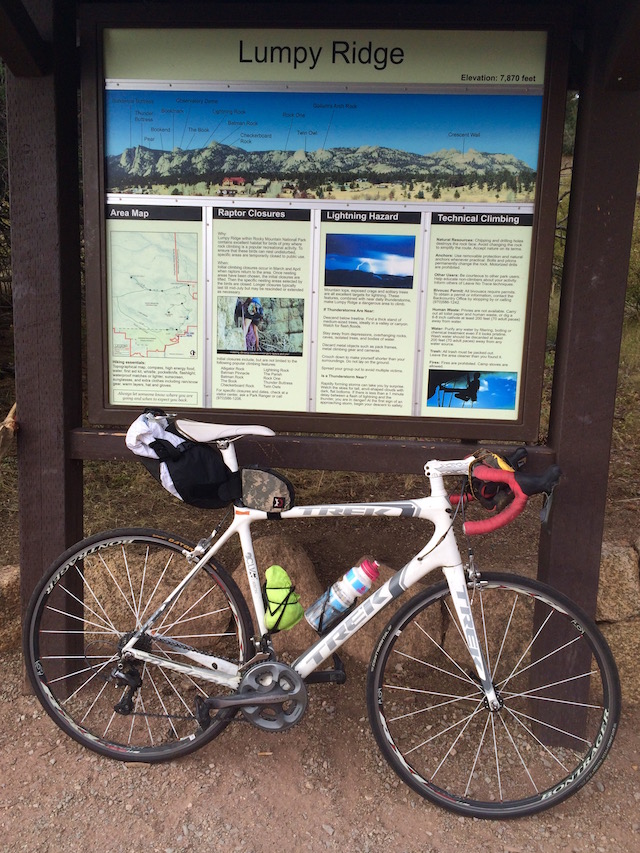 The loaded rig. Shoes on the handlebars. Everything else in the seat bag.

Ohh, running feels awkward! Part of it was the bike ride, part of it was that I’ve only been running maybe once or twice per week all summer long because of these IT bands. After a few minutes my body semi-remembered the mechanics, though, and it was a real joy to be cruising along the carpet path in the morning sun, headed for my first objective—Pear Buttress on The Book.

My buddy Mauricio and I had climbed this route three full months ago, back in early June, and I think I led the whole thing. At the time, I remembered there being a couple of surprisingly tricky sections, but I’ve grown much more comfortable at the grade over the course of the summer, and now I was equipped with the secret weapon of crack climbing—TC Pros.

The opening slab moves to the lieback flake felt super solid, and then a quick righthand bump got me through the twin cracks crux at the top of the flake. After deliberating about the lower traverse on the second pitch I ultimately went with the higher one and it felt good—stick your butt out and trust you feet while crimping on a relatively positive rail.

Pitch Three is what makes this route classic (though I think the opening lieback on P1 is equally quality), and I was psyched to get on it—a splitter finger crack. This is where foot jamming with the TC Pros made all the difference in the world, transforming the crack from pretty tense to almost casual. So much fun! 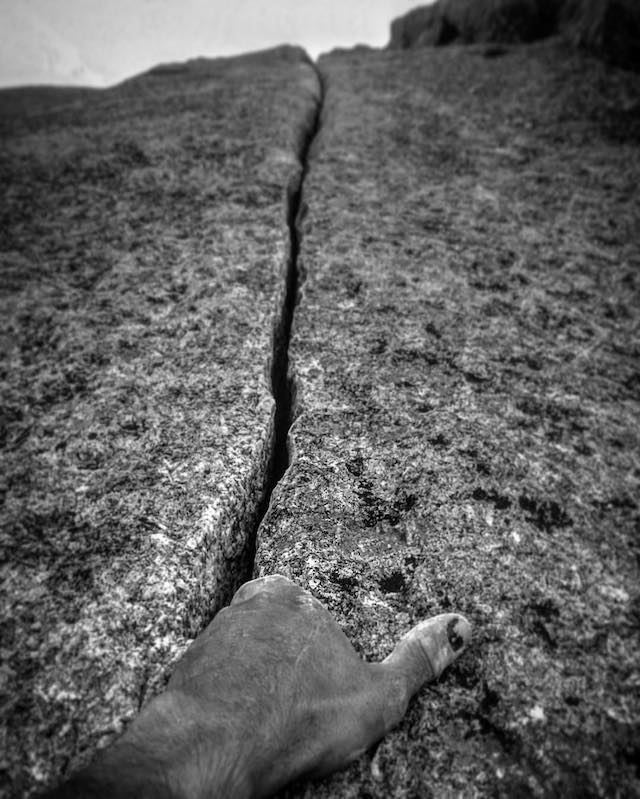 After the scrambly fourth pitch, the final pitch to the top presented me with an option: the notorious Cave Exit or the Hurley (hand) Traverse to the right. When I’d climbed this in June I led the Cave Exit roof and found it very similar to the equally notorious Cozyhang A-roof on the Dome here in Boulder Canyon—extremely beta-intensive and awkward if you don’t know what to do, but worthy of its 5.7ish rating once the moves are sussed.

Today, I stepped up into the roof, remembering that I did some pretty extreme stemming before getting to a giant jug, but after a few moments I became impatient with making it all feel secure without a rope and backed off to instead onsight the also-5.7 traverse. I’m glad I did, because it was super fun and, I think, equally classic. 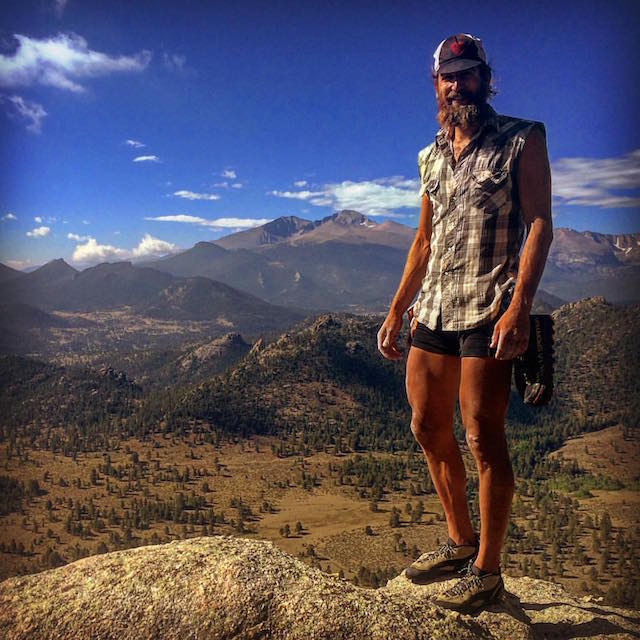 Summit of Pear Buttress on The Book.

On top, I changed back into my running shoes and after a little route-finding on the eastern descent was back at the base of the route 10min after leaving the summit (took me 27min to climb the route, with lots of deliberating).

The Bookmark is the next formation just to the west; the base of Melvin’s Wheel was only a few minute’s jog away. Having climbed this route three times—the last two times of which Mauricio and I simuled—it was quite a bit more familiar to me than PB, so I went in feeling confident, especially since I knew the flared P2 fingercrack was going to feel way better now in my new footwear than in the soft slippers I’d worn the previous times I’d climbed it. 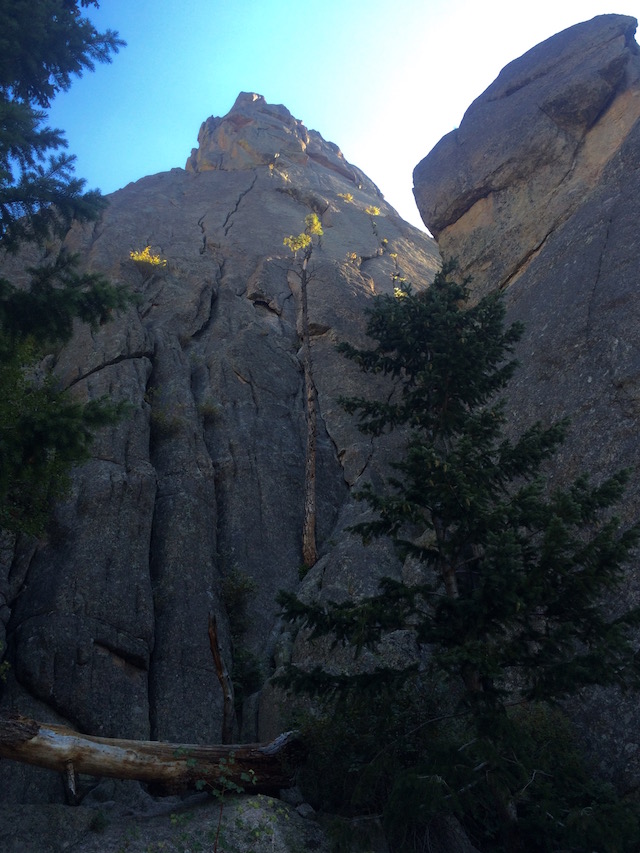 The Bookmark. Melvin’s Wheel goes basically right up the middle behind the tall, skinny tree.

The first pitch on this route goes super quickly—5min today—as it’s mostly romp-y 5.7 crack climbing with only a couple of 5.8 moves to surmount a roof near the top of the pitch. To my surprise, the P2 finger crack felt even better than Pear Buttress’s—despite being of the classic Lumpy flared variety—and then P3 went equally smoothly as I climbed the nubs and cracks on the outside of the off-width chimney that defines this pitch. 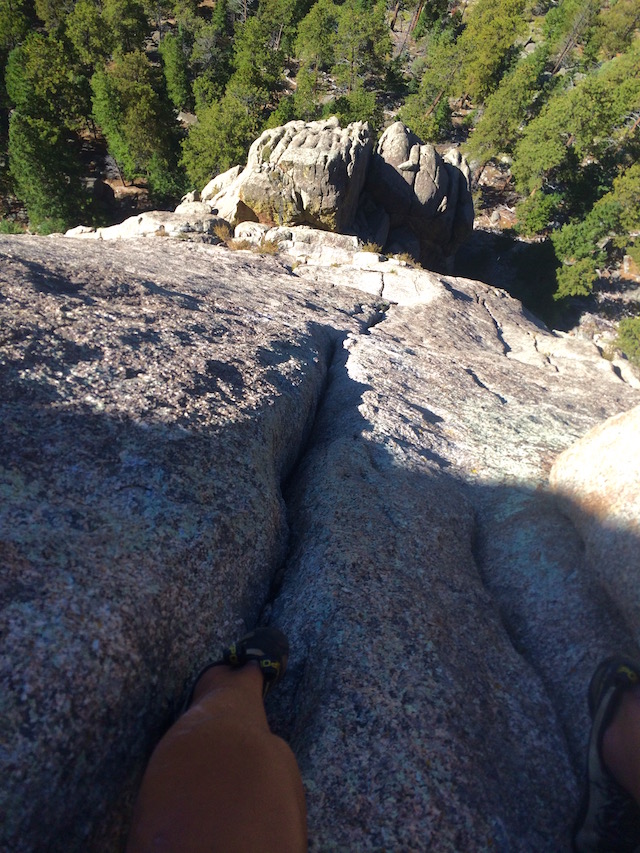 At the top of Melvin’s P2 textbook Lumpy-flared finger-to-hands crack.

Once on the summit, I knew the real challenge lay before me as I’d always rappelled off the back previously and just assumed there was a reasonable downclimb since people obviously linked these routes solo. It took me a while (13min actually, to get from the summit to the base of White Whale, when Melvin’s itself only took me 15min to climb), but I eventually found a secure route down and look forward to going back and doing it much more quickly now that I know the beta.

The final route—White Whale on Left Book—is a slabby, super fun (er, soft) 5.7 that is really more of a cool-down than anything as almost every hold is a perfect finger lock and the lack of steepness is so forgiving. I dispatched of it in seven minutes, happy to now be in the shade.

For a minute I thought about questing over to the Pear formation and trying an onsight of Magical Chrome Plated Semi-Automatic Enema Syringe—a classic 5.7 over there and the logical next route in the westward link-up—but I had a headache and was losing motivation, especially as I don’t generally onsight solo stuff, especially when route finding isn’t super obvious.

The run back out (it’s only a couple miles) was nice for stretching the legs, and once I was down at Kind Coffee back in town (excellent shop) the day was so beautiful—and perhaps, the espresso so potent—that I decided to take the scenic route home up the Peak-to-Peak past Longs Peak and down South St Vrain Canyon to Lyons (I’d approached Estes via North St Vrain, which is ~13mi shorter and with a high pass about 1000’ lower). This ended up being a great decision as my knees felt solid, matching my energy and stoke levels.

There are at least three more obvious formations/routes to add to this link-up to make for a proper Tour de Lumpy (Batman, the Pear, and Sundance Buttress), and once I get on those with a rope I’m excited to come back and pull off the full enchainment.