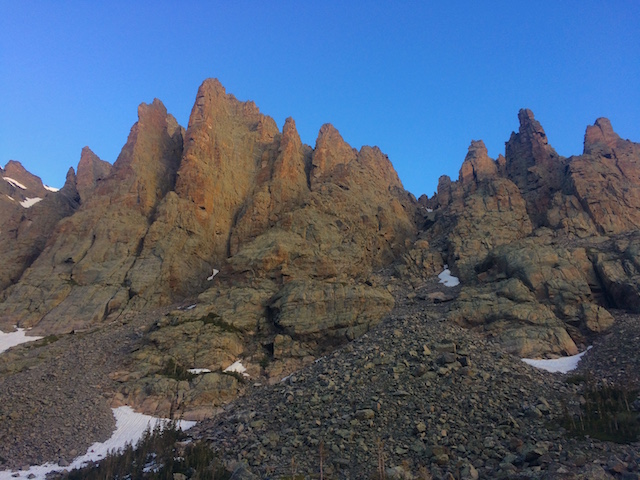 The Sky Pond cirque—tucked just beneath the Continental Divide above Loch Vale in Rocky Mountain National Park—is a spectacular place. Granite spires abound and hang improbably high above sparkling lake waters and glistening early-season snowfields. The setting feels truly alpine in the most accurate and literal interpretation of the word, i.e. it draws easy comparisons with the European Alps themselves. As a mountain enthusiast in general and a climber in particular, it’s an inspiring scene.

Stefan and I headed up there last week with the objective of climbing the three most proud pinnacles in the basin—the Saber, Petit Grepon, and Sharkstooth. Outside of a trip up the Diamond’s Casual Route last summer and a scramble of the North Ridge on Spearhead and the West Ridge on Pagoda, I’d never climbed anything alpine in Rocky Mt National Park. Stefan is super-accomplished on Longs Peak’s Diamond, and had climbed the Petit Grepon twice, but outside of that, was also similarly inexperienced in the Park’s offerings. The summer season is short and for a full-time working family man like Stefan, free weekends are even rarer. So let’s climb a bunch of stuff.

Stefan attended a wedding until midnight the night before, and I was visiting family in Colorado Springs, so a proper alpine start was out of the question. Luckily, the weather forecast for Sunday was splitter, so we met in Boulder at 4:15am and were jogging out of the Glacier Gorge Trailhead parking lot at 5:40am, which—at nearly the summer solstice—meant virtually broad daylight. Surprisingly, even at the relatively late hour, there were less than a dozen other cars in the parking lot.

Stefan is a bit of a multi-sport monster and generally just has an unbridled enthusiasm for mountain adventures. He’s a highly competent climber, holds the speed record on Eldorado Canyon’s mega-classic Naked Edge, used to hold the First Flatiron speed record, still holds the Third Flatiron speed record, is the founder (and multiple-time finisher) of the Colorado Trail bikepacking race, holds the Longs Peak Triathlon speed record via the Casual Route, and actually holds the car-to-car speed record on the Petit Grepon (an astounding 2h39m), which skills this requires would actually come into play later in the day. All this is to say that he’s not opposed to a little hot-footin’ it on what is typically considered a quite arduous approach (5mi and ~2500’ vert) back into the Sky Pond cirque. Nevermind the 3hr of sleep and the packs on our backs. 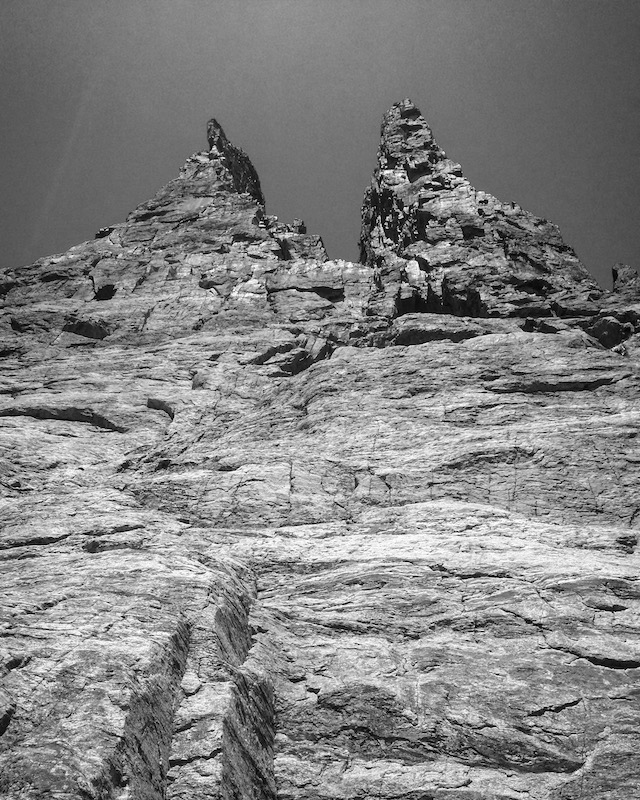 Petit Grepon (left) and The Saber.

Given our objective(s), I suppose our packs were actually relatively light. Outside of our minimal personal gear (an extra layer, a jacket, helmet, climbing shoes, harness, food and water), I supplied a 9.2x30m rope and Stefan selected a somewhat curious alpine rack—mostly a single rack plus a couple doubles in the finger sizes and these weird Omega Link cams that I’d never seen before. And not many draws.

Psyche was high on the approach in, and once in the basin we immediately identified the Saber and scrambled the three approach pitches—each in the 5.4-5.6 range—to the obvious starting ledge of our selected route—the Southwest Corner. Unfortunately, as we stepped onto the ledge, a party was already there roped up with an anchor built and the leader about to embark. We were a little bummed, but a quick look at the topo determined that we could start on the directly adjacent Kor Route and probably traverse into the SW Corner one or two pitches up.

In a couple of minutes we tied into our silly, short, single rope, I threw in a cam as an anchor and Stefan led up the starting left-facing corner. Our 100’ rope meant that we would likely spend most of the day simul-climbing, so we had hopes of moving quickly and making a pass.

When the rope came tight, I pulled my one-cam anchor, and started up the route. Alpine climbing isn’t your average day at the crag, and the first few moves on the rock reminded me of that. A pack is sort of cumbersome and kind of gets in the way, the wind is always blowing, fingers are cold, the holds aren’t chalked, loose rock is pretty much a given, things feel clunky. Soon enough, though, I warmed to the task and was feeling decent, even as a steep bulge got my attention and I was glad that Stefan had placed a Micro-Traxion above me, which would protect Stefan from me pulling him off if I fell.

Nevertheless, I was surprised when I followed the rope around a corner to a grassy ledge to find Stefan belaying me, snacking on corn nuts.

“Sorry man, I just felt like I needed a re-set. My hands are cold and I’m feeling queasy. That pitch was kinda hard and I didn’t like that Micro.”

What?! Stefan is literally one of the strongest mountain athletes I know. His climbing experience and ability so far outweighs mine that I felt sheepish for even tying in with him, even though he proposed the outing.

“No worries, dude,” I replied, happy for a chance to stop and put on my wind shell in the blustery wind, “let’s just take a minute.”

Stefan continued to apologize for being off his game, even recounting that this hadn’t happened since the time he had the flu in Joshua Tree in 2004. Twelve years ago. I wasn’t concerned, but I was also psyched and kind of chomping at the bit and I’d dealt with plenty of lethargy in the mountains to know that sitting it out rarely works.

So, we consulted the topo, scrapped our plans for traversing into the harder SW Corner route, and instead decided to continue up the more moderate Kor Route, of which we’d already cranked the crux pitch.

I took over the rack, led a long pitch, and brought Stefan up. He said he felt a little better cruising the more moderate terrain, so he took back the lead and led us to the summit in a single block, linking the remaining three pitches on the route. The climbing was easy but generally just ok. Pretty steep, actually, but always with jugs, and always with plenty of loose blocks and flakes. There also wasn’t any super obvious feature and it was more about finding the path of least resistance through the rock that you couldn’t totally trust. At least the summit was spectacular, with dizzying views down to Sky Pond and the directly adjacent Petit Grepon. 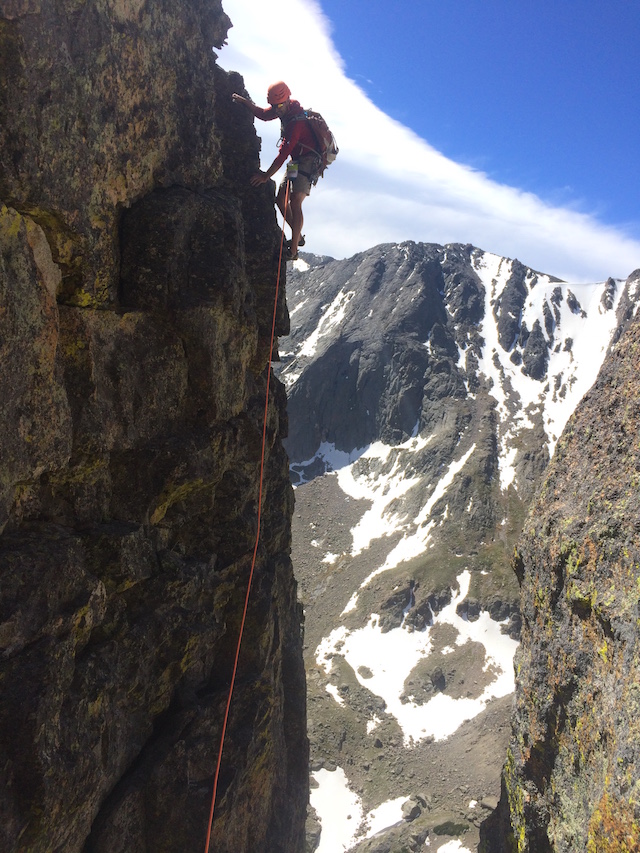 Stefan downclimbing on the way to the summit of the Saber. 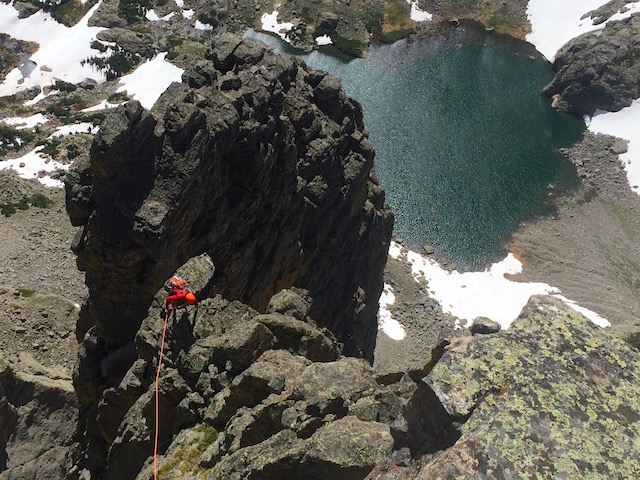 Summit of the Saber with Sky Pond way below.

On top, however, I was a little surprised at Stefan’s continued apathy. Instead of quickly re-racking and charging on to the next objective we were just sort of aimlessly listing in the sun, with Stefan casually snacking on beef jerky, apparently in no rush whatsoever. Eventually, though, we motivated, downclimbed a long, loose gully to the east of the Cathedral Spires with several chockstone cruxes, and found ourselves at the base of the Petit Grepon, right at noon. 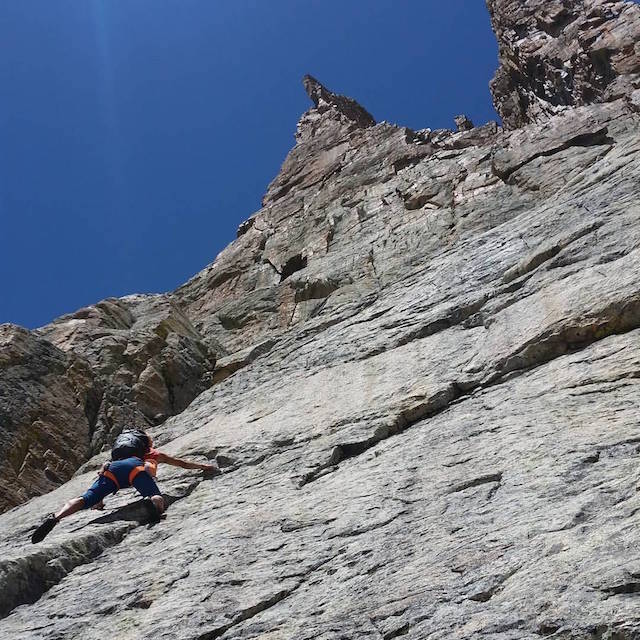 Scrambling the approach pitches of the Grepon. Photo: Stefan Griebel.

The weather was brilliantly sunny and warm, hot even, at the base of the South Face. The first couple pitches of the Grepon are enjoyable scrambling in the 5.4-6 range, up through a big chimney leading to a left-leaning 7+ pitch. Wearing a pack, I wasn’t comfortable onsight scrambling the couple of awkward moves on this pitch, so we quickly transitioned into simul mode and I led upwards over more moderate terrain until the base of the 8+ finger crack pitch.

This was the planned start of Stefan’s leading block, and when he arrived I was heartened to see that he seemed to have perked up a little. Stefan took a slight variation to the right directly off of the belay, and I should’ve followed his lead as the traditional line straight up felt more insecure and awkward than I’d anticipated, but it all went fine. Above there, the route wraps around more onto the southeast arete/east face and becomes truly spectacular. Several hundred sustained feet of steep, juggy 5.7 climbing with incredible exposure and an ever-narrowing spine of rock. It was one of the most fun and stimulating chunks of climbing I’ve ever done.

When I arrived at the vanishingly small summit ridge, Stefan was a transformed man, back to his usual self, really. He was barefooted and buzzing with energy; he’d caught a party at the summit and clearly wanted to get off as quickly as possible before getting caught behind them on the extensive rappels. 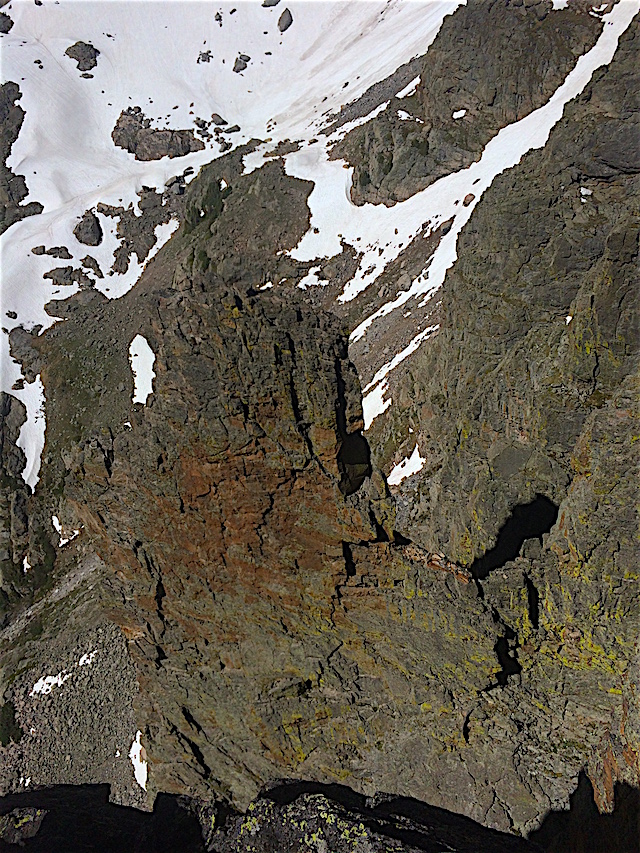 The east face of the Petit Grepon (with descent off the back) as seen from the Saber.

Stefan down climbed off the back of this spire during his speed record, but when he asked me to take a look, I knew there was absolutely no way I was doing that. It looked improbably steep and vertigo-inducingly exposed. Problem was, we only had a 30m rope and would need a 60m line to pull off the rappel. Unless you’re Stefan. He was fine with down climbing, so we fixed our line, I slid down it, Stefan pulled it up and doubled it, rappelled as far as it went, and then down climbed the rest of the drop. I was impressed, and thankful for such a competent partner. One more short rappel brought us to the 5th Class chimney that we scrambled to get up to the saddle at the top of the Gash, leading to the base of Sharkstooth.

Stefan was now fully amped and though we’d been uninspired by the apparent route earlier in the day, there was no way we were skipping it now. I was a little unsure about onsight soloing an alpine 5.6 route—grades can vary wildly—so convinced Stefan we should keep wearing our packs just in case I felt the need to rope up. Fortunately, there was no need for that, and the route was one of the most amazing scrambles I’ve ever done. 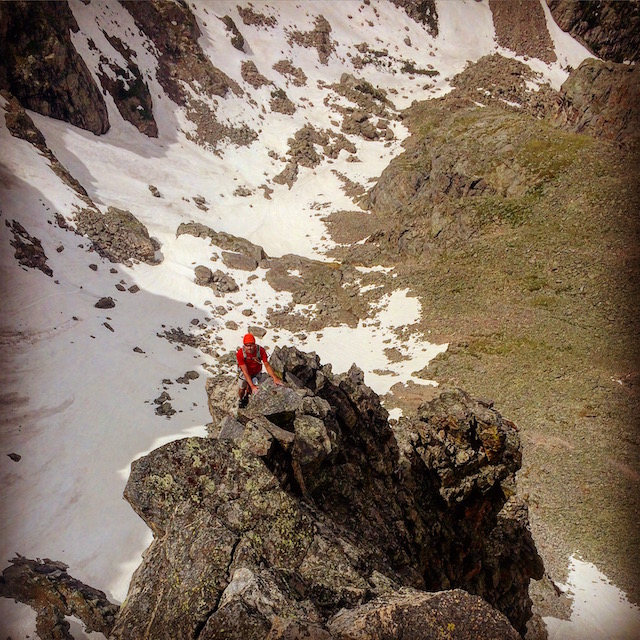 Once on the ridge, the position became spectacular and truly amazing that such a moderate route exists on such a consistent, steep, and aesthetic line on the peak. There were a couple steeper cruxes that required attention, but overall it was a joyous romp to the summit.

The guidebook had proclaimed our planned downclimb—the East Gully—a meager 5.4, so we were confident and packed everything away on the summit, changing out of long pants and trading rock shoes for more comfortable approach footwear. Pretty quickly, however, the descent became surprisingly spicy and Stefan and I both paused to retrieve our chalk bags from deep in our packs. We were too lazy to get the rope and harnesses back out, but with attention and care, eventually made our way back down to the base of the tower. 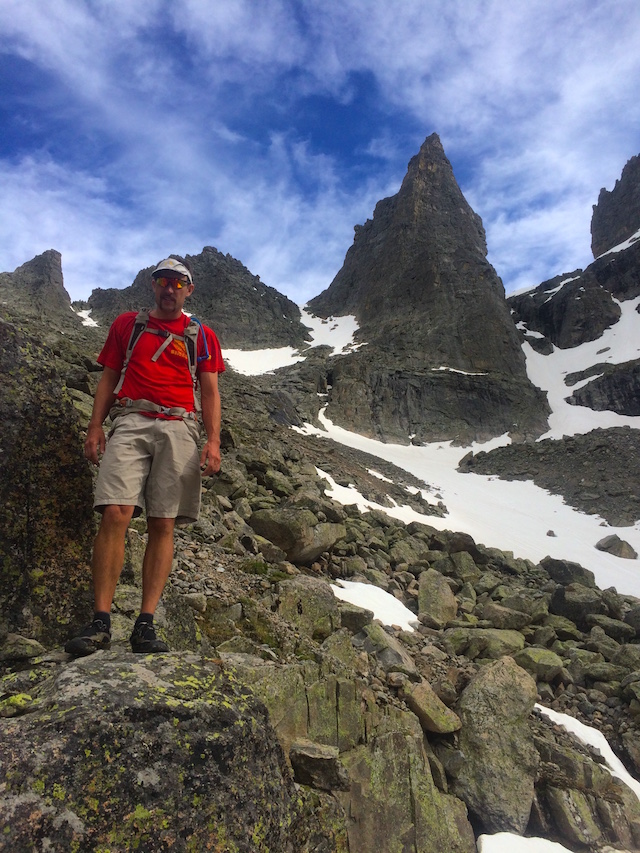 Stefan with Sharkstooth (the NE ridge is left of center on tower).

Alas, some route-finding issues on the snowhike back down the Andrews Glacier drainage necessitated one final rappel, but soon enough we were back on the trail and running the three miles back down to the parking lot where beers and tinned mackerel awaited. Such a satisfying day in the mountains.