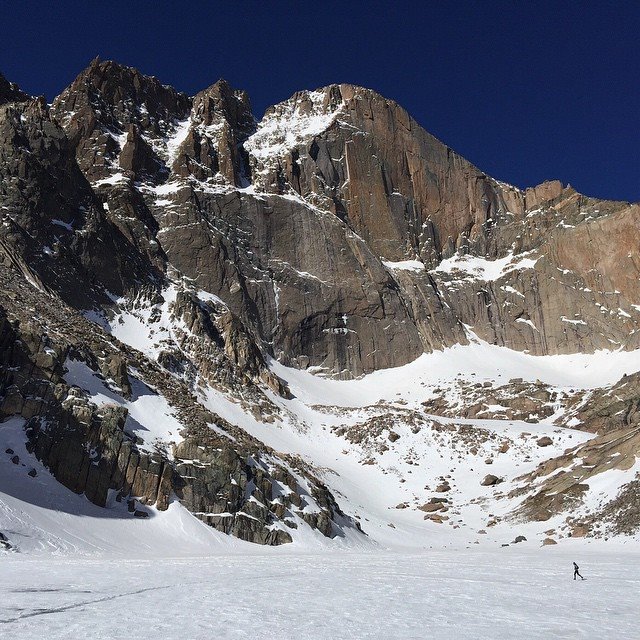 4/13/2014
Mon – Longs Peak (3:48, 5000′)
The forecast today looked perfect up high, so Joe (whose lovely photo that is, above) and I went for a long overdue ascent of my favorite mountain. Snow conditions are overall getting super stable right now, but we still opted to skip any technical routes, instead kicking our way up Lambslide to the Loft and wrapping around to take Keplinger’s Couloir and the Homestretch to the summit. Once on top, I was only a little bit surprised to see Peter Bakwin’s initials having beat us to the summit register earlier in the morning. Conditions on top were immaculate, and I never donned more than a long-sleeve shirt all day.

On the descent, the Cables dihedral was in perfect condition, too—styrofoam-like snow—but since I’d hauled the rap cord all the way up the hill I zipped down the first pitch before leaving the rope to Joe and just downclimbing the final pitch. Because Longs is always more than a simple hike up and jog down, an ascent, especially in non-summer conditions, always feels a lot more satisfying than almost any other mountain I do on a semi-regular basis. Today was no exception.

4/14/2015
Tue – 1st Flatiron+Green+Southern Dinosaur Egg
After the usual trip up the front of the mountain, I ran down Bear Canyon with the intention of taking a look at the Dinosaur Eggs—a couple of relatively obscure formations at the foot of Dinosaur Mt near the mouth of Bear Canyon that I needed to scout to tick off the Roach Classics list. The Southern Dino Egg proved to be pretty easy to access—it’s just across the creek from the Bear Canyon trail—and the first pitch up the chimney on the east face was engaging with some steep stemming moves to negotiate a chockstone/narrowing of the chimney about half-way up. The real business, however, is the final 40′ of vertical 5.6 face climbing to the summit. After a few minutes of looking around I decided it would feel much better in climbing shoes and maybe with some chalk and definitely with a rope for the rappel off the summit; downclimbing that last pitch is certainly not a savory prospect.

I wasn’t even sure what the Northern Dinosaur Egg looked like—and it wasn’t immediately obvious (though some on-line sleuthing has since cleared things up)—so I just scrambled up along the base of Der Freischutz and ran down the Dino Mt trail back to the Mesa and back to Chautauqua. An enjoyable easier outing that will hopefully set me up to feel rested for a long run tomorrow.

4/15/2015
Wed – 1st Flatiron-Green-Bear-SoBo-Seal-Green-MA-1st Flatiron-1st Pinn (5:18, 10,000′)
This run started out pretty terribly. (“Run” is a bit misleading. While this trip through the mountains certainly contained more running than usual because I didn’t bike to-and-from Chautauqua, if I sit here and roughly add it up in my head, of the 5+ hours I was out there, just a bit over 2hrs of it was actually spent running. The balance was hiking and scrambling. I guess I insert this caveat as a bit of a defense, given that my shin took a marked turn for the worse after this outing.)

I ran from my doorstep with plans to head up and over the hills to Walker Ranch and Eldo Canyon before coming back over the Boulder peaks. However, on my run up to Chautauqua I had very little energy and felt uncoordinated—I’m attributing it to still coming back from illness—so instead of running up Green I decided I’d break things up with a scramble of the First Flatiron. I felt semi-revived on the descent from Green, but when I got to the point on Bear’s West Ridge where I would duck down to Walker Ranch I knew that my legs didn’t have it for a bunch of running, so I continued up the ridge to Bear and SoBo, hoping to compromise by doing a bunch of scrambling instead.

This went great. My legs seemed to finally come around on the descent of Fern Canyon, so climbing Seal Rock was a pleasure. From there I went back up Green via my usual scrambling route, and then felt like I was just hitting my groove, so dropped back down for a quick lap on the Morning After and another on the First Flatiron before descending down to the Amphitheater for a final tag of the 1st Pinnacle there. Great day. However, by the end I was getting pretty bonky, so when I got back to Chautauqua fully expecting my bike to be there (I almost always bike to Chat), I had a pretty downhearted moment of despair when I realized that I had run from my doorstep that morning and I’d have to run the 10min back to my apartment, too. Not a big deal, but it’s funny how the expectations the mind sets for itself has such a marked effect on perceived effort, fatigue, and general level of enjoyment.

4/16/2015
Thu – Ever since San Francisco ~3wks ago, I’ve been managing this point-specific sore spot on my shin that I suspected was some periostitus. I was chagrined when taking a week completely off for the flu seemed to have almost no impact on it, but, until yesterday, a scrambling-heavy blend of outdoor bipedal activity (as opposed to the straight running that I really should/would be doing if my shin felt 100% injury-free) didn’t seem to make it any worse.

4/17/2015
Fri – When I was out for an afternoon walk (which, the entire time, I had ambivalence about, considering that my shin hurt), I saw a woman running down the creek path with her neck craned way over to one side, but maintaining forward progress. This reminded me of a similar run I did back in August of 2009 when I woke up with a serious crink in my neck, but was able to complete my intended run up and down the Sawatch Range’s Mt. Belford and Oxford as long as I kept my gaze directed down and didn’t try to look up and to the right. Which was kind of a bummer, because a lot of the time, running in the mountains involves swiveling one’s head back and forth so as to best admire the surrounding peaks.

4/18/2015
Sat – Mt Saint Vrain Skiing (2:21, 3500′)
After the crazy snow of the last couple days, I had to get up on the hill to check it out. There seemed to be at least two feet of heavy wet snow at the trailhead, and even more up high. Some kind of single-track ski vehicle (think like if a snowmobile were cut in half lengthwise) had thankfully broken trail shortly before me, otherwise I don’t know if I would’ve made it wallowing up on my skinny skis. Above 10,700′ or so, where I left the broken path, the snow was noticeably drier and I didn’t sink in quite as much, making skinning/slogging reasonable.

Once I finally clicked in for the descent, I was immediately reminded of how much fun skiing is, especially in that kind of deep powder. Unfortunately, the day was warming up and only a few hundred feet lower the snow was almost untenably sticky. Still a worthwhile outing, especially getting above treeline amongst the swirling clouds and graupel squalls, the better to match my mood.

4/19/2015
Sun – My shin continued to hurt, so I spent most of the day mentally trying to countenance a scenario where I have a stress fracture and what that’s going to make my life look like for the next couple of months. Not an appealing outlook. The first few days are always the worst. (I have since had it evaluated by my go-to physio—Jeremy Rodgers—and it appears to be a stress reaction, bordering on stress fracture.)

In other news, I read a couple books last week: Reinhold Messner’s Free Spirit: A Climber’s Life, Philip Roth’s I Married A Communist, and Cormac McCarthy’s All The Pretty Horses. Messner’s book was nearly unreadable. It was pure drudgery to get through it. Overall, I’m just not much for nonfiction—even if it’s about alpinism—but based on this volume, I would rate Messner’s ability as a storyteller to be approximately inversely proportional to his brilliance as a climber.

This was the sixth book I’ve read by Roth in the past year or so, and while I had been wowed by American Pastoral, nothing else had impressed me as much. IMAC turned out to be surprisingly fantastic. Totally on par with AP. Has me excited to check out The Human Stain, the third in this particular Zuckerman trilogy.

I’d somehow made it this far in life without reading any Cormac McCarthy, but apparently his name often comes up as a logical candidate for the Nobel Prize in Literature, so I figured I should get on it. ATPH was very good. Depending on my mood, I find his style of prose in this (I wasn’t just imagining it, it actually has a name: polysyndeton) either evocative or exhausting. It must have been more the former, as I find myself eager to read more by him.

Last week I was thinking how it’s a little odd that I would likely call Apologies to the Queen Mary one of my favorite albums of all time, and a song from that album—“I’ll Believe In Anything”—to easily be in my top-3 favorite songs of all time, but I would never really consider Wolf Parade to be my favorite band at all. Probably because it was more of a supergroup project than anything. Anyways, here’s a song from a different Spencer Krug project that I also enjoy.