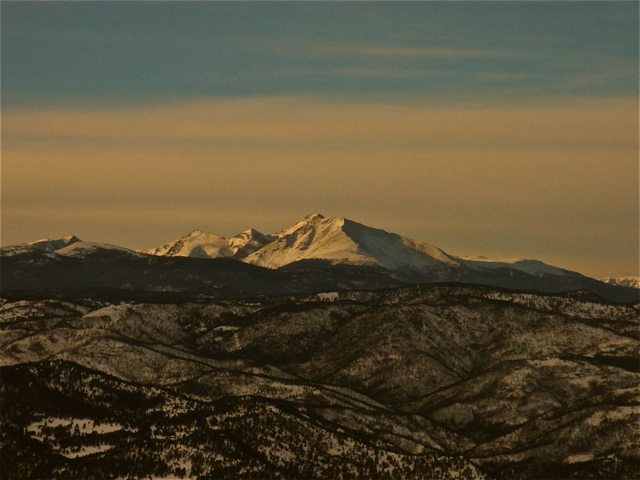 1/19/2015
Mon – Flatiron Classics Scrambling (4:31, 6000′)
1st Flatiron->3rd Flatiron->Morning After->Green Mt Pinnacle West Chimney->Challenger->Green Mt->Angel’s Way->Achean Pronouncement->Primal Rib->Satan’s Slab->Tomato Rock
After a month away from any serious scrambling it was a real joy to get out for an extended session on the rock today. The First and Third were basically dry, but the initial slab on the Morning After had many small rivulets of water that spiced things up a bit. Surprisingly, the roof crack crux was completely dry, as was the West Chimney on GMP. On Challenger, for variety’s sake I climbed the beautiful fingers-to-hands crack on the lower left side of the east face for the first time. A couple conglomerate pebbles ease the face moves that connect the bottom, wider crack to this higher crack. Worth the extra time I’d say.

From Challenger I headed to the top of Green where I bumped into Peter Bakwin, fresh off his six-week trip thru-hiking the length of New Zealand’s South Island. I thought that maybe I’d gotten my fill of rock for the day, but when Peter asked how I was descending the mountain I spontaneously answered that I would be heading down to Skunk Canyon in search of some more dry rock. Which is what I did.

After making the traverse on the first pitch, the first half of the long crack on the Achean Pronouncement was completely full of ice and snow, which slowed things down a bit, but then the arete and the Primal Rib were all in good condition. After slaloming down through the snow back to the base of Skunk Canyon, I finished up with an ascent of Satan’s Slab, having to pay special attention at the beginning due to more meltwater on the face. The most convenient way back to Chautauqua (I think) from the summit of Satan’s involves hiking a couple hundred feet more up to the base of the Fist, then descending down the south side of the Fifth Flatiron to the Royal Arch. From there I continued descending down to Woods Quarry to avoid the crowds on the RA trail—that were out enjoying this most beautiful and warm MLK Day—before running back down to Chautauqua.

1/20/2015
Tue – Allenspark Skiing, 3 Laps (3:31, 6000′) + Climbing Gym
I awoke this morning to an unexpected skiff of snow covering everything in town—including the Flatirons, my planned activity for the morning—so quickly changed plans and headed up to Allenspark for some skiing. It was a good outing there, bolstered by about three inches of powder at the top of the hill that made me finally realize why people get so excited about this stuff—creamy, floaty turns are a lot more fun than scraping and skittering down crusty old snow. Immediately afterwards, I headed to the climbing gym for a session with Timmy and Joe.

1/21/2015
Wed – Allenspark Skiing, 3 Laps (3:30, 5000′) + Climbing Gym
Headed back up to Allenspark with Joe and Timmy this morning just as the snow was starting. By time we got to the trailhead, it was a full-on powder day with a few inches of fresh on the ground and tons more dumping down. On the second lap I whacked my left thumb (right at the base of the digit) on a tree hard enough that my initial reaction was that I broke it. It calmed down enough to where I mostly forgot about it for the rest of the outing, but then later in the afternoon when Joe and I were at the climbing gym it somewhat unexpectedly flared back up with a vengeance while I was trying hard on a big, open-handed squeeze hold. That abruptly ended the session for me and I spent the rest of the evening with it in quite a bit of throbbing pain, making it uncomfortable to even touch it.

1/22/2015
Thu – Green Mt. (1:38, 3000′)
My brutalized thumb from yesterday was still extremely painful this morning. With poling out of the question I decided to test the shin with a run up the hill from my doorstep. It was 100% painfree and a real pleasure to be out making strides in the fresh snow and brilliant sunshine. If I can keep up a 3x/week running, 4x/week skiing schedule for a while, that will make me happy.

Brendan from Semi-Rad published a nice piece today giving perspective on “pointless” activities, such as free climbing Yosemite’s Dawn Wall. I don’t get especially worked up about this kind of stuff, probably because over a decade ago, when I was studying for a degree in Philosophy, I found myself mostly in agreement with the notion (with significant encouragement from the likes of Kierkegaard, Camus, and Sartre) that the universe is basically an indifferent, meaningless place.

On the surface, this can be a frightening prospect, but it is also a freeing one in that it accords individuals with the responsibility and agency to create meaning. Instead of allowing us to devolve into non-stop pillaging and murdering (as it seems some would have us believe is the logical conclusion), I think it instead suggests that it is incumbent upon the individual to go out into the world full of curiosity, searching for experiences and emotions and knowledge and in the process inevitably happening upon instances of beauty and joy, and maybe even moments that feel disturbingly close to something like truth. But this takes constant effort and work and initiative—no matter the arena where one decides to apply oneself—especially when ideology and commandments are removed from the equation. But, in the end, that’s really all we have, so, as Camus concluded, one must imagine Sisyphus happy. And climbing a big rock in a satisfying, rewarding style seems as arbitrarily valid as just about any other pursuit I can think of.

Finally, in what seems to be the increasingly ironic culture that we live in, I think it takes a fair amount of courage to so unequivocally and publicly care about something (e.g. climbing a big rock), especially something with such a high probability for failure. I’d venture to guess that a lot of the people that find climbing El Cap irresponsible or pointless or selfish have probably never cared that much about almost anything, ever. Otherwise, they’d get it.

1/23/2015
Fri – Allenspark Skiing (2:19, 4000′)
Today was frustrating. On the very first descent I decided I’d branch out and start the run from the top via the trees instead of just taking the road back down. Due to my bumbling, flailing ways I ended up nearly ripping the sleeve entirely off my shell, which put me in a foul mood, and just when I’d calmed down a bit and was starting my second climb back to the top of the mountain Joe informed me his skins weren’t sticking so his day was done. Bugger. I’d had the same problem on my last lap on Wednesday, so I could sympathize, but driving 1h30 roundtrip for only two laps doesn’t really balance the equation for me. So it goes sometimes.

1/24/2015
Sat – Allenspark Skiing (5:42, 10,000′)
With the Flatirons still (somewhat) cloaked in snow and ice, I opted for skiing again, and was looking to get in a big day after the last two abbreviated outings. With it being the weekend, there were a fair number of cars at the trailhead but puzzlingly not too terribly many people actually out on the route. The tracked, off-road vehicle that we’d seen yesterday was back out today, too (hauling a couple of snowboarders back up the hill), and its tread did a nice job of basically grooming out the road, making for efficient skinning and speedy descents.

1/25/2015
Sun – Allenspark Skiing (4:17, 8000′)
With forecasted brilliant weather for the next couple of days, I decided to get one more day in on the toothpicks before scrambling flatties next week. I got a nice early start, which means I had two laps done before anyone else even showed up, and in general I just found a really nice rhythm today on both the uphills and downhills. Alas, I bonked pretty hard on the final 2000′ ascent, and was sort of kicking myself for not eating breakfast and/or not packing a cookie or croissant or cheeseburger so that I could get in one more lap. As it was, I rounded out the week with 25 and a half hours and 42k’ vert. Starting to build a little bit of fitness I think. Lovely day to be out in the mountains.

This definitely made my week as a whole, better.

Of course, the irrepressible Ty Segall already has a new EP out this year, too. It’s pretty fun to be a fan of an artist with such a large, consistently excellent (and ever-growing) catalog of material.