1/5/2015 – Monday
Some days don’t feel like much happened, upon reflection. Definitely more of a winter phenomenon for me.

1/6/2015 – Tuesday
After some early-morning hiking/scrambling picture-taking with Fred for BUFF, I headed out to Gunbarrel to meet with Ultimate Direction. Buzz has done a remarkable job rejuvenating the brand as its director the last three years, and he continues to approach the role with vigor and enthusiasm. The main purpose of today’s meeting was to get an early look at some new pack designs. We’re hoping to begin testing even earlier in the process this go-round so that as many kinks as possible can be identified and worked out before it goes to market over a year from now. The behind-the-scenes on this stuff is both fascinating and a little frustrating. Product design and development is a sometimes cumbersome process that—once the major direction has been determined—can only be micro-tweaked, so it’s important to be sure that direction is the best one as early on as possible.

After a few days away, I got back into the climbing gym with Joe in the evening. Productive session.

1/7/2015 – Wednesday
I finished Layton Kor’s Beyond The Vertical this morning, which was a fairly unusual book choice for me. Kor—along with California’s Royal Robbins—was the pre-eminent North American climber of the 1960s; he opened up dozens of classics in Eldorado Canyon, Rocky Mountain National Park, the Black Canyon of the Gunnison, the Desert Southwest, and Yosemite itself, to mention nothing of his European exploits in the Alps and Dolomites. However, BTV wasn’t a very interesting read. The historical photographs were fantastic, but I found myself willing my way through most of the text. (The Galen Rowell story about the Salathe Wall was a notable exception.)

Later, in the afternoon, back at the climbing gym, I found myself about to complain about the slipper on my right foot that has become frustratingly stretched-out and baggy the last few weeks (making technical edging near impossible) when I remembered Layton’s retort to a partner who was whining that his boots wouldn’t stick: “If you’re a good climber, you could get up this in mukluks!”

1/8/2015 – Thursday
On Tuesday, Fred had suggested that Joe and I get out with him for some ice climbing this week up at Moffat Tunnel—set up a top-rope, practice placing screws and swinging picks. I was game, and, anticipating turning it into a full day of high mountain winter sport, packed the skis as well. Joe and I are rank novices at both of these activities, so—at least for me—it was a day full of comical blunders and petty frustration. After a handful of ice pitches, we switched out crampons and ice tools for skis and poles and headed out on a tour up towards treeline and the Continental Divide. Fred was commendably patient the whole way through, and we arrived back at the car just as it was getting dark. I was just happy to survive the whole day with all limbs intact and without being benighted.

1/9/2015 – Friday
Inspired by yesterday’s shenanigans, Joe and I headed up to Loveland today to check out their uphill access. It turned out to be another absolutely brilliant day of weather—shirt sleeves and no wind at 12,000′!—and the skinning lap there is pretty decent, about 1200′ of vert in ~1.3mi. Still tired from yesterday (I’m feeling pretty profoundly out-of-shape—especially at altitude—after taking the last couple of weeks almost completely off), I only managed three laps before I could feel my form deteriorating significantly and sloppily recruiting my hip flexors a bit too much while skinning. Nevertheless, it was a fantastic day to be outside and also a much-needed opportunity to practice staying upright on my skis in a forgiving environment.

1/10/2015 – Saturday
Today I finished Carol Bly’s Letters From The Country. This was a thoughtful Christmas gift to my parents from my brother-in-law—they happened to already have a copy, so I snagged this one. The book is a collection of essays about living in a small Minnesota town (pop. 2400) outside of the Twin Cities; I have extensive experience with the rural, Midwest, small-town culture from the first 18 years of my life, so I could identify strongly with most of the chapters. The quality of life in these places presents a tough conundrum of balancing the nourishingly slow pace of life and closeness to the land with a decided dearth of humanistic culture and discourse. Life’s full of difficult choices and trade-offs I suppose.

I dispelled any literature-induced angst in the evening with a gym session with Joe. For some reason, it was one of the better days I’ve had in there this season; I felt uncharacteristically on-point on the wall.

1/11/2015 – Sunday
I headed back up to Moffat Tunnel today for another go at shuffling around in the woods with boards strapped to my feet. It started snowing right as I pulled into the parking lot, which provided a nice ambiance and a couple extra inches of cush on the trails. After a warm-up lap up to Forest Lakes, I continued up the trail towards Heart Lake and the Continental Divide and was pleased to make it up to 11,300′—above treeline and at the foot of the headwall leading up to the ridge. The grade was a bit frustratingly flat a lot of the way back down, but after tagging one more lap up to Forest Lakes I was back at the car and pretty excited about getting better at this stuff and the kind of high mountain access that it will provide in the winter.

1/12/2015
Mon-AM: Green Mt (1:22, 3000′)
A crazy glaze of ice covered everything this morning, making pretty much all surfaces super slick. Despite this I biked to Chautauqua and donned Microspikes for a hiking lap on the hill. The inversion layer was higher than usual, meaning I could just barely see the sun while on the summit of the mountain, but definitely wasn’t out of the thick fog blanketing everything under 8500′ or so.
PM: Allenspark Skiing (1:29, 2000′)
I met up with Joe for a lap on what is probably the highest quality, most convenient, non-resort locale for getting some vert on the boards. The snow levels were meager, but just enough to avoid hitting any rocks—unfortunately, my neophyte skills meant I took a tumble and snapped a pole so there was no second lap. The best part of the outing was rising high above the inversion and enjoying the views of the tendrils of fog that were creeping up each of the Front Range canyons.

1/13/2015
Tue – Winter Park Skiing (4:00, 6700′)
Joe and I rallied over the hill (Berthoud Pass) for some laps on the groomers. It was worth it. A resort offers the easiest terrain for gaining lots of vert and descending quickly/efficiently (at least with our meager skillsets). The slopes were surprisingly unpopulated and the weather was ideal; we’ll be back for sure.

1/14/2015
Wed – Green Mt (1:26, 3000′) + Climbing Gym
After reaching #998 late in 2014, today was my rather inadvertent 1000th lifetime ascent of Green Mt. More thoughts on this coming soon. In the evening, Joe and I went out to Longmont to get a look at the new Oskar Blues Coffee operation. It’s literally a one-man show (Derek) who handles everything—bean selection, roasting, packaging, distribution, and marketing. To Joe and I, the combo of beer and java makes a lot of sense—they’re definitely the two most enjoyable beverages in my day-to-day life. It was quite eye-opening to see how considered, crafted, and thoughtful everything at Oskar’s is, especially in its support of the outdoor community.

1/15/2015
Thu – Allenspark Skiing (4:01, 6000′) + Climbing Gym
Today’s weather was unseasonably warm and calm. I maximized my time outside with three solo laps of slogging uphill through the forest. Could use a little more snow up there, but all in all this is a really nice location for racking up some no-impact vert at altitude (it tops out at 10,700′). It’s unusual behavior for me, but I’ve found that the somewhat mechanical, repetitive nature of below-treeline skinning has inspired a desire for auditory distraction/entertainment that I have never felt when I’m running/hiking/scrambling in the mountains. Today, I obliged this feeling on the last two uphill sections with two NPR Podcast programs—the  nascent Invisibilia (outstanding) and the old standby Fresh Air (very, very good, of course, but I have somewhat mixed feelings about Terry Gross as an interviewer).

1/16/2015
Fri – Winter Park Skiing (5:05, 10,200′)
After dipping our toes here on Tuesday and learning the lay of the land, Joe and I wanted to come back and put in a solid session. Five laps sufficed. I never had any exceptional energy—I think yesterday’s effort was lingering in my legs—but due to the lack of impact, amassing vert on skis is remarkably less abusive than it is while running, so today’s outing was more about managing fuel and willpower.

1/17/2015
Sat – 1st Flatiron+Green Mt+2nd Flatiron (1:40, 3000′) + Climbing Gym
The last couple days of warm weather have finally melted off the Flatirons enough for some semi-dry scrambling—I had to kick steps up some snow/ice at the base of the First to even make it on the rock and then maneuver many patches of snow/ice on the rock itself. It had been almost a month since I’d scrambled anything, so today’s outing was a particular pleasure. After summiting the mountain, I decided to avoid a large chunk of ice on the trails by instead just down-climbing the Freeway route on the Second Flatiron.

1/18/2015
Sun – 1st Flatiron+Green Mt+2nd Flatiron (1:33, 3000′)
Same exact outing as yesterday, though the rock was a bit drier and the ice on the trails a bit softer. January thaw inspires spring fever. Thanks to skiing, this was a proper week of training at 20hr and 37k’. The last couple of days have been promising (i.e. painfree) for the shin, but I plan on continuing to focus on skiing for as long as conditions allow, so I can build fitness without bashing away at that particular appendage. I need to have it intact for when I’ll really need it, later in the year. 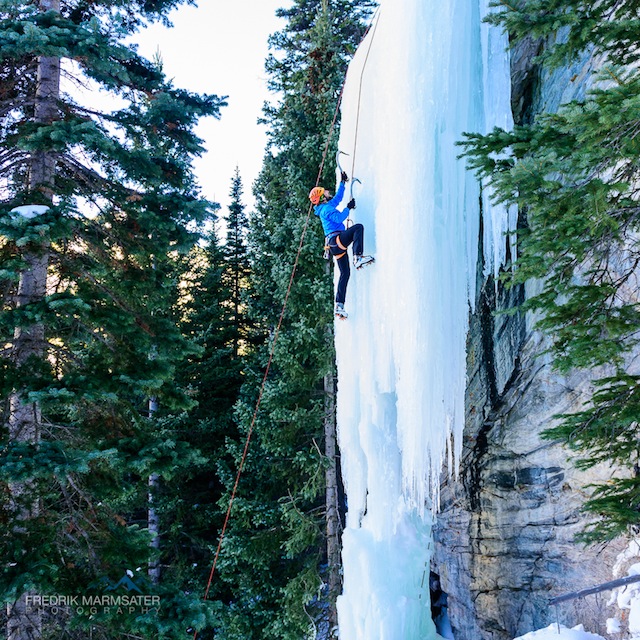 Starting the day off right in some beautiful light above the inversion in Boulder. Photo: Fred Marmsater.

After finally getting into a bit of skiing myself the past couple weeks, I find this simple little clip from Joel to be especially nice: a man, his natural surroundings, and an obvious desire to interact with them. (Also, check out those tracking shots!)

will shovel. will ski. from the Wolpertinger on Vimeo.

Leave a Reply to Jeremy