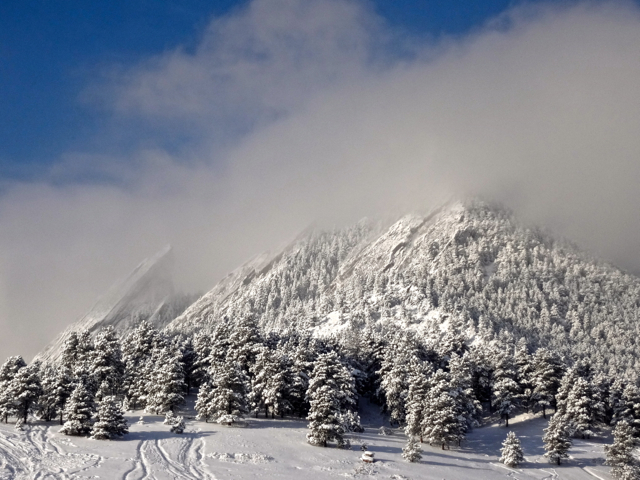 01/26/2015
Mon – Flatiron Scrambling (4:22, 5500′)
1st Flatiron->3rd Flatiron->Morning After->Green Mt Pinnacle West Chimney->Challenger->Yodeling Moves->Regency->Royal Arch->5th Flatiron->Fist/Hippo Head->Green Mt
It hit +73F today in Boulder. Which felt hot. On the bike ride up to Chautauqua, at 8:30am, I already felt like shedding my shirt, so I could tell it was going to be a sloggy, dehydrated day on the big east-facing slabs. But it was also glorious, of course. A little too much running water on the Morning After, and a little too much snow on the between-scrambling bushwhacking, but otherwise fantastic. The notable thing today was finally checking out the Fist/Hippo Head above the 5th Flatiron. I’ve passed by this formation innumerable times, but the view of it from the summit of Satan’s Slab is particularly imposing, so I’ve known I’d need to get up it soon. Especially since the hand crack leading to the summit was supposed to be the best in the Flatirons. After negotiating several snow-covered ledges, the last 45ft or so (the 5.6 crack) were, indeed, nice, and I took my time on it, making sure I was comfortable reversing every move in case I was unable to find a more suitable downclimb off the top. Conveniently, however, I did discover an improbable but sufficient series of holds leading down the west face and to the ground. This is nice, because it logically deposits you that much closer to the summit of Green.

1/27/2015
Tue – Flatiron Scrambling (4:38, 6200′)
Achean Pronouncement->Primal Rib->Seal Rock->Fiddlehead->Onoclea->Satan’s Slab->Fist->Green Mt->1st Pinnacle & Slot (Amphitheater)
Another borderline uncomfortably warm day here in Boulder, topping out over +70F again. Today I wanted to focus on getting more actual running into the outing (as evidenced by today’s 10 miles versus yesterday’s seven), so after running the Mesa Trail over to Skunk Canyon I started the day off with the Achean Pronouncement and the Primal Rib. A 5.7 slab move in wet shoes followed by a snow/ice-filled fist crack isn’t the most casual warm-up, but it certainly snaps things into focus quickly. From there it was a nice run over to Seal Rock at the base of Fern Canyon, which then links logically into the Fiddlehead->Onoclea scramble/downclimb/scramble combo. After that, it was more running back over to Skunk for the Satan’s->Fist enchainment on the way to the summit of Green. Before heading back over to Chautauqua, I stopped off in the Amphitheater and managed to polish off the Slot climb to the West Bench, which has what feels like the most precarious rope-free move that I do anywhere in the Flatirons (just after the bulge half-way up), despite its 5.6 rating. Today, however, I discovered a nice undercling/lie-back sequence that largely dissipated this precariousness.

1/28/2015
Wed – 1st Flatiron+Green Mt (1:59, 3000′)
Today I decided to go for a legit run, from my doorstep, let’s see how the shin responds. It was fine, I guess. After running up to Chautauqua I negotiated the token scramble of the First and bumped into Timmy O’neill who was belaying like six or eight dudes up the first pitch, simultaneously, all while providing non-stop entertaining commentary for his partners. My hearing loss makes it hard to tell what’s going on a lot of the time (I don’t wear my hearing aids when I run), but Timmy was exercising the ol’ vocal cords this morning. For the run down from the summit of Green, I maximized dirt by descending Flagstaff Mt all the way down to Eben G Fine before jogging the last couple of blocks back to my apartment. The shin never hurt, but by the end I just had an overall…sense? intuition?…that it was pretty close to its limit.

1/29/2015
Thu – Winter Park Skiing (5:55, 12,300′)
Joe and I rallied over the pass for a productive day on the hill. After the first couple of laps my body found its groove and I started to feel really good, even on the sixth and final lap. The first three laps were abominably warm—we were sweating buckets—and this eventually seemed to lead to some problems with Joe’s feet so he opted out of the final circuit. Though not offering much support on downhills and sporting a narrower racing last, I’ve been surprised at just how surpassingly comfy my Dynafit PDG boots have been all season, especially given the issues that I seem to hear from people all the time about cold feet, blisters, or simply ill-fitting ski boots. Well, now I’ve probably jinxed myself.

1/30/2015
Fri – Flatiron Scrambling (4:35, 7000′)
Achean Pronouncement->Primal Rib->Satan’s Slab->Fist->Yodeling Moves->Morning After->3rd Flatiron->1st Flatiron->Green Mt->Amphitheater Classics circuit
A lot of Skunk Canyon plus the Third Flatiron become closed to scrambling for the next six months on Sunday (various bird nesting protections), so I decided to spend today hitting all those nice rocks that will be off limits until this fall. In stark contrast to my scrambling outings earlier in the week, today was pleasantly overcast and gloomy, meaning that instead of sweating and wilting in the sun I had great energy and enthusiasm all the way through despite no water or calories. It’s crazy how much of a difference direct sun exposure makes on endurance performance.

1/31/2015
Sat-AM: Allenspark Skiing (5:10, 8500′)
I wanted to put in a big day of skiing (was looking for at least 10k’ vert), but the last couple of days seemed to catch up with me a bit, and all I could muster was four laps, though I extended the third an extra 500′ more up the hill than usual, venturing off of the FS road and trying to get to treeline. At 11,200′, I didn’t quite reach treeline, but I did get a nice view of the big inversion that was keeping a layer of clouds at about 8500′ or so. The fourth lap was a trudge.
PM: First Flatiron (0:49, 1600′)
I knew that it was supposed to snow some overnight, so when I got home from skiing I gobbled a snack, changed clothes, and hopped on the bike up to Chautauqua with a headlamp, just in case I was nabbed by darkness up on the big rock. Despite being tired from the day on the planks I had a surprising amount of pep in my legs while scrambling and I enjoyed a soft, rosy, sunset glow over the city from the summit of the First. Was happy to have the light on the jog back down to my bike.

2/1/2015
Sun – Allenspark Skiing (5:19, 10,000′)
Today was really nice. I slept in (7am or so), drank two cups of coffee at my windowsill while admiring the freshly-tinseled view out my window (instead of drinking the coffee in the car), and then decided I’d head back up to Allenspark to enjoy the new snow. It was great. It’s pretty amazing what 10hr of sleep can do for a person. I felt great on every lap today and each climb was mentally easy, too. This wrapped up a not necessarily intended big week of training: 32h47min and 54,100′ vert.

In the spirit of the Superbowl, one of the podcasts I listened to on the hill today was a RadioLab episode on the history of American Football. Growing up in Nebraska, Huskers football was simply a part of life, so I’ve always had a probably higher-than-average literacy for the game, but since I moved away from Nebraska I pretty much stopped paying attention to any of the big team sports. This podcast was fascinating enough that when I got home from skiing I was inspired to actually pull up the big game streaming on-line and watch the whole second half, probably the first time I’ve intentionally watched any of the Superbowl in the past 15 years.

Simply because of Deflategate and the Patriots’ position as a bit of a dynasty, I found myself rooting for the Seahawks. (Plus, last year I remember being amused by Richard Sherman when Deadspin.com found an old college email of his where he exhorted his fellow Stanford dorm residents to “quit bitchin’ and fuckin’ adapt”—a piece of advice that I guess I generally tend to agree with despite my love of whining.)  So when the defining interception of the game occurred, I was surprisingly disappointed and as dumbfounded as anyone else.