Listed as an “endurance challenge” in Richard Rossiter’s excellent Rocky Mountain National Park climbing guide is the whimsically titled route A Walk In The Park. This classic outing starts from the Glacier Gorge trailhead and makes its way up and over Thatchtop, Powell, McHenrys, Chiefshead, Pagoda, and Longs Peak before descending back to the trailhead to complete the loop.

The ridges connecting all of these peaks are aesthetically sharp and technical with very sustained 3rd and 4th Class difficulties and more than a few 5th Class sections, up to 5.7 (specifically, the West Ridge of Pagoda). It is probably the preeminent alpine ridge scramble in Colorado—solid granite, unmatched scenery, relatively sustained challenges.

However, after my recent outings in the Sky Pond Cirque just to the north of Thatchtop, I’ve been conceiving an even more ambitious loop that would incorporate the classic and highly-rated 5.6 routes on Sharkstooth (the NE Ridge) and Spearhead (the North Ridge). Both of these routes/peaks aren’t directly on the continuous high ridge, per se, defined by Rossister’s AWITP, but in my estimation the quality of the climbing on these two peaks is so good that it’s a shame to pass them up in the course of a long outing that is emphasizing quality climbing on beautiful peaks. Call it A Walk In The Park Plus (AWITP+).

(As a side note, an even sexier addition would be a solo of the Petit Grepon’s South Face to kick off the whole thing, but with a 5.8 crux pitch and several pitches of steep 5.7, it would be a gratuitous addition that is quite out of character with the rest of the technical difficulties on Rossiter’s orginal AWITP. In my opinion, the sustainedly steep nature of Sharktooth’s NE Ridge already pushes the envelope of being in line with the rest of the loop’s technical challenges, but I also think the peak/route is just too darn good to ignore.)

Unfortunately, my right iliotibial band wasn’t quite as enthusiastic as the rest of my mind-body-spirit and I was forced to end my day after my ascent of Spearhead—completing the still-satisfying Sharkstooth-Spearhead enchainment—but disappointingly short of the planned, full outing (i.e., no Chiefshead, Pagoda, or Longs). The photos can tell the rest of the story. 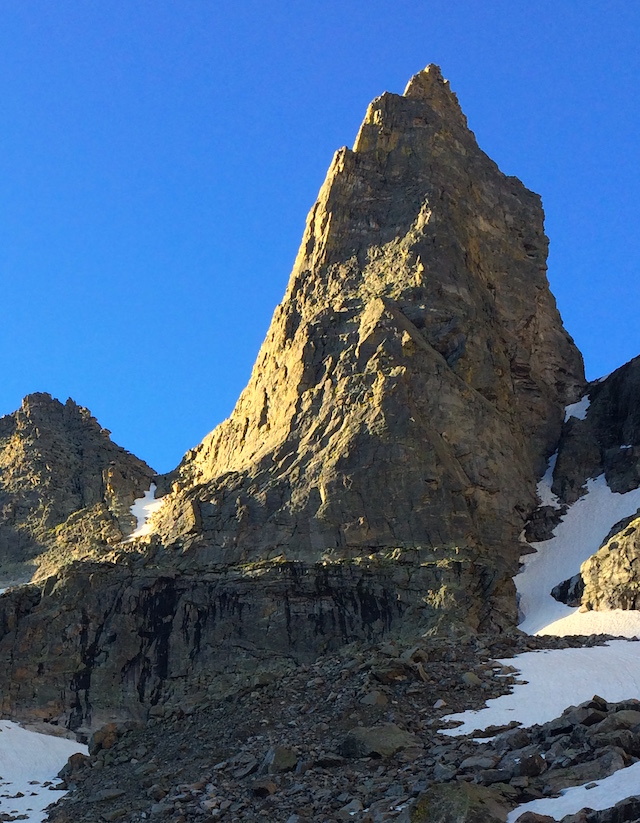 After running up the Shortcut trail to the Loch, a sneaky right turn takes you up Andrews Creek to The Gash near the Continental Divide and to the base of Sharkstooth’s imposing and inspiring profile. Here, the peak’s NE Ridge (left skyline) is catching the early morning sun as I approach its base via snowfields and talus hopping. 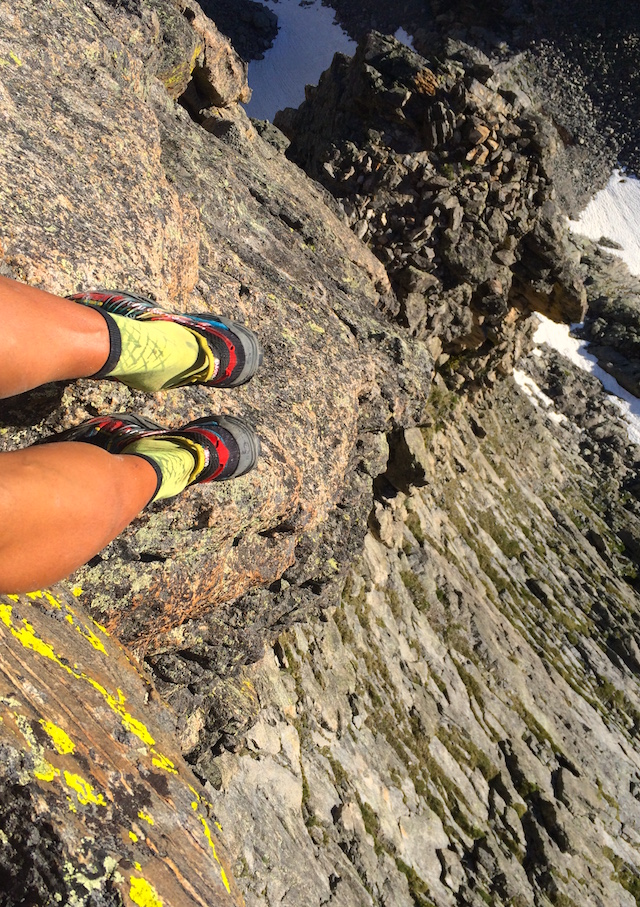 Although interrupted by a few giant ledges (one can be seen below, here), the NE Ridge of Sharkstooth is delightfully and sustainedly steep, especially considering the grade never exceeds 5.6. This consistency and spectacular position on the peak are what make it such an enjoyable route. Plenty of air beneath your heels, this ain’t no Flatiron slab ramble. 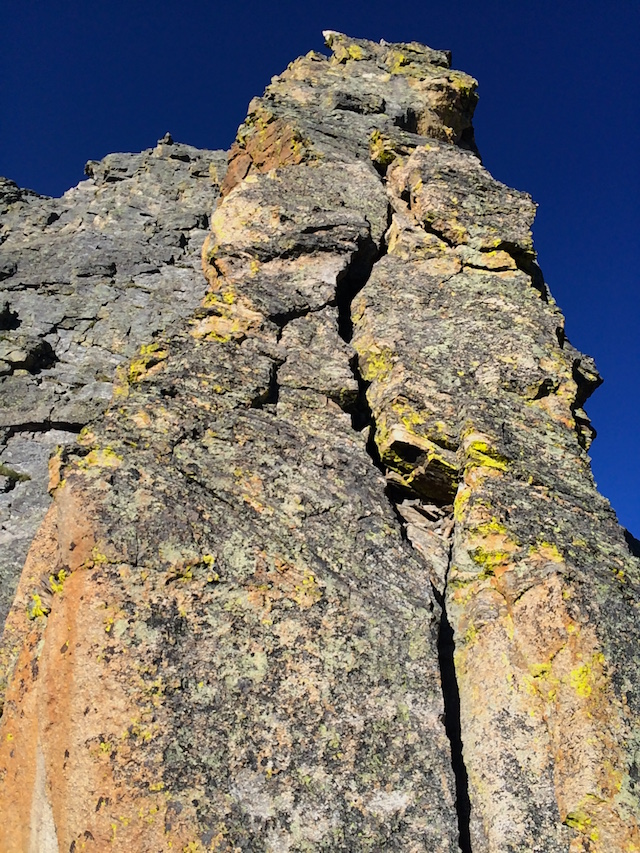 Near the top of the route, this distinctive off-width crack pitch provides a nice landmark for knowing that the summit is getting close. Fortunately, no OW technique is required and the crack can be climbed on the outside. However, one can see here how the width of the ridge is getting narrower and narrower as the route goes on. 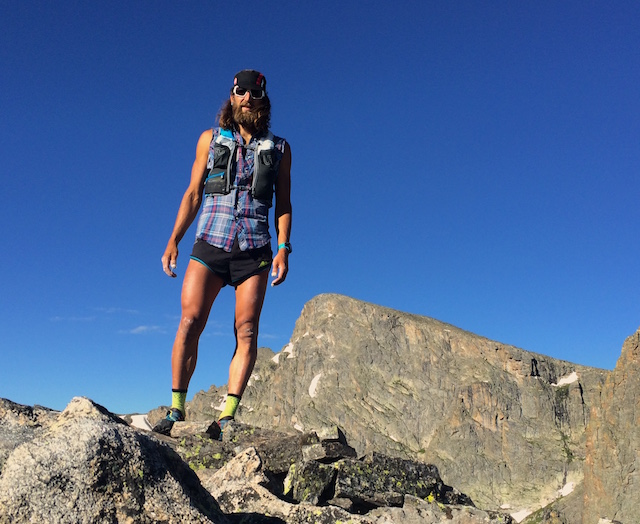 On the summit of Sharkstooth with Taylor Peak (and the Continental Divide) behind. I packed a chalk bag and rock shoes in my running vest as I’d previously always used both on this route, but on this day I was psyched that I never felt the need to remove them from the vest. Good to know that I can pack even lighter next time. 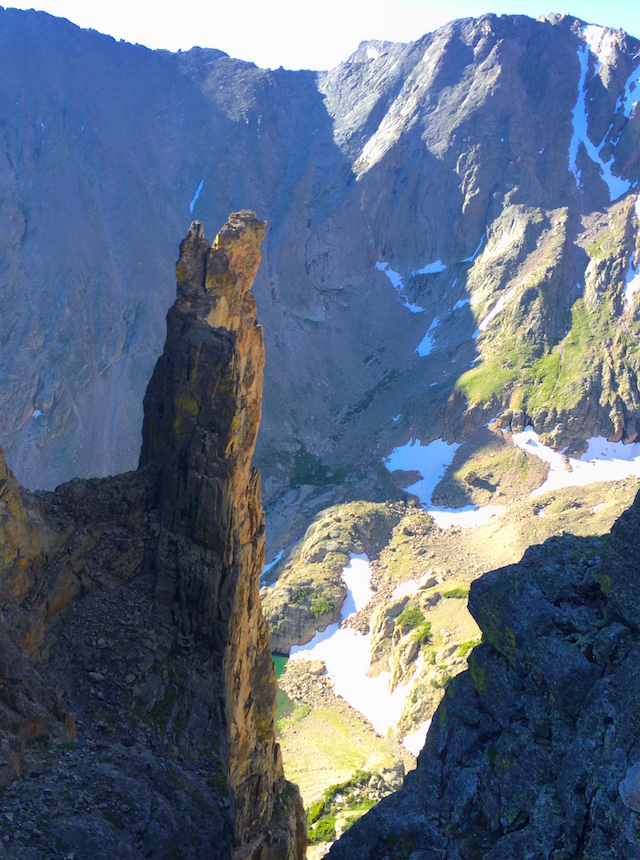 After downclimbing the East Gully route on Sharkstooth, one is deposited at the East Col—a beautiful pass separating the Tooth from the Saber and the back side of the Petit Grepon, as seen here. Beyond the Grepon, the steep route straight up the shaded gully that I’ll use to gain the spectacular northeast ridge of Powell (skyline) can be seen.

From about half-way up my steep hike up to the northeast ridge of Powell, I turned around and snapped the stunning vista behind me—Sky Pond itself and the Cathedral Spires, including the Stilleto, Sharkstooth, the Petit Grepon, the Saber, the Foil, etc., etc.

When I finally topped out on the wave-like northeast ridge of Powell, much of the rest of my route was laid out before me: McHenrys Notch (the steep snowfilled couloir), McHenrys Peak, Pagoda and Longs (Spearhead and Chiefshead are hidden behind McHenrys). 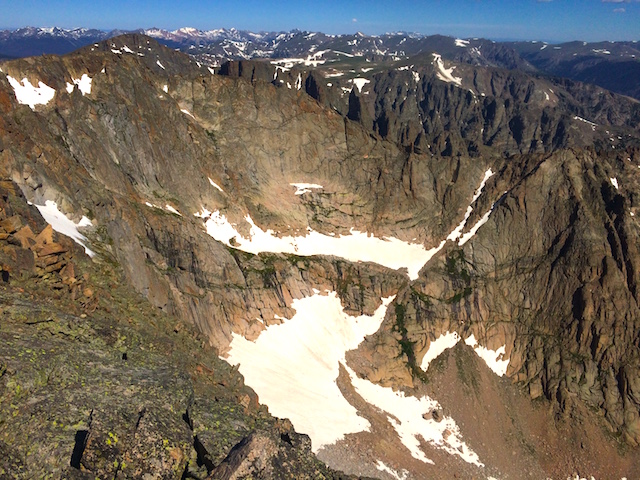 After scrambling over Powell, down into McHenrys Notch, and finally up to McHenrys Peak itself, I was treated with this view back to the impressive northeast ridge of Powell and the tips of the Cathedral Spires poking up behind. 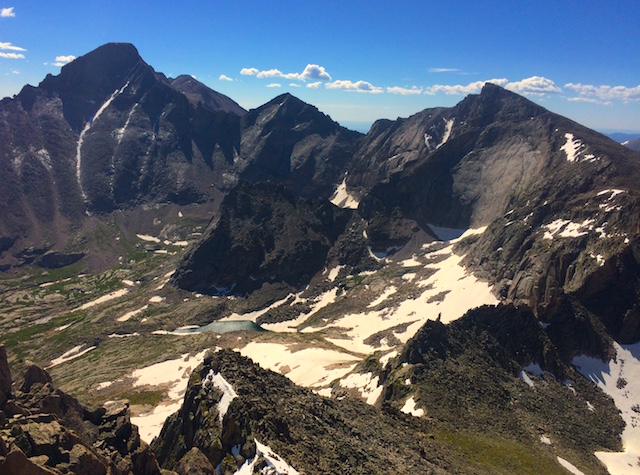 Also from the summit of McHenrys, looking in the opposite direction, the rest of my planned route is now visible. I would drop down the ridge to Stoneman Pass (with the Stoneman spire itself visible), traverse across the snow to the base of the north ridge of Spearhead (dark peak directly in the center of the basin) climb its North Ridge, and ideally continue up to Chiefshead (right) and finally over to Pagoda and Longs. So much good scrambling! 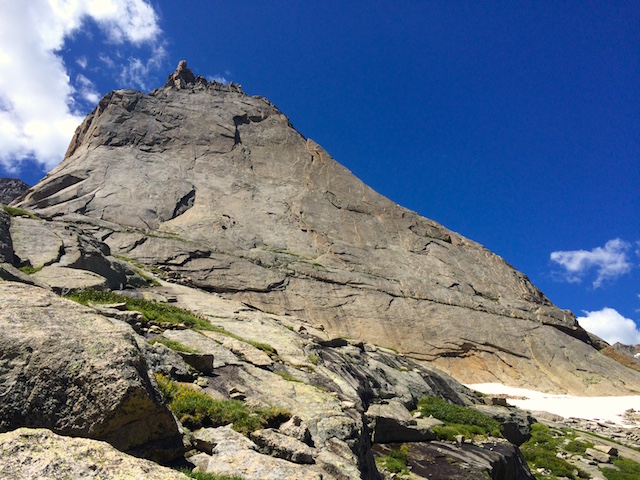 Unfortunately, after scrambling the North Ridge of Spearhead (right skyline here), and traversing to the saddle between it and Chiefshead, my right knee forced an early exit back to the car via the Glacier Gorge trail. A full completion of the loop would have to wait another day. I’d reached the summit of Spearhead in a little over four and a half hours, and based on a previous outing, completing the circuit would take another three and a half hours or so. Next time, hopefully. This photo features Spearhead’s beautiful northeast face, which contains many classic climbs, including the Barb and Syke’s Sickle, both completely visible here. 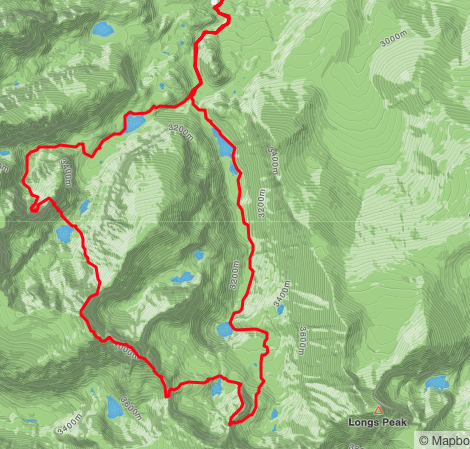