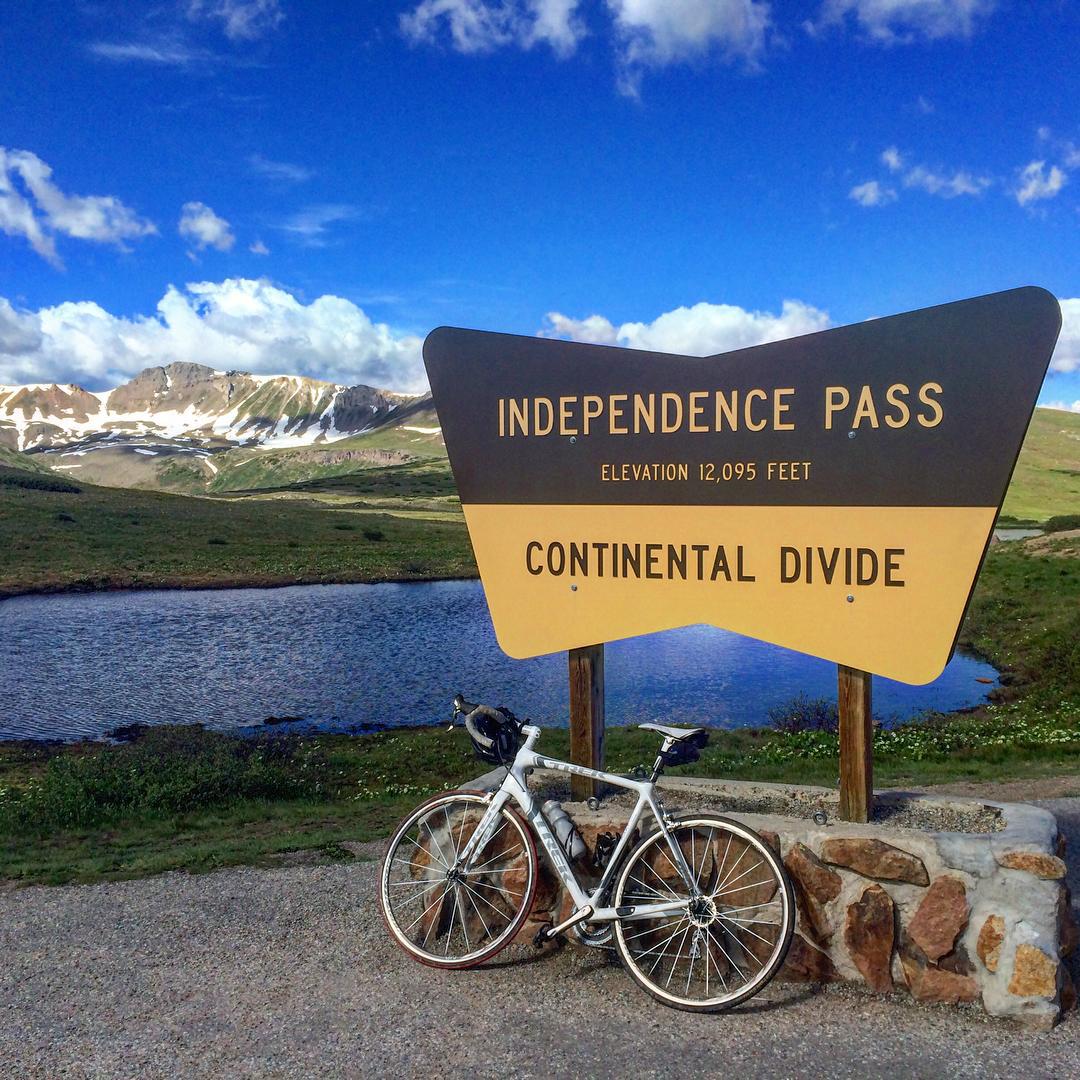 Last weekend I drove down to Silverton to spectate at the Hardrock 100. This was my sixth year at the event, but the first time that I wasn’t on some kind of crewing or pacing duty. I am a bit ashamed that it took me until July this year to venture into the the magical wonderland of high mountains that is Colorado beyond the Front Range, but it felt like this prolonged absence only intensified my amorous feelings for the majestic landscape. What a gift.

After a cold and rainy but otherwise truly fantastic few days mostly just hanging out with friends and taking in the scene, I headed back towards Boulder, but stopped off in Twin Lakes on Saturday night so as to be properly positioned for a bike ride (up, over, and back) of Independence Pass the next morning.

The ride went really well—better than expected, actually, with perfect weather—but mostly it got me thinking about other experiences I’ve had on Independence Pass. With Hardrock so fresh in my mind, the most prominent memory was that of a run I did up there with Kyle Skaggs in early September 2008, only a couple months after his paradigm-shifting run at that summer’s Hardrock.

Kyle and I lived together for the first six months of 2008, during which time we both became New Balance Outdoor Ambassadors. Trailrunner Magazine was penning a feature story about new, young talent in the sport at the time, so they asked Cliffy to do a quick photoshoot with us for the piece. I had spent the whole second half of the summer off from running with a neuroma in my foot, but I was living in Leadville working in the coffee shop there and Kyle was just finishing up his summer of alpine hydrology field work down in the San Juans. Conveniently, NB had a running media event down in Boulder (a trip during which I would take my virginal run up Green Mountain) that they wanted us to attend, so Cliffy (who is based down in Aspen), Kyle, and I decided that 12,100′ Indy Pass made the most sense as a middle-ground meeting area for the shoot. 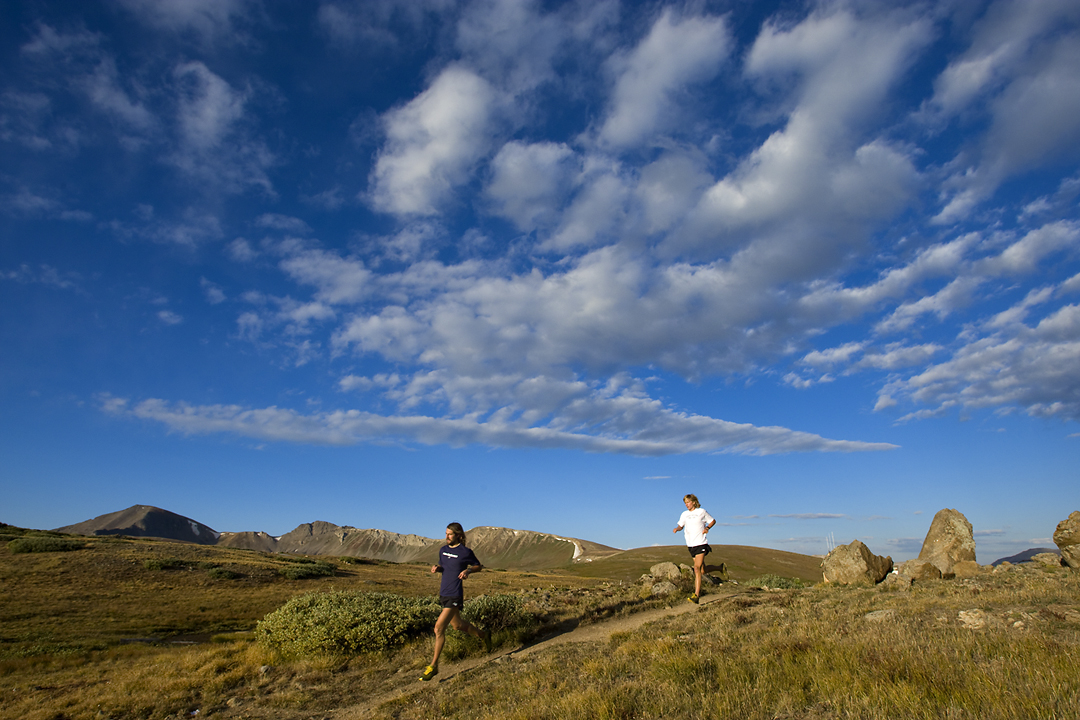 After some quick sunrise snaps, we pushed Cliffy’s newborn baby in the stroller back to the parking lot and then decided it made sense to get in a run, given our spectacular alpine location.

The run was pretty typical of the kind of thing Kyle and I were into at the time: high, mountainous, a bit of adventure, finish off with a strong effort. We started out jogging along some singletrack to the ridge behind us in the photo; stubbornly stuck to a running cadence even as the path ramped up and we broached the 13k’ mark; begrudgingly fell into a scrambly hike as things turned to crags and talus; scoped the meager, late-season dab of snow that you see in the saddle on the ridgeline; skittered down some sketchy glissading, transitioned into some off-trail descending action that eventually deposited us on the road, 1000′ feet below the pass; and then proceeded to wordlessly hammer the living shit out of each other on the 15min of pavement climbing back up to my truck.

I wasn’t particularly fit as I had been only running for a week or so after taking the previous couple of months off; Kyle was already beginning to feel the effects of the post-Hardrock overtraining malaise that would ultimately precipitate his exit from the sport, but we were young and zealous and neither of us would ever back down from a challenge, however implicit and unspoken. My training log entry from that run notes, “Kyle and I need to get better at running easy together.” It was a fantastic way to start the day and also one of the last two or three real runs I would ever do with Kyle.

After our trip to Boulder, Kyle drove back down to Silverton, packed up most of his belongings (I say “most” as one Hardrock Champion’s Trophy was conspicuously left behind in his Silverton rental), and then turned right around and drove back up towards the Front Range.

Alas, just outside of Buena Vista he crashed his trusty Toyota stationwagon into a hapless deer in the rainy dark and called me for a rescue. He packed what he could fit into a duffle bag and a carry-on, left everything else (except his CD collection, which I salvaged) in the totaled and now abandoned Deer Slayer (a name that had been bestowed upon the vehicle previously—this wasn’t the first deer with which it had collided), and bedded in the Roost with me that night (roomier than you would think). The next morning I drove him over to Frisco (still raining, now with fresh snow on the peaks) where he caught a bus down to DIA for a flight to Ashland, OR (where I would follow a couple months later).

That was our final adventure in Colorado, and certainly the last running Kyle ever did here. People always ask, “what do you think about while running?” (or, as the case was here, biking). That’s what I was thinking about while biking Independence Pass last weekend.