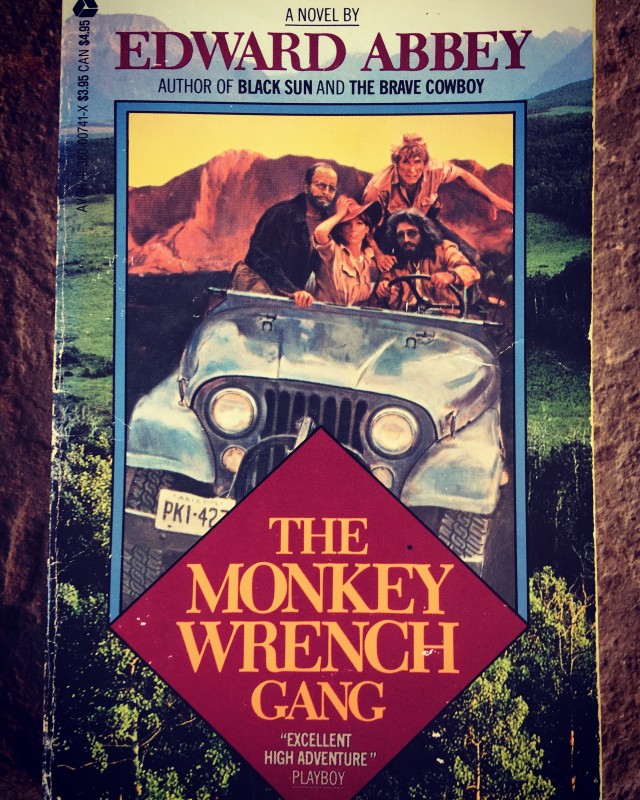 Questions like, “What book (or band, or author, or artist) has influenced you the most?” tend to make me hate myself because, inevitably, I start worrying about how my answer makes me look or sound. Does anyone answer these things honestly? It is my suspicion that everyone thinks about how they want to be perceived, which peer group they want to be associated with, and then answers accordingly. Usually with something contrivedly hip, intellectual, quirky, interesting. (I remember when Facebook started in 2004-ish—back when it was limited to college email addresses only—all of my friends’ profiles were rife with this bullshit. And mine was, too, for a certain while.)

The problem with the “which book has influenced you most?” question is that—if we’re being totally honest—we don’t really get to decide what influences us. It seems to mostly be a function of whatever we happened to be exposed to during the most formative years our lives. And what involuntarily resonated. Sure, I can, for instance, want Camus or Sartre to really affect me (and, in college, when pursuing a Philosophy degree, I really wanted that), but it won’t last, or translate to action, if it’s a mere contrivance.

As such, for most of my life I’ve resisted what I’ve pretty much always known to be true–Edward Abbey’s The Monkey Wrench Gang is the book that has had the biggest impact on my orientation to the world. Nothing else really even comes close.

The problem is that this has always felt cliché to me, probably because when I was in college my group of friends and acquaintances were all pretty onboard with the radical environmentalist subject matter. Ed Abbey is such a cult figure that amongst a certain crunchy college crowd citing The Monkey Wrench Gang as influential felt like saying Fight Club was your favorite movie or Radiohead your favorite band. Duh. You’re in college. (Now, solidly in my 30’s, I can confidently say that both of those hold up just fine, however.)

What I realized this past week out in the desert of southeastern Utah, however, is that my history with TMWG does, in fact, run a bit deeper than your average teenage pseudo-intellectual. Or maybe I’ve just finally gained enough perspective to not need to come up with something ridiculous and obscure to feel unique in my identity (not that Camus and Sartre are either).

Aforementioned history: My first exposure to Ed Abbey was when I was nine years old, in the summer of 1993. Every summer my family would take a one- to two-week car camping trip around the American West, visiting its many National Parks and attendant natural wonders, going on long day hikes, building campfires, sleeping in a tent, cooking on a Coleman stove. The battle against road trip tedium came in the form of my mom reading a book aloud while my dad drove and my two sisters and I sat crammed in three abreast in the back seat. Old school version of an audio book, I suppose.

Mom and Dad always selected titles that were thematic to the region we were visiting—Annie Dillard’s The Living when we visited the Pacific Northwest, James Michener’s Texas when we spent an entire week in…Texas. The summer of 1993, our focus was the Desert Southwest—Arches, Canyonlands, Zion, Bryce, and the Grand Canyon. Canyon Country. Abbey Country. The Monkey Wrench Gang was the entertainment.

And, holy shit, what entertainment. For those not familiar, a quick synopsis: A merry foursome of—let’s not sugarcoat it—eco-terrorists traipse around the canyon country sabotaging various road, bridge, and dam construction projects that they deem sacrilege to the once pristine desert landscape. Hydraulic hoses are snipped, fuel tanks filled with sand, bulldozers driven off cliffs, explosives detonated. It’s rollicking, it’s ribald, it’s fantasy.

The hero/anti-hero of the group is the uncompromising, hirsute, profane, semi-alcoholic, 25 year old ex-Green Beret, Vietnam vet George Hayduke. Hayduke is a paradox—obviously a radical environmentalist, but devout in his defiant littering, for instance. With his Green Beret experience, he is the token demolitions expert and firearms afficionado. Hayduke is committed to the cause—he’s young, with no responsibilities to anything but himself and the desert, and he seems to have a kind of insatiable hate in his heart that motivates his actions. What’s not to like? At nine years of age, he was my idol. (And probably still at 19, for that matter.)

So much about that book was the seed for what came later in my life. Perhaps most notably, and somewhat oddly, it was my first real exposure to the fascinating spectrum of outdoors skills. Hayduke is the consummate self-reliant outdoorsman. All-night enduro-marches with a 60lb (?!?!) pack were par for the course to get the job done and evade authorities. Rappelling off cliffs, drinking from slickrock potholes, sleeping under the stars, navigating in complex terrain—Abbey describes Hayduke doing it all and I wanted to do all of it. In that initial reading, my mom conveniently censored (most) of the cursing and sexual innuendo. Hayduke is a highly problematic hero.

Throughout elementary school, my parents went through the motions of educating me in the Catholic Church to appease a grandmother. But when it came time to be confirmed in the Church in the 6th grade (and thus ending my having anything to do with it) I already had a skeptical irreverence towards the whole thing and a keen sense of the performative quality of it all. When I picked a Confirmation Saint, it was an easy choice—Saint George.

The Monkey Wrench Gang culminates in an epic chase/manhunt scene where Hayduke escapes into a mythical and enigmatic landscape—The Maze. He uses this truly forbidden wilderness to stage his disappearance and evade capture. Despite such fascinating mystery, in the past 25 years I’d never done anything more than gaze at it from the high overlook of Grandview Point in Canyonlands’ Island In The Sky, or from across the Green River chasm while biking I-Sky’s White Rim Trail.

Last week, on another biking excursion with my friend Buzz Burrell, I finally got a little bit closer…but only a little. We technically traversed the Maze District of Canyonlands National Park in a north to south manner from Green River, UT to Hite Marina over the course of a couple of days. Pedaling all day, sleeping under the stars at night, and frequently approaching the rim to have a good look, but never actually descending into the labyrinth beyond the infamous Flint Trail drop down to the Golden Stairs (bikes aren’t allowed on hiking trails).

Buzz, however, has extensive experience on foot in The Maze (this is an understatement), and with all of the landmarks right there in front of us, all of his tales of adventure (finding 5th-Class sneaks through cliff bands that cut off miles/hours of foot travel, swimming the Colorado River at night without a life vest, etc., etc.) suddenly made a lot more sense and I came away inspired to return one day for a more intimate experience down in the canyons and fins.

Even more importantly, however, the terrain that we traversed under our own power on two wheels—The Flint Trail and its attendant landmarks—all figure prominently in The Monkey Wrench Gang. Finally having all of the insane theatrics in TMWG that had so influenced me 25 years ago brought to life amidst the desert canyons and spires was a more important experience than I had expected. Connecting the dots of that initial book reading to all of the stuff I do with my life today was a reaffirmation of the power inherent in landscapes and literature. Thanks for the tour, Buzz. 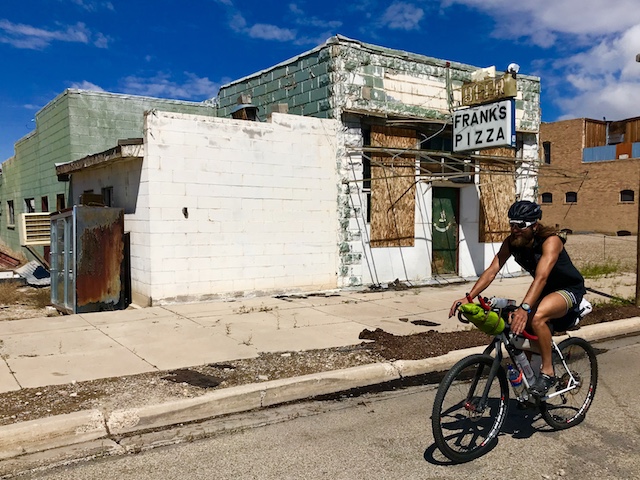 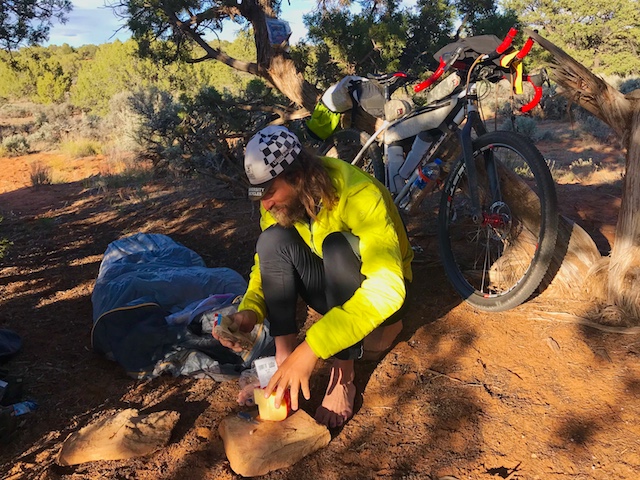 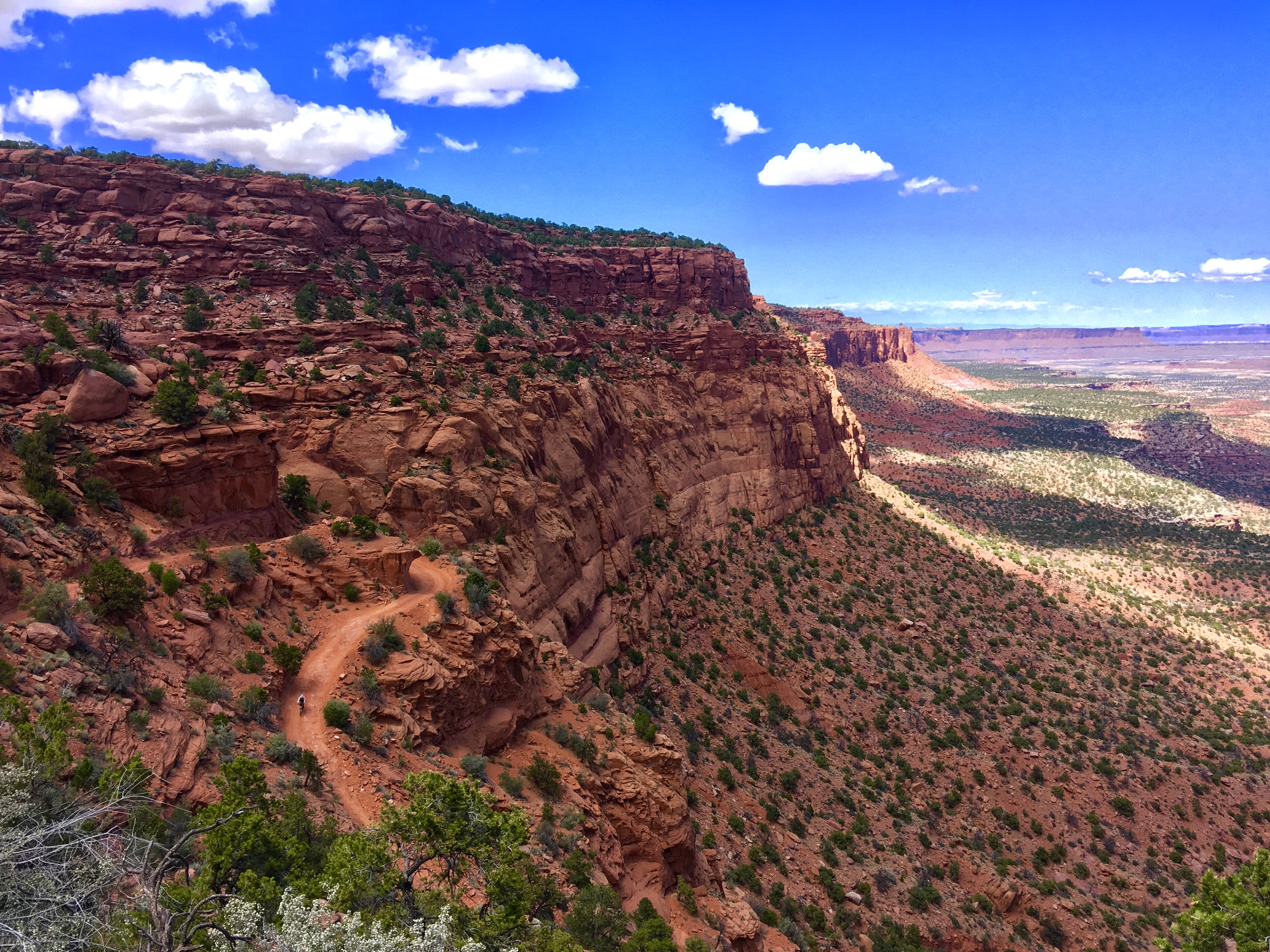 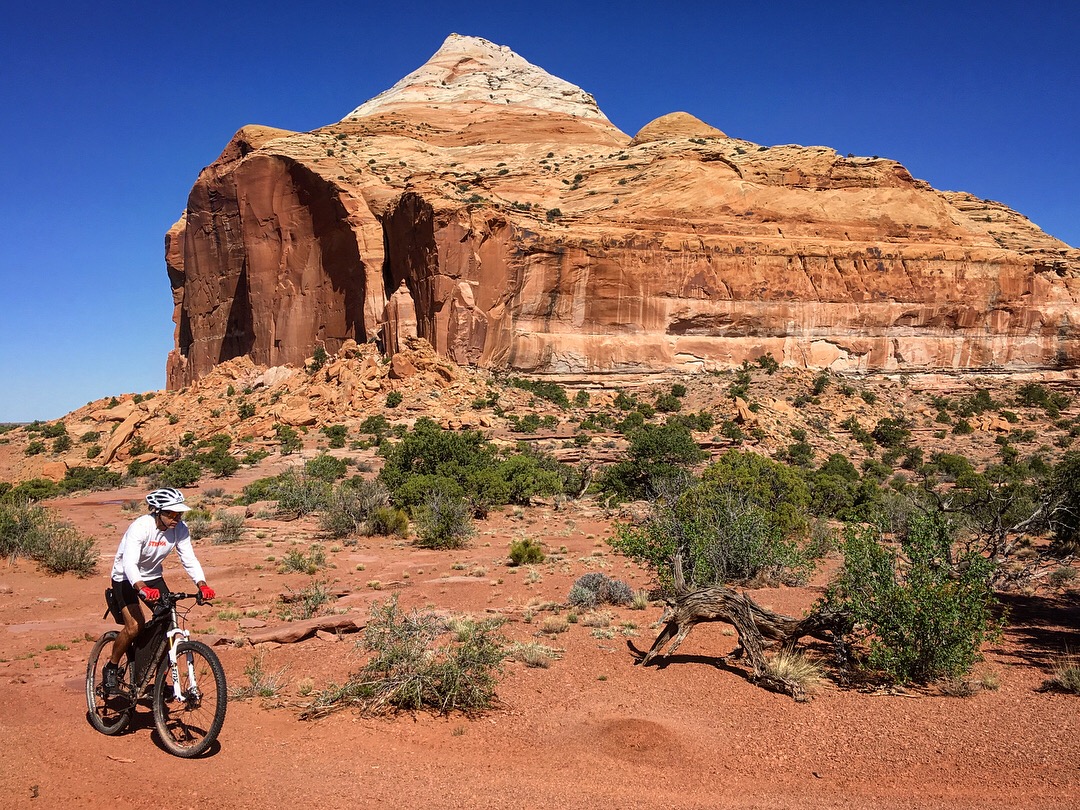 Buzz on our out and back to Cleopatra’s Chair, the monarch of landmarks in Canyonlands. 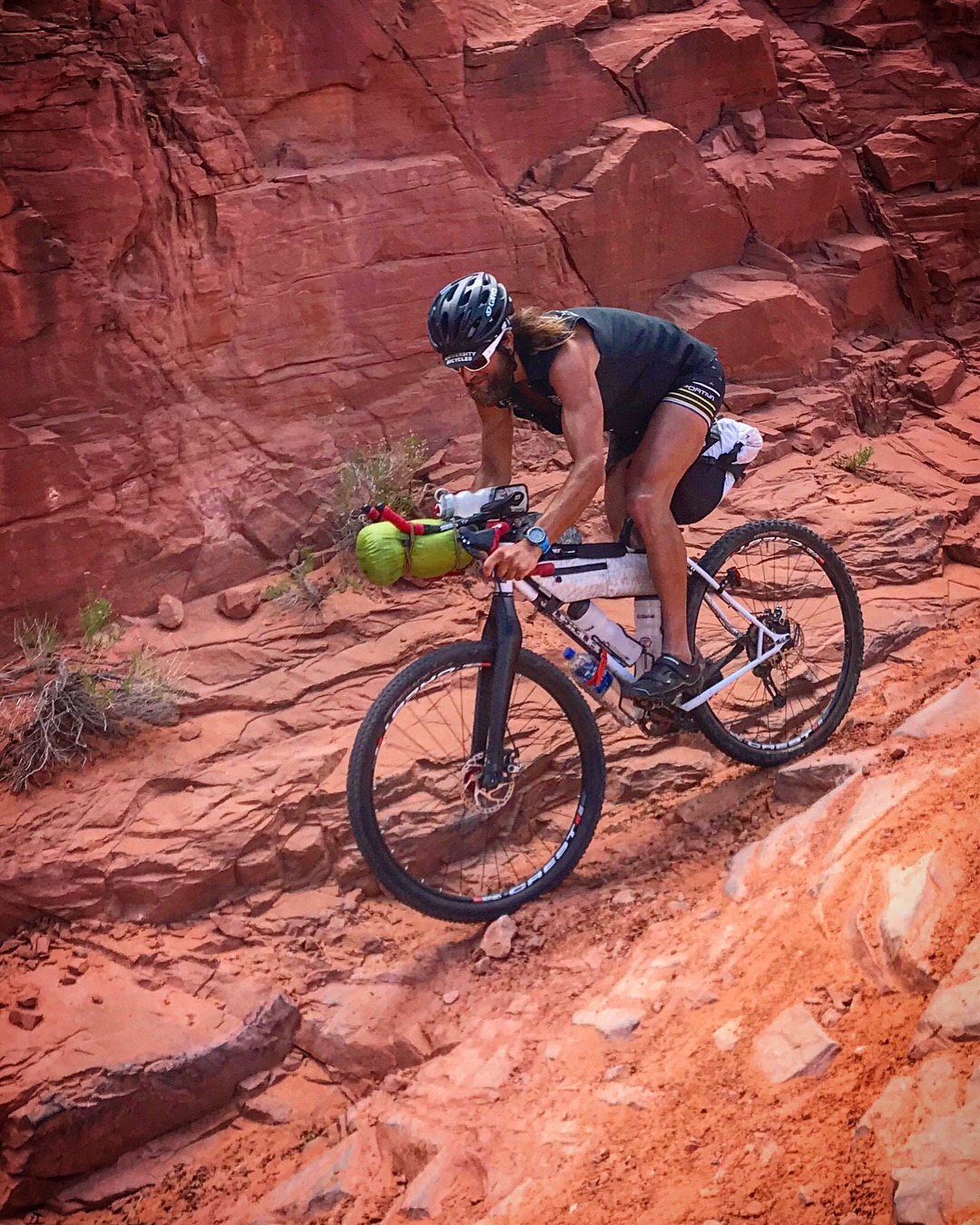 Buzz explaining secrets of The Maze atop the Golden Stairs. 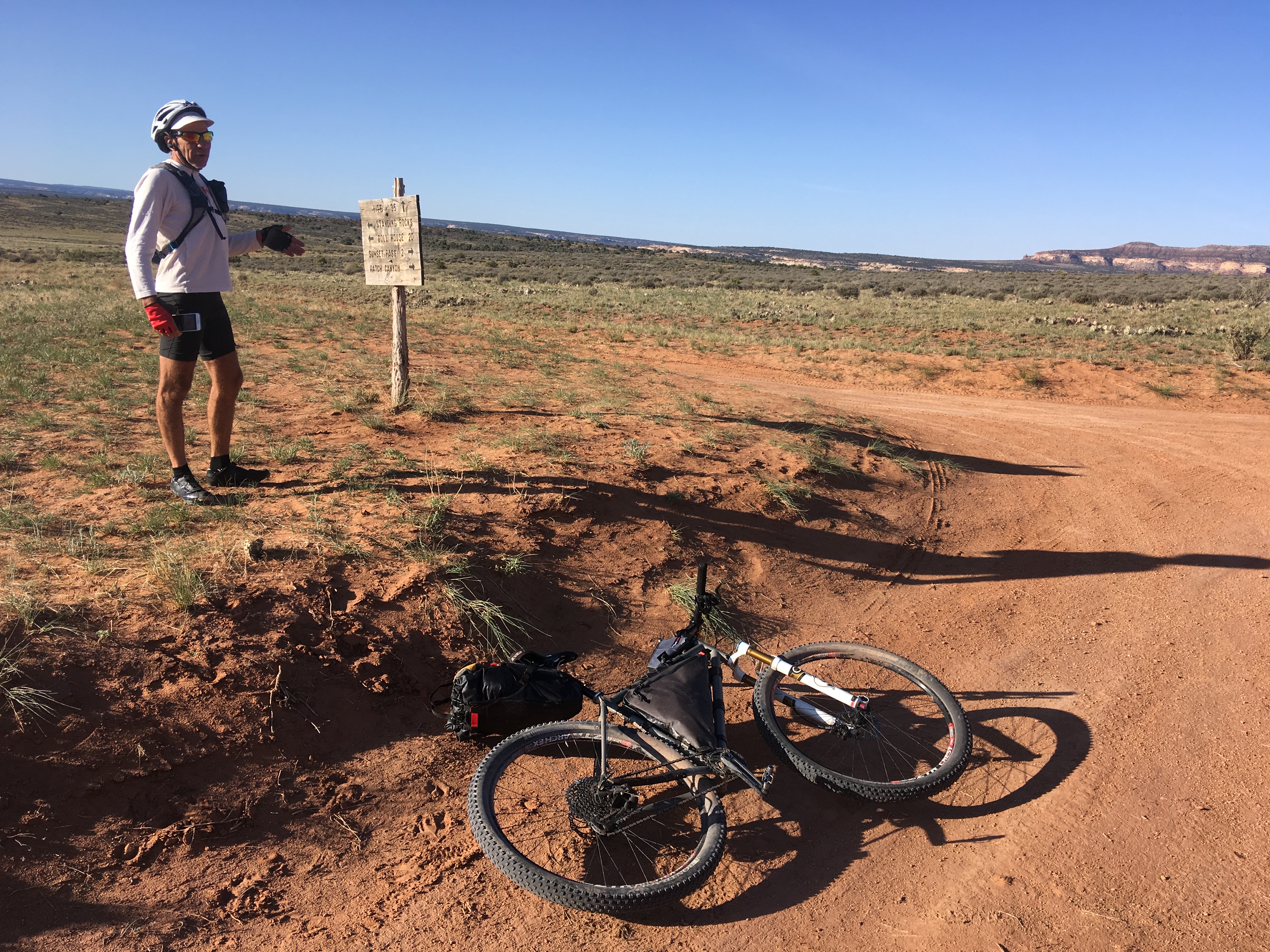 I’m almost certain this is the intersection where Hayduke and Seldom head up the mesa when being chased by Bishop Love and Hayduke rolls a boulder down onto Love’s Chevy Blazer. 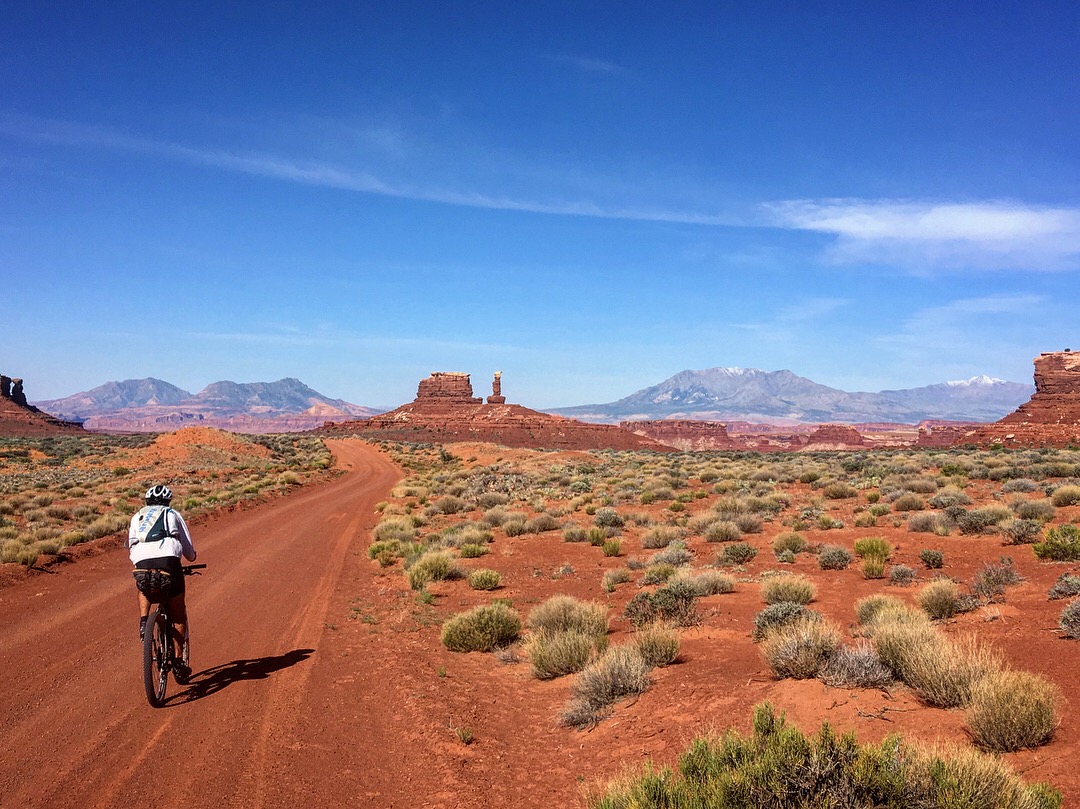 Buzz on the final road out to Hite.

On the third day of our trip, I eschewed a car ride from Hite back to our start point in Green River and instead elected to ride my bike 103mi back on the highway, after biking 40mi of gravel that morning. I’m not sure why. Some sort of misguided ethics. A certain desire for a long day in the saddle. Either way, it was hot, and the first 28mi or so were all uphill. My bike was heavily loaded (as seen here), and 2″ knobby tires at 25psi on pavement aren’t super efficient. I stopped at this picnic area for an energy bar lunch in the shade. Less than 10mi later, Buzz and his partner Nini drove by on their way back to Green River and we had a ridiculous, impromptu, lovely picnic lunch under a cottonwood tree on the side of the road. With another 80mi still to go, it totally saved my day. Plus, the climb finally leveled off. Riding bikes is fun.

The next day I woke before the sun and rode my bike for 9hr around Island In The Sky’s classic White Rim 100mi loop. What a great ride. Here, Washer Woman Tower provides a notable landmark at approx 75mi.

26 responses to “The Monkey Wrench Gang, Bikes, Buzz, and The Maze”