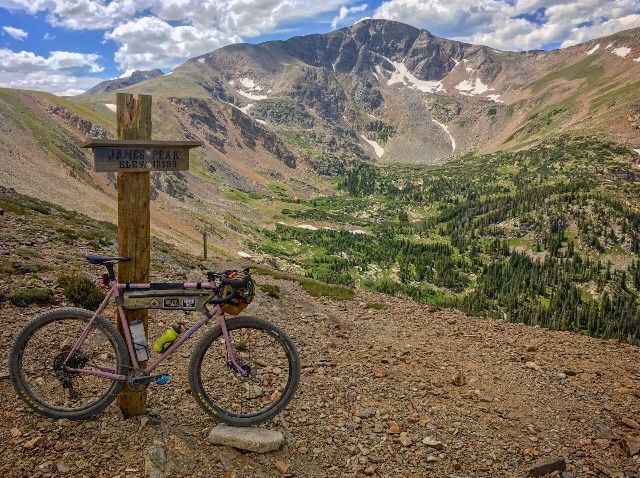 Click around the Crust Bikes website a bit and you’ll see CEO Matt Whitehead describe one of his frames (the ever-popular Evasion, to be specific) as “a randonneur bike on steroids, the Satanic Rando, if you will.” What?

Matt continues, “Comfortable for the long haul, but fast and nimble, while still being ready for some pretty technical/rough riding.” Hmmm…I like the sound of this.

In my world of outdoor pursuits, the terms “Satan” and “rando” already carry heavy connotations, specifically in the arenas of Flatiron speed scrambling (“Satan’s Minions”) and ski races that involve skiing both up- and downhill (randonnée or “rando”, or the now more widely popular “skimo”). The internet tells me that “randonnée” and “randonneuring” can be defined broadly from the French as a simple “hike, excursion, a ramble,” but also with the more specific implications of up/down hill skiing and long bike rides. What a swirl of fun stuff to do outside!

I, for one, particularly enjoy the quasi-tongue-in-cheek use of “Satan’s Minions” as reference to my group of friends who like to climb Flatirons quickly, but there is no denying that there is an underlying, elemental aesthetic when it comes to outdoor activities that defines this group. To wit: efficiency, being competent and quick, knowing the basic rules of safety and risk assessment in the mountains thoroughly so as to be comfortable and skilled enough to bend said rules, generally in the name of covering more ground in a given amount of time, in better style. There’s a slightly subversive, DIY element to all of this, too, i.e. you won’t be taught these tactics or techniques by any mountain guide.

My interpretation of Matt’s “Satanic Rando” shares similar themes. (And, to be clear, I’m taking this term to be fluid and open to interpretation, like, say, a good song lyric.) For instance, a ride I did last week on my Crust Bombora could be defined perfectly by Matt’s description. From my doorstep, I covered a loop where the first 60 miles were almost entirely off-pavement, and for much of it the going was, indeed, pretty rough. Old mining roads repurposed primarily as 4WD routes have a tendency to get that way. This particular route looped all the way up and over a 12,000′ ridge before it descended back down to pavement…but then I had to get home.

This is where my choice of the Bombora really started to make sense. Sure, a proper mountain bike would’ve been a far better tool for all of that chunk, but the copious climbing to access it would’ve been made even more laborious and then the ensuing 60 miles of pavement I rode to get back home would’ve been a nightmare with upright trail geometry and squishy, heavy suspension.

Instead, the Bombora’s combination of snappy, road-ish geometry and drop bars and clearance for a 27.5″ x 2.25″ fast-rolling mountain bike tire (what?!) was the ideal rig for such a varied outing. Sure, this is most certainly not everyone’s cup-o’-tea. But that’s mostly just because not enough people are riding weird bikes.

In the mainstream industry, bikes have typically been highly specific. It’s easier to compartmentalize certain types of biking—pavement, dirt; day rides, tours—into their respective silos. And when the industry’s similarly silo-ed types of bikes are used for each task—road bikes are aggressive with skinny tires, mountain bikes have suspension and knobby tires—one is almost forced to stay stuck within the confines of those compartments. This is why you see so many people either zipping around on their carbon rocketships with lycra/aero-everything and 25mm rubbers or getting shuttled to shred downhill laps on their long-travel enduro sleds.

But, circling back to the Satan’s Minions, your average climber also isn’t interested in, nor comfortable, simul-climbing, scrambling/soloing easier approach pitches, downclimbing when a rap station is available, running the approaches and descents, or, gasp, biking to the day’s objective. All regular fare in the Minion world, and why this group is such a valuable resource for finding like-minded climbing/adventure partners. I love it when “climbing” isn’t necessarily strictly climbing.

There’s a hilarious quote from winner Lachlan Morton in a video of this year’s inaugural GBDuro—a bikepacking race that spans the UK–during a particularly heinous bit of hike-a-bike: “…this is not bike riding.” Exactly. That’s what makes it so interesting.

At the end of the day, it’s not about speed and definitely not about specificity. It’s about–of course–having fun, covering a wide variety of ground efficiently, emphasizing the movement and the activity, and, perhaps, most alluringly, thinking outside the box and bringing creativity and a bit of a rule-bending to one’s passions.

In all of these activities—climbing, scrambling, biking, skiing—the objective for me is always to find that fleeting moment where what I’m doing feels improbable—sometimes irrational even—and, as a result, a bit infused with magic. The right mindset and the right tools help facilitate that. And when it comes to bikes, the concept of “the Satanic Rando” and the brilliantly oddball frames Matt brings to reality fully embody that.

20 responses to “The Satanic Rando”