12-26-2011
Mon-AM: 0:10 ~ Home Pastures in Nebraska
Shin was twingy so I didn’t push it beyond more than this with running and then wasn’t motivated to seek out any legitimately steep hiking terrain.

12-29-2011
Thu-PM: 1:22, 2500′ ~ Green Mt.
Up and down 1st Saddle. Got out in the dark after a long day of driving back to Boulder from Nebraska. Really warm evening, but there was some crazy wind up on the NE ridge and the summit. Great to get back on the hill after a few days away, but pretty wild how much snow has melted.

12-30-2011
Fri-AM: 4:00, 6000′ ~ Mt Belford & Mt. Oxford
Missouri Gulch TH via NW Ridge w/ Jeff and Homie. Balmy upper-30s at the trailhead were contrasted with some fairly significant winds (50+ mph?) on the summits and the saddle between the two peaks. Hiked well on the uphills but could definitely feel my lack of altitude acclimation. Ran the downhills and flats and enjoyed pounding the quads on the final 4mi/4600′ drop back to the trailhead (including the mile down the NW ridge that loses 2200′) off the summit of Belford. Shin held up well, helped by the mixed snow/talus/scree conditions. Awesome day with some great mountain folks. Hardrock training commences!

12-31-2011
Sat-AM: 1:26, 2800′ ~ Green Mt.
Up and down 1st Saddle. Awesome morning. I ran to the base of Amphitheater, marched to the top, and then ran every step back to my door, all without protest from the shin. It’s crazy to me how the right amount of activity heals this thing, but too little or too much makes it unhappy.  More crazy Chinooks up on the NE ridge this morning.
PM: 1:21, 2500′ ~ Green Mt.
Up 3rd access and down 1st Saddle, all hiking. Locked bike at the usual spot by Gregory but then hiked over to the Third.  Legs felt really good and spikes were gripping well on the super icy trails; nearly lost an eye on an errant tree branch, though. Made it half-way back down the mountain by moonlight but eventually relented and switched the headlamp on. Really fun outing.

I was visiting my parents in Nebraska the first half of this week, and while there the shin seemed to be frustratingly touchy.  I say “seemed” because I’m now fairly certain that complete rest isn’t the best thing for it.  While with each day off (“off” being a relative term; each day I still got out for a couple mile stroll around the farm and other rigorous physical activity in the form of firewood-making with axes and chainsaws) my shin seemed to only worsen, when I returned to Colorado on Thursday the return to focused intensity and duration of hiking/running seemed to only make the shin feel better and better.  This is a pattern I’ve noticed with it before; the trick now is to carefully monitor and limit my progression.

In terms of stats, 2011’s numbers were severely limited by all my non-running due to injury (shin periostitus, broken fibula).  Mileage was only ~40% of 2010, but all of my steep hiking this year is reflected in the fact that in 2010 I only averaged 175’/mi while I bumped that up to 266’/mile this year.  Even with all my time off I still managed a Green summit on average of nearly every-other-day; I was quite surprised to realize that I didn’t top out on SoBo a single time in the past calendar year (nor visit Shadow Canyon, sadly).  I surely hope to rectify that in 2012.

Friday’s foray into the high country was just what I needed.  I’ve sorely missed the big mountains over the past 18 months and I really look forward to making them an increasingly bigger part of my weekly outdoors activity as I build my fitness for Hardrock over the next six months. 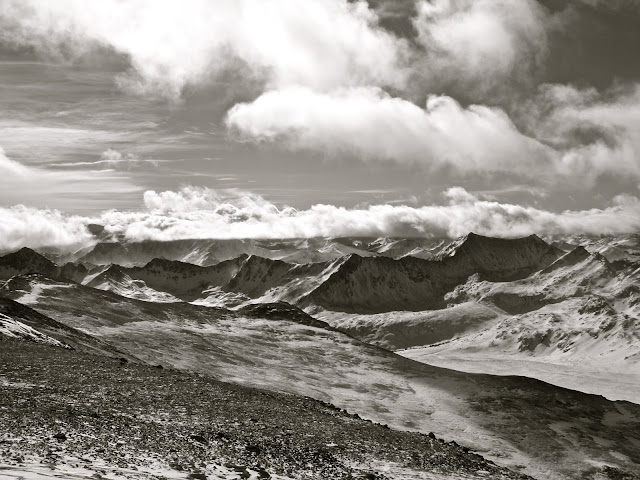 Probably not for everyone: