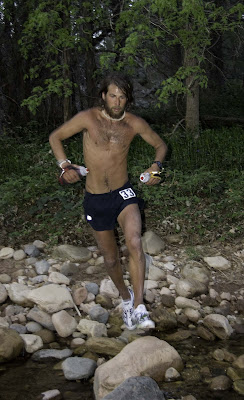 First off, the Highline Trail is 51 miles; and that last mile counts.

As long as I’ve been aware of ultramarathons, Zane Grey has been a race that I’ve wanted to do. While I feel that its self-proclamation of being the hardest 50 miler in the country isn’t quite accurate (San Juan’s climbing and altitude trumps the rocks of ZG, I think) it is probably the 2nd hardest and it has an infamous and historic point-to-point course that has attracted a lot of the country’s top ultrarunning talent over the years. So, with a classic course and plenty of previous time standards to test myself against, I was lured in.

About 10 days before the race, Kyle and I went down to Pine, AZ (the starting point) to check out some of the course. After doing an out and back 25 miler from the starting line my emotions ranged from, on the way out: “My God, this is some kind of sick joke to hold a race on this pathetic, sorry excuse for a trail” to, on the way back: “I don’t know, this is actually kind of fun…” With that introduction, though, I’d decided I’d seen enough.

Zane Grey was under new directorship this year. Perry Edinger stepped in to keep the race alive, and–much to my appreciation–decided to do what he could to invite and accommodate some top runners to this year’s race. As a result, I was looking forward to running with some of the East Coast’s finest–Bradley Mongold and Eric Grossman–along with former race winner Josh Brimhall. As it turned out, though, Grossman wouldn’t be able to make it out because of a re-aggravated hamstring injury.

After much debate, I decided to not wear a headlamp for the race and was glad I didn’t. Even with a 5am start, Arizona doesn’t follow daylight savings time, so the sky was already lightening when Perry sent us on our way. I took the lead from the first step with Josh, Bradley, and James Bonnett right on my heels. Strangely, there didn’t seem to be any flagging at all the first 17 miles of the course, so in the first few miles I relied on Josh’s prior course knowledge–and my small preview–to keep us on the right path.

After a mile or so, Josh took over the lead, but then I was on point as we began the first substantial climb of the course. I remembered it being steep the week before, but race adrenaline made it seem not so bad. However, I definitely think I was a bit too aggressive for such an early point in the race. On the entire run over to the Geronimo aid station at mile 8 I felt awkward and uncomfortable, even though I was leading and setting the pace. The extra bulky shoes (Brooks ST Racers) I was wearing to protect my bruised foot just plain sucked. The extra midsole height provided padding and protection but it also drastically reduced my proprioceptive feedback, responsiveness in my footstrike, and ankle stability. Plus, they were a half-size too big. So it goes.

Not only did the shoes feel awkward, but I just felt like I was kind of forcing the pace, which is not the way I like to run so early in such a long race. I had a (very) small gap on Josh and irrationally I kind of wanted to maintain it. I cruised the nice piney section downhill into Geronimo, splashed across the creek (almost running into a photographer because my head was down negotiating the water), skipped the aid (split of 1:10), and started up the switchbacks leading out of the valley. As I was winding up the hill I expected to see Josh and Bradley right behind me but I’d somehow already opened a minute or so gap on them. That would be the last time I would seen any other runner the whole race (which made for a pretty lonely day).

On the next section over to Washington Park (17 miles) I just focused on running smoothly, comfortably, and efficiently. I was trying to make up for what I thought had been a little bit too quick of a first hour of running. The trail in this section actually wasn’t too bad for a while. And then came a completely washed out gulley followed by a bunch of burn and downfalls where I completely lost the trail and was literally running around in circles in frustration trying to get back on track. Eventually I picked it back up, though, and cruised to the Washington Park aid in 2:34.

I’d taken my fourth gel right before the station, refilled my bottles and took my first salt cap as I was heading out. It wasn’t hot at all yet (the day would top out at only 80 degrees or so), but I was sweating pretty good and wanted to stay on top of my electrolytes. It was during this section that I also saw at least two dozen elk (very cool) and the first of two rattlesnakes that I spontaneously jumped over because it was laid all the way across the trail (not so cool).

The next 7 mile section over to the remote Hell’s Gate aid station went surprisingly quickly (I think it’s probably a touch short). I just kept doing my thing: enjoying the technical challenge of the rocks and running as quickly and efficiently as possible on the smooth sections of trail (yes, there were some smoother sections out there). I filled my bottles again at Hell’s Gate (3:37) in anticipation of the long 9 mile stretch over to Tonto Creek and kept on my way.